Lorne Michaels practically had to kick Seth Meyers out of Saturday Night Live, says the latter.

“He thought, ‘I have to give this guy a job or he’ll stay at SNL forever – he’s been here 12 ½ years,” explained Meyers at a recent For Your Consideration Emmy event hosted by NBC.

But he admitted, “I was terrified [to go to something else] because I just hadn’t done the emotional work to leave SNL. I’d been there a such long time.”

Jumping from his seven minute Weekend Update segment to about 42 minutes of content on his current show, Late Night with Seth Meyers, wasn’t without its struggles, said Meyers. “All the work you do on these talk shows before you start doing them is kind of an exercise in futility. Until you actually start doing late night you don’t know what its like.

He laughed as he added, “We had a lot of grand ideas. We wanted to do this segment called ‘Newsmakers.’ It was supposed to be like the SNL desk with me and a guest and it went so horribly it was just abandoned.”

Meyers says that about 18 months into Late Night he started feel more at ease. “When we decided to do the monologue sitting instead of standing, that was the beginning of comfort [for me]. Another six months in, I said, ‘ok, I think this is going to work.’ I think you start to feel comfortable because you realize the absence of feeling the other way. Months past and you go, ‘I have not felt abject panic in a while, so that’s good!’”

He credits early influences for keeping him on track. “I went to a public school that had teachers that said, ‘you should work harder. You’re lazy, but you’re good.’”

Talking about his writing staff, Meyers gave props to several people, starting with Sal Gentile. “He writes the first draft of our [in depth] A Closer Look segments. He comes from a news background so he knows how to frame the pieces.”

He also singles out Amber Ruffin and Jenny Hagel for their contributions. “The thing I like about having a lot of women on staff is they bust on you relentlessly. Because, if it’s a room full of guy comedy writers, we have a very false sense about what’s good about us. Just the other day I walked in and Amber was yelling at a guy about the appropriate length of shorts.”

Asked about the political nature of his show, Meyers responded, “When we started doing A Closer Look we were so surprised that people would sit through ten to twelve minutes where we talked about news. So basically we followed the audience lead. Once they said, ‘we’re here for this, we like this,’ we redoubled our efforts to get better at it.”

He went on to admit that there are days that he doesn’t really want to talk politics, saying, “We want to but we don’t want to ignore something that feels vital and important. The bigger issue is that [we want to talk about issues that matter] – like we feel that healthcare really affects more people than this Russia thing — but when the President fires the head of the FBI, I don’t think people want us to say, ‘hey, here’s [more about] healthcare.’”

Meyers said that interviewing others was the part that he was most worried about going into this. “I want to get better at it, but in a weird way, when I start interviewing people, it feels like the work part is over and now it’s just talking to this person. If you can frame it that way in your mind it probably feels that way to the audience as well.”

One particular interview that he mentioned was with Kellyanne Conway, who serves as Counselor to the President. Meyers said that he finds her ‘slippery,’ but that having a live audience during their discussion helped. “It sort of took away her footing [in a way, because the audience reacted to what she was saying]. So I was talking to [CNN’s] Jake Tapper and Anderson Cooper and I said, ‘you have to get a live audience. It’s really helpful.’”

Talking about his ‘competitors’ – Colbert, Oliver, etc. – Meyers said, “I feel we owe a great debt to what The Daily Show and The Colbert Report did – letting people realize that hosts can have a point of view. What we learned from Last Week with John Oliver is that you can do longer pieces if they have substance to them. We’re inspired by the other shows. If you keep it in your own voice there isn’t that much overlap. I feel lucky to be doing this at time when people are doing it at such a high level.”

Meyers points to comedienne Joan Rivers as one of his favorite guests, saying, “All she did was tell jokes for ten solid minutes. She was so relentless. She was a joke machine. That was really inspiration.”

On the flip side, he said that there’s a certain group that make the worst guests. “Politicians that are running for office, and it doesn’t matter if they’re democrat or republican. They act like they’re on Meet the Press and they give long-winded answers and you have to cut them off. It’s a shame because they don’t realize that this is a night to appeal to a different demographic.”

Looking at the future of the show, Meyers remarked, “The part of this that’s been so exciting is that since you do it every day you can evolve. I have no idea what it will be like in 15 years, but I was so worried that my job after SNL would be boring. This job isn’t boring yet. I know it’s only been three years but my only prayer for year 15 is that it’s still not boring.” 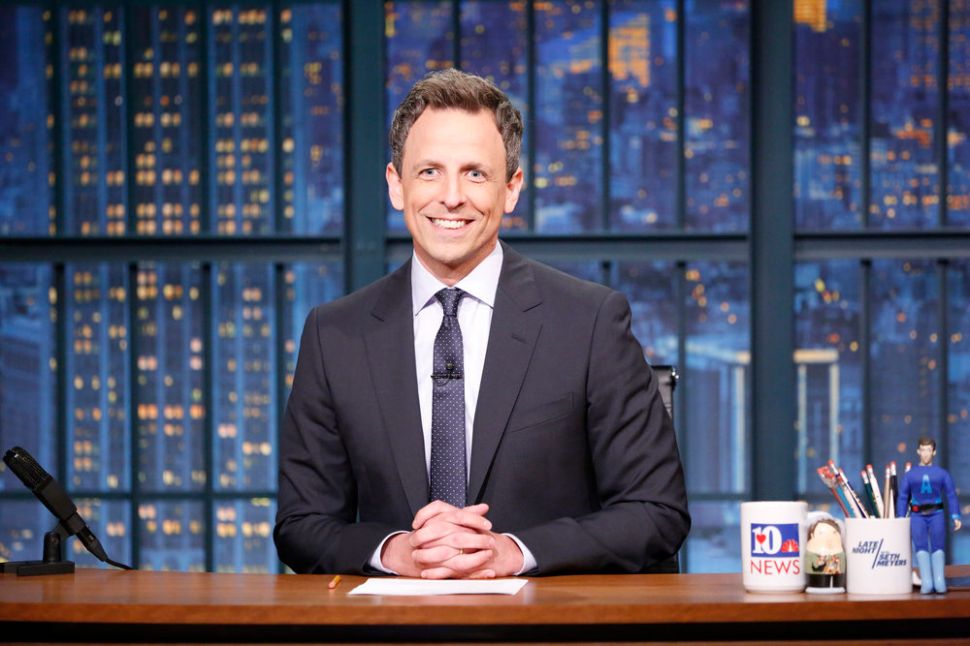