Rev. Al Sharpton and the family of Eric Garner—the black Staten Islander who died in 2014 in the chokehold of NYPD Officer Daniel Pantaleo—told reporters their conference this afternoon with the U.S. Department of Justice yielded no indication of progress on the civil rights investigation into the killing, but did assure them that the probe is still open and ongoing.

The National Action Network founder joined the widow, mother and daughter of the deceased and their attorney at the Brooklyn Marriott Hotel for a meeting with senior federal civil rights prosecutors for a briefing on the state of the case. They reported to the press afterward that the Justice Department had not disclosed any fresh information nor provided a timetable for either closing the case or bringing charges against Pantaleo or any other officer.

But the government, which arranged the meeting, did confirm that the investigation remains active for the first time since the inauguration of President Donald Trump and the installation of Attorney General Jeff Sessions—who has sought to scale back President Barack Obama’s oversight initiatives on local police departments.

“It’s been almost three years since the death of their husband, their son, their loved one, and they’re very frustrated about that,” said Jonathan Moore, lawyer for the Garners, recalling that Pantaleo and his peers at the Staten Island street corner where Garner died filed inaccurate police reports. “They are guilty of serious misconduct. We are hopeful, and continue to press our case that they all be indicted.”

Sharpton argued the Garner case is freighted with a special symbolism: first, it occurred in July 2014, just before the killing of Michael Brown in Ferguson, Mo., and helped galvanized the nascent Black Lives Matter movement. Second, it took place in the city where Trump was born and spent nearly all his life.

“A lot of people don’t understand: the nation is watching this case, because this case was the beginning of a wave of calls for justice,” he said. “This is the president of the United States’s hometown. This is where Trump is from. The whole world will see if in his hometown you can choke a man to death.”

“If in Trump’s hometown, there will be no charges, that will be a global notification of the state of police-community affairs,” he said.

Pantaleo has already avoided charges once: a grand jury impaneled by then-District Attorney Daniel Donovan declined to hand down an indictment in 2014. He continues to serve on desk duty at the NYPD, and the department has declared it cannot pursue its own investigation into potential misconduct until the conclusion of the federal probe.

Sharpton noted that one of the prosecutors he spoke with today, Deputy Chief Paige Fitzgerald, is a department veteran with whom he worked on the case of Walter Scott. Charleston Officer Michael Slager shot the fleeing Scott in the back in 2015, and eventually pleaded guilty to federal civil rights charges earlier this year.

Garner’s mother, Gwen Carr, lamented that federal investigations into later police killings had concluded before the probe into her son’s death.

“Once again, we have to be playing the waiting game. We came here today for answers, but evidently we must still wait without knowing whether we are going to get justice or not,” she said. “They have to give us some answers, and we hope that they are the right answers.”

“It doesn’t matter who the president is, it’s still about justice,” she added.

Garner’s daughter Erica declined to make a statement at the press conference, but vented her frustration on social media shortly afterward.

The DOJ literally gathered my family in once place… After we have been waiting for answers for 3 years to say they cant answer SHIT! 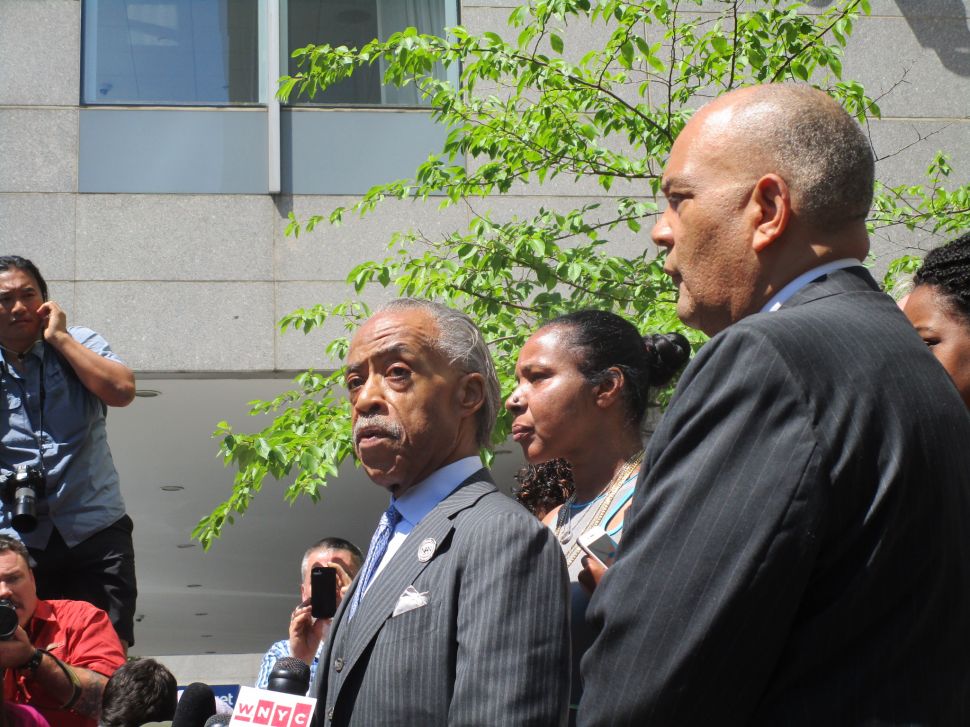