Peak wedding season has arrived and with it has come a deluge of super luxe celeb weddings. The latest over-the-top, star-studded bash took place this weekend on the private isle of Mustique. The island, known for crystal blue waters and white sand beaches, is part of the West Indies and it happens to be where fashion heir Ally Hilfiger tied the knot with long-time boyfriend, Steve Hash.

The duo got engaged in Paris last year, when Hash proposed with a ring of his own design. The couple, who have been together for over six years, originally intended to get married at Hilfiger’s family home in Connecticut, but they clearly had a change of heart and went the tropical route, instead.

Seeing as the bride’s father is Tommy Hilfiger, it comes as little surprise that the designer was responsible for creating a white gown for the special occasion. He whipped up a simple v-neck silk gown and rather than going with a traditional veil, Tommy created a hooded cape with blue embroidery, which we assume was the bride’s something blue. Hilfiger was walked down the aisle by her father, who really leaned into a casual beach look in a khaki suit, white shirt and absolutely no tie. He did, however, accessorize with a Panama hat and a pair of cool sunglasses, really rounding off his dedication for the island vibes.

She is beautiful , full of kindness and love and absolutely a goddess , love u ally ! #wedding #celebratinglove #love #spirit #magnificent @allyhilfiger

Hilfiger, who is the author of Bite Me: How Lyme Disease Stole My Childhood, Made Me Crazy, and Almost Killed Me opted for an outfit change following the ceremony. Per Instagram, she slipped into something even more boho than her first look: a lace halter gown with a choker detail, sheer long sleeves, an open back and a huge brown leather statement belt with gold accents. Her groom wore a white linen suit, while the couple’s two-year-old daughter Harley was dressed in a flouncy white gown, to match her mother’s.

While Rolling Stones’ Ronnie Wood played guitar for the procession, Harley served as the adorable flower girl. Skrillex took care of the rest of the musical experience for the evening, reportedly curating all the playlists by hand.

Though the couple has remained mum on Instagram regarding details on the weddings, their close friends have taken the liberty of sharing what exactly went on. One guest wrote: “There has never been more laughter, more love, and more lobster shared at one table in the history of the world,” while another commented on the “unimaginably long dinner table for the wedding reception.” It seems following dinner, the guests danced under the stars and truly had a “magical” and “soulful” time.

All things considered, this might be the most luxe and lustworthy boho fashion wedding of 2017…unless Anna Wintour‘s daughter, Bee Shaffer decides to tie the knot with her fiancé, Francesco Carrozzini, in the next few months. 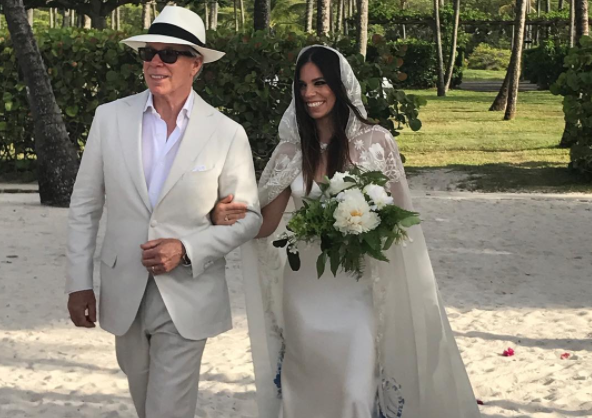