Vinnie: So! Before we even get into the “Coming to America” segment, which took up a solid three-quarters of “A Prayer for Mad Sweeney,” the most important development of the episode involves the death of Laura Moon. Not only was Mad Sweeney responsible for the car crash that killed Laura and Robbie, but he did so at the request of Mr. Wednesday. “Tell him it’s done,” Sweeney tells Wednesday’s little crow buddy, standing over Laura’s dead-but-not-yet-revived body. A couple things here:

Drew: Good and bad…why should these labels apply anymore to Gods and faeries than they do to say, Laura Moon or Essie McGowan? If we’ve learned anything this episode, it’s that gods are as fickle and temperamental just as often as they are benevolent or sit in any sort of judgement of us mortals.

Yeah, I guess that’s the other weird thing: all the players on the board that are deities? They kind of act like humankind doesn’t exist farther than their exclusive fan-base. It’d be like trying to get the news by only reading your @ replies on Twitter. Mr. Wednesday is working off an old template: one that involves gods that act more like Frank Underwood than Captain America. Maybe, in his own, twisted way, Mr. Wednesday believes he’s helping both Shadow AND himself by getting the dead wife out of the way. That way, natural order (LOL) is restored, and Shadow can keep his eye on the War-ball.

I mean, it’s not too hard of a leap to see it Mr. Wednesday’s way: lady is straight-up death walking, she’s going to be a pile of rotten flesh soon, and bitch HATED BEING ALIVE in the first place! So actually, the CRUELEST move— though born out of good intentions and a LOT of Pablo Schreiber’s incomprehensible cursing— was bringing Laura back to life after they Ice Cream Truck Incident. (Name of my ska band, by the way.)

Vinnie: Like I said, a significant portion of the episode was a “Coming to America” story, straight from the quill of Mr. Ibis (do him and Mr. Jaquel just run that funeral home/the afterlife? Are they a couple? I’d ship it). It’s essentially the story of how leprechauns went from being Irish folklore to American cereal spokespeople, told from the perspective of a woman named Essie McGowan (Emily Browning, cosplaying as the girl from Pixar’s Brave). Essie is a kitchen worker in 18th century Ireland who always makes sure to leave food for the faery-folk outside her window. Unfortunately, the faery-folk’s blessings aren’t strong enough to stop the local country club’s bitchiest housewife from falsely accusing Essie of theft, nor a judge sentencing her to “seven years transportation.” Or, as we know it today, “driving through the Holland Tunnel at 5 PM.”

Drew: Fuck you Vinnie, for stealing my Brave joke. But also! I love that we finally got some clarity on how leprechauns fit into the whole God model. “I was a king once. Then they made me a bird. Then Mother Church came along turned us all into saints, made us trolls and faeries. Then General Mills did the rest.”

Now that is great for clarity: maybe Gods can not be former mortals, like Mad Sweeney was? I mean, Jesus was a mortal, but his dad was God or something, so he’s more like Hercules. Maybe the other fantastical creatures are ALL former humans, doomed to live out their life forever like Eric on that one season of True Blood where we had to get all those INSANE Norse flashbacks.

However, belief in leprechauns MUST have waned in the last century or so. Does that affect Mad the same way it affects the Gods? Or does it literally not matter how many people believe in Tinkerbell, because bitch is stuck being Tink now. The idea that the Lucky Charms box created a false idol for children to worship doesn’t seem to have any negative force on Mad, so again, maybe he just bristles at the stereotype.

Vinnie: Luckily for Essie, the bowels of a wooden sailing ship slick with the blood, shit and vomit of criminals turns out to be a pretty swell dating spot. She seduces the captain, who agrees to take her back to London. After assuring him she’ll totally not pawn his silverware and leave while he’s off at sea, Essie…does exactly that, and starts up a life of crime because all that leprechaun bread isn’t going to pay for itself. But the leprechauns are super helpful! The more offerings Essie leaves, the luckier she is and the longer she goes without getting caught. But, as Mr. Ibis writes in his insanely well-looped cursive, “the more abundant the blessings, the more we forget to pray.”

Drew: Also unclear were show notes, which said this episode was about “Mad Sweeney’s long, winding, and often tragic past is explored.” Did I miss something? Mad Sweeney running away from a war and then fucking with Criminal Strawberry Shortcake for the length of her ENTIRE life doesn’t exactly strike me as tragic. It’s more like “Yup, sometimes you forget to set out mead and Pornstache gets grumpy and sends you to death row to swear it out for a bit.

Vinnie: So, a couple questions about Essie meeting Mad Sweeney in prison, before she has sex with that guard for a get-out-of-hanging baby and gets transported to America again. That was actually Sweeney, correct? Or do all leprechauns look the same? Like, Mad Sweeney can’t be the only leprechaun. Furthermore, what are the logistics of keeping a leprechaun in jail? Can they hand out blessings but not self-bless themselves? Couldn’t a leprechaun in jail just luckily find a spare key under the mattress?

Drew: Nah man, this was more like a test. Mad Sweeney still has his coin at this point, he makes his own luck. (™ Billy Zane, Titanic.) See Essie, she’d forgotten where she came from, and stopped leaving little tributes to Mad, who OF COURSE is the same Mad Sweeney, and the doubling-up on casting for Essie and Laura is supposed to give you, as a viewer, a head’s up to why he decides to save Laura. She reminded him of Essie. And in the jail cell, he was trying to test Essie’s faith, to see if she still believed in the stories. And yes, along the way, he got a hot tip about the Americas, but who said Mad can’t multitask.

Vinnie: It’s hilarious that Essie, at this point living in America and aged into the old woman that taught her faery stories because time is a flat circle, harrasses a little girl into crying and is like “this country has no time for magic.” Uh, lady, we have plenty of time for magic. David Blaine is basically an American god. What we don’t have time for is crazy old plantation ladies shouting at small children.

I’m also kind of confused as to why Sweeney showed up looking like Mel Gibson in The Patriot to guide Essie into the afterlife. Between Jaquel, Ibis, and this tall-ass leprechaun is there any god or myth that doesn’t greet you in death?

Drew: Well, that’s a little trickier/ Remember Mads telling Laura who is trying to cheer him up about his MIA combat status: “I’ve done much worse than that” in this plaintively sad way. What if he didn’t take Essie to the afterlife as we think of it: heaven or hell. What if he took her somewhere else? What if has her tied to a table back in his leprechaun hut somewhere? I mean, not to get too SVU on this, but Schreiber was the BIGGEST BAD ON SVU!

Vinnie: Between Back in the modern storyline, Laura and Sweeney part ways with Salim, who heads off to highway roadside attraction The House on the Rock, Wednesday’s planned meeting place for his assembled god army. If it’s two things gods love, it’s 1) coercing the human race into millenniums of blind devotion through fear and punishment, and 2) old-timey funhouse carousels.

Drew: TBF, that’s the two things that get me off as well.

Vinnie: Since Salim takes his taxi with him, Laura and Sweeney steal an ice cream truck from a man who definitely didn’t need to get punched in the face, but asks anyway, I assume because he enjoys it on a sexual level. What do you think that guy’s “Coming to America” story is like?

Drew: Nah, he’s got a point. Unless he’s bloodied and bruised, there’s no way that the god of Good Humor bars isn’t coming after that driver.

Vinnie: Anyway, Laura flips the ice cream truck, wasting dozens of those Teenage Mutant Ninja Turtles pops with the gumballs for eyes in the process. A shame. Also a shame: Sweeney’s lucky coin falls out of Laura’s body in the wreck, rendering her a normal corpse once again. But Sweeney gives it back, maybe, possibly because Laura’s great-great (great?) grandmother brought him to America and still gave him hella window bread. Or maybe not! It’s slightly unclear, but I kind of love Sweeney turning into the moral center of this war between iPhones and rosary beads. He’s not American OR a god, he’s just kind of getting tired of everyone being a dick. 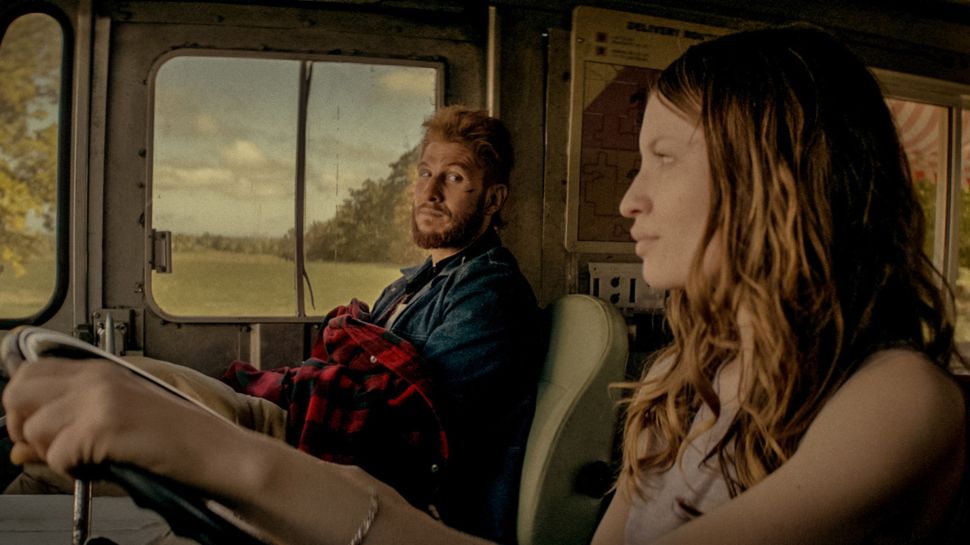