This is the first entry in a new column highlighting movies and TV series that have not been released on DVD or Blu-ray or have been out of print for too long.

While there are plenty of tough female cops kicking ass on television today, it was not so much the case back in 1985 when ABC’s Lady Blue debuted with an explosive pilot that generated critical controversy. Star Jamie Rose had spent two and a half seasons portraying Vickie Gioberti on the prime time soap Falcon Crest, but jumping into the role of trigger happy Chicago detective Katy Mahoney took her into a whole new world, particularly for someone who began her career at age 6 go-go dancing with Bugs Bunny in a Kool-Aid commercial. Despite (or perhaps because of) her violent excesses, the fiery cop with the fiery red head won over many young men and teens, this writer included. She was ballsy and beautiful. Swoon.

“Action shows are so fun because I got to be strapped to things, hoisted over things, shoot the gun, and jump on moving cars,” recalls Rose. “It was like doing a western.”

The set up for ABC’s short-lived series, which ran for 14 episodes during the 1985-6 season, revolved around Det. Mahoney’s harsh tactics for dealing with criminals and the friction she generated with her superiors, although her immediate boss  Lt. Terry McNichols (Danny Aiello) was a sympathetic ear. Just watch the opening scene from the pilot below. In the middle of a hair appointment, Mahoney spies a bank robbery in progress, so she steps out with her .357 Magnum and waltzes right into the bank to confront the perpetrators. While she guns down three of them, one gets away, but Mahoney shoots at his car and causes him to crash. Then she nonchalantly struts back to the salon. Just another day on the force.

While Wonder Woman and Charlie’s Angels had been the mainstream face of TV action heroines in the late ’70s, Lady Blue was in a different league in 1985.  As Rose recalls, her show was more in the vein of the ’70s series Police Woman with Angie Dickinson (both shows shared the same executive producer, Danny Gerber) and Get Christie Love! (The Emmy-winning Cagney & Lacey were also hard-edged ’80s cops, but their show was decidedly less violent.)

“There was a little bit of a precedence for that type of character, but not as bloodthirsty,” laughs Rose about Mahoney. “They called her ‘Dirty Harriet’. It had the most action and violence of any show on television at the time. It was really panned for that reason. Of course, it’s nothing compared to what you see now.”

One memorable episode of Lady Blue, “Death Valley Day,” was partially filmed in Chicago’s notorious Cabrini Green projects. Mahoney was trying to bring down a fearsome gang leader named Alvin Banger who ruled a housing project known as “The Heights,” and from my recollection, the hulking villain pursued on her foot in the climactic showdown. She did not have her gun and knew he was big enough to kill her with his bare hands. It showed a vulnerable and human side to a cop who seemed larger than life on the small screen.

It turns out that filming that particular episode was no picnic either. “We were shooting in Cabrini Green and had been there all day, and the people who lived there started getting restless and tired of us,” reveals Rose. “They started throwing bottles while we were shooting, and the police finally said ‘Go!’ We had to run because people were getting kind of violent and sick of us being there.”

A bright side to working on the series was her co-star, the (later) Oscar-nominated Danny Aiello. “I enjoyed him tremendously,” says Rose. “He really was a Sopranos kind of character. He had his best friend who hung out with him. He had this guy work as an extra, and we called him Detective Joe Background because he was always in the background of scenes.”

Rose was 25 when she started filming the series, and she says she suffered from terrible insomnia then. “I’ve been sober for almost 35 years, and I didn’t drink or take drugs then,” she says. “I had been sober since I was 22, and I wouldn’t take sleeping pills so I literally stopped sleeping and would just read books all night. I would just cry and be so tired. I would say to Danny that I felt like I was losing my mind, and he would just hug me. He was very paternal and very sweet with me when I was young actress, and it meant a lot to me.” She adds with a laugh, “I don’t know if he’d like it to be known that he was like my dad on set.”

After Lady Blue, Rose moved forward with her acting career, predominately with a slew of guest appearances on television series including St. Elsewhere, Murder, She Wrote, Chicago Hope, Ally McBeal, and most recently Jane The Virgin and Grey’s Anatomy. She co-starred as a biker in the 1989 cult horror comedy Chopper Chicks in Zombietown and played a psychotherapist who fought Janine Turner in the 2007 TV movie Primal Doubt. Pretty bad ass for a gal who is “not a bad ass physically in real life.”

Beyond screen time, Rose ran her own acting studio for awhile and wrote the book Shut Up & Dance—The Joy of Letting Go of the Lead, On the Dance Floor and Off which was published in 2011 by Penguin Books. Raised by a “song and dance man” and a dancer mother, the actor studied dancing when she was younger. While Rose does not consider herself to be professional level caliber, her training did help her with fight choreography and finding the rhythm in looping dialogue.

The redhead thespian admits to having gone through a tough time after the end of Lady Blue, and the way she coped with it later lead to her current passion, being a life coach for The Tools, which are therapeutic life procedures that were co-developed by Philip Stutz and Barry Michels who co-authored the best-selling book The Tools: Transform Your Problems Into Courage, Confidence, and Creativity.

“I first went to Phil in the ’80s for my acting because I had come off of Lady Blue and Falcon Crest and started auditioning and I wasn’t booking immediately,” says Rose. “I really lost my nerve and started getting really bad performance anxiety, and I went to Stutz to help with that. The stuff he teaches, The Tools, I’ve used for years with my acting clients and with myself to help with performance anxieties of all kinds. It’s now been extended into all of my life.”

Rose admits she does not really look back on Lady Blue and views it as a different life. It was fun at the time. Katy Mahoney’s steely nerve and conservative stance on crime certainly clashes with alter ego’s more upbeat, fun-loving, liberal persona in real life. Jamie Rose has moved on.

“I’m 57 now and love acting as much as I ever have, but I have no real interest in the business anymore,” says Rose. “I don’t reject it, but I’m not interested in putting a lot of time into it anymore. I’m interested in helping people live in whatever their profession is.”

While Lady Blue did not last long on the air due to controversy and low ratings, it left a lasting impression on many devout fans who hope that someday it will get a DVD or Blu-ray release. One with bonus features would be aces. A representative for 20th Century Fox Home Entertainment (which distributes the MGM video library) says that MGM, the studio behind the series, still has the rights to Lady Blue but has no plans for a video release at this time. If Katy Mahoney had any say in the matter, we’d see a release tomorrow.

Politics aside, it would be great to see her in action again. 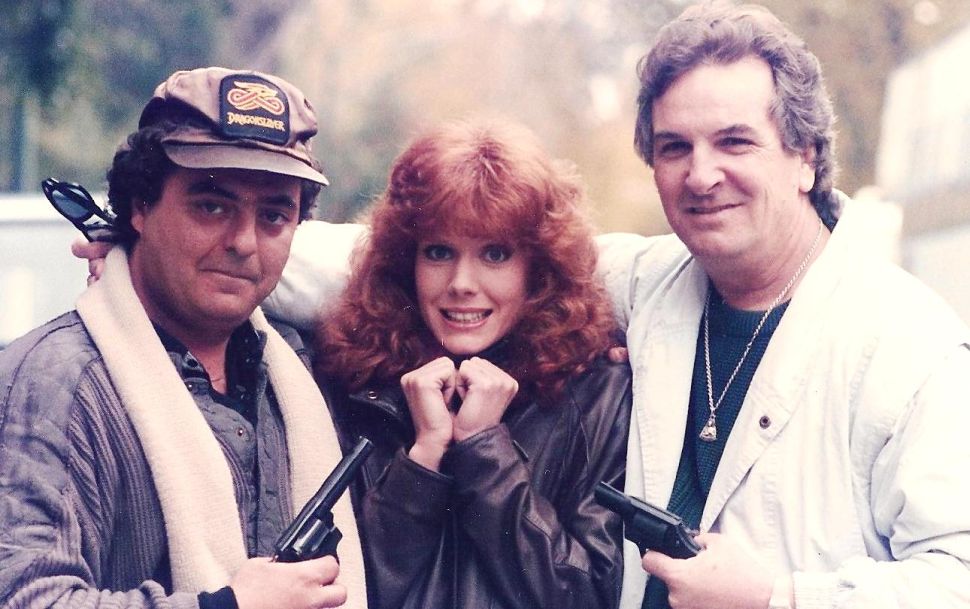