Gov. Andrew Cuomo used the final hours of the Albany legislative session to install Joseph Lhota, Mayor Bill de Blasio’s 2013 Republican foe, as the new chairman of the Metropolitan Transportation Authority—charging the veteran technocrat with steering the city’s s subway system through the morass of breakdowns and delays that have submerged it in recent weeks.

The Republican-run State Senate interviewed Lhota via Skype and voted to ratify the governor’s nomination. In a statement to the press, Cuomo touted Lhota’s record as budget director and deputy mayor to former Mayor Rudolph Giuliani, and his previous stint as chairman and CEO of the MTA from 2011 until 2012—during which time Lhota dealt with getting the trains running again after Hurricane Sandy.

“Joe Lhota is a tested and experienced leader with the proven track record needed to address the enormous challenges facing the nation’s largest mass transportation system,” the release reads. “There is much hard work to be done to address the MTA’s current failures, and the level of service and daily frustrations commuters are experiencing are completely unacceptable. I know Joe will move to address these issues immediately and ensure a reliable and effective transportation system worthy of the city it serves.”

During his previous tenure atop the MTA under Cuomo, Lhota also voted to hike fares on subways and buses and tolls on bridges and tunnels. He stepped down in 2012 preparatory to his unsuccessful mayoral run, and was eventually succeeded by Thomas Prendergast, who resigned in January.

Lhota will hold onto his current job as senior vice president, vice dean and chief of staff at NYU Langone Medical Center, and only draw a salary of $1 a year from the MTA. The daily oversight duties that usually fall upon the chairman and CEO will instead go to an as-yet unidentified executive officer, with Lhota handling the larger and more complex issues facing the entity long-term.

“This is an incredibly challenging time for the MTA and we will immediately and aggressively tackle the problems the system is facing after decades of disinvestment,” said Joseph Lhota. “Working together we will rebuild the system and improve service for all New Yorkers.”

In recent weeks, Cuomo has moved to increase his power over the MTA while denying any responsibility for its failures. The governor appoints the MTA board and nominates the largest plurality of its members, on top of picking the chairman and laying out its budget, and he has readily taken credit for his successes—only to plead impotence amid the recent spate of system failures.

This week, he took the strange step of proposing legislation that would allow him to appoint two additional members to the body’s board. He has repeatedly highlighted the state’s allocation of $5.4 billion to the entity’s $32 billion repair and improvement plan, and demanded de Blasio chip in more.

The governor has also come under criticism for financing superficial projects like completing small section of the long-overdue Second Avenue subway line and outfitting city buses with wi-fi, while the neglecting the deeper and less glamorous problems plaguing the rail network. He has blamed the mounting breakdowns on the time required to manufacture new subway cars and replace signal systems, even though he has been in office for more than six years.

It is unclear how political dynamic between the Democratic governor and mayor—who have feuded for most of the latter’s term in office—and Republican transit head will play out. Prendergast appeared often to assist in Cuomo’s frequent tweaking of de Blasio: shutting down the train and bus system ahead of a 2015 snowstorm with no advance notice, and penning a letter to City Hall later that year demanding an additional $3.2 billion for the MTA on the eve of the mayor’s executive budget rollout.

However, Lhota has publicly praised de Blasio’s new city ferry system and plans to construct a street car connecting several up-and-coming Brooklyn and Queens neighborhoods—transit solutions the mayor proposed explicitly to circumvent the MTA. He has also used his Twitter account to share comments critical of de Blasio’s habit of regularly using a city motorcade to go to the gym in Park Slope.

De Blasio crushed the GOP contender by a three-to-one margin in the general election in 2013. 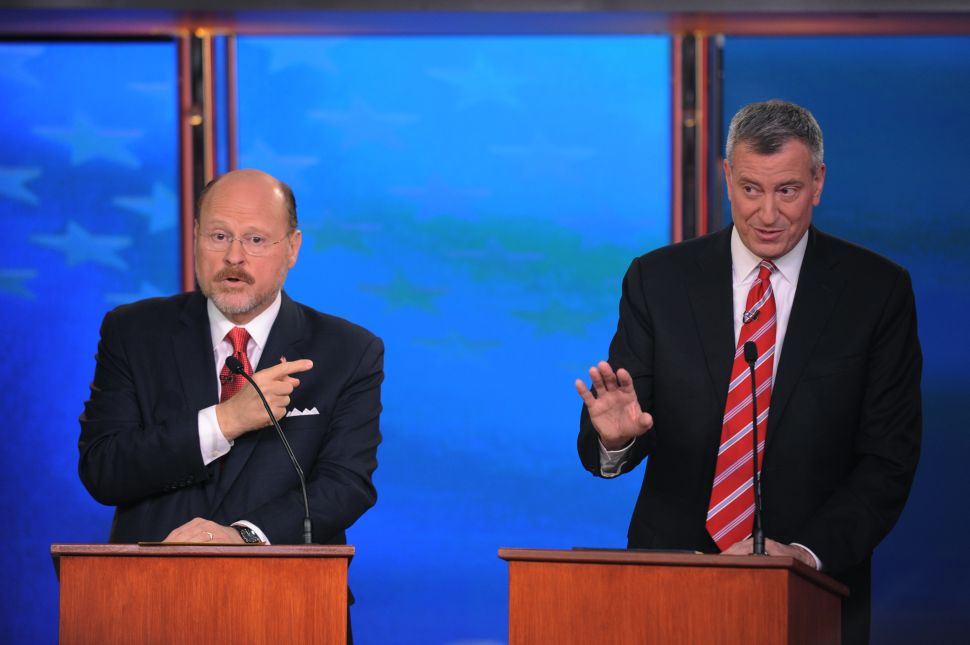