Gov. Andrew Cuomo took a big stride onto the national stage today with a powwow at the Javits Center with organized labor and House Minority Leader Nancy Pelosi, intended to arouse enthusiasm for 2018 Democratic congressional candidates—but members of International Brotherhood of Electrical Workers Local 3 complained to the Observer that the politicians scarcely acknowledged their months-long strike against Charter Communications, the owner of Spectrum cable.

Chants of “Local 3” and “Spectrum unfair labor practices” were by far the loudest in the room, as the rest of the assembled union members stood largely in silence through speeches by Lieutenant Gov. Kathy Hochul, National Organization for Women NYC President Sonia Ossorio, American Federation of Teachers head Randi Weingarten and actors John Leguizamo and Steve Buscemi. Pelosi drew some response with lines about “union rights” and attacks on the GOP efforts to repeal and replace the Affordable Care Act, but she—like the other speakers—did not once acknowledge the cries of the cable technicians, who walked off the job at the end of March after failing to reach a deal on a new contract.

It was only as the calls from the striking workers rose to a crescendo during Cuomo’s speech that the governor made a single glancing reference to the labor battle.

“And you do it with Local 3, who we stand in solidarity with,” Cuomo said,

But it wasn’t enough for the IBEW members the Observer spoke with, who showed up to the rally expecting to hear a full-throated endorsement of their clash with Charter.

“I was a little disappointed,” said member Wesley Cureton, who told the Observer that he had come expecting more attention to his union’s pressing issue. “We’re on strike right now, trying to make our voices heard. We need every advertisement possible.”

Jeff Sosa, an outside plant engineer, used even stronger language.

“Just one line, and he didn’t mention we’ve been out here for 72 days already, over two months,” said Jeff Sosa, a number of his nearby peers nodding as he spoke. “It’s very disappointing that we came out to support the governor here, and we didn’t get his support. He should have said at least—sent a clear message to Charter, to the CEO to give us a fair contract.”

The IBEW has taken issue with Charter’s demand that the company pay less toward pensions and health benefits, while workers contribute more. The union has also pointed to the $98.5 million compensation package the communications giant gave CEO Thomas Rutledge last year.

Kelmy DeMorizi, another technician, told the Observer he also showed up believing the Democrats would directly address the contract fight. Still, he said he was glad to see the display of labor unity for progressive issues at the Javits Center.

“We’re here, so he knows why we’re here,” DeMorizi said of the governor.

A Local 3 official reached out to the Observer following the publication of this article, and maintained that the members’ critical remarks about the governor were “not representative of the union.”

“Governor Cuomo has fought for our brothers and sisters in labor since day one, and we were proud to be there today to support strong Democrats who will champion the middle- and working-class New Yorkers who built this great state,” said business manager Christopher Erikson. “The governor once again made clear his unwavering support for IBEW Local 3.” 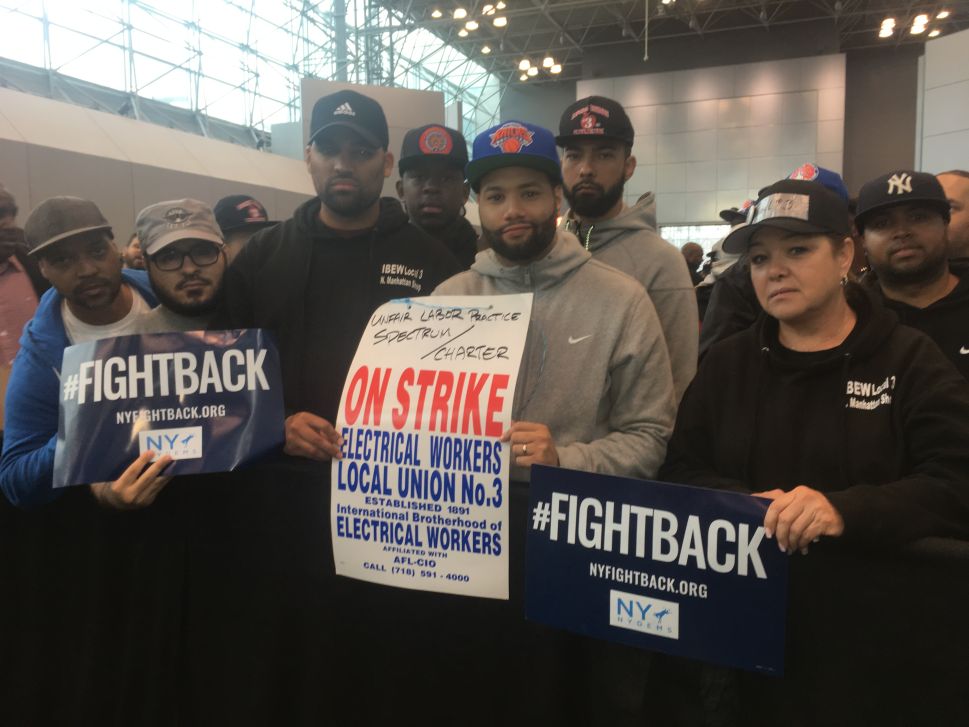