The world’s most prestigious contemporary art fair is in full swing at Art Basel in Basel, Switzerland. For the fair’s 48th edition, 290 galleries from all over the world have set up shop, bringing with them their most impressive offerings and in some cases creating immersive installations to wow visitors and, as has become customary, tantalize those of us unable to make it to Europe via Instagram. From the VIP preview on June 13 through the weekend crush that’s already begun, here are the artworks and installations that Instagram users can’t stop posting about.

Artist Subodh Gupta is serving up Indian fare under a canopy of old pots and pans to visitors in his installation Cooking the World, which runs four times a day through Sunday. “I love cooking, and food is my passion,” Gupta told the Art Newspaper about the work. “Offering and serving a meal is an act of inclusion and community, and I like to know that my food will be entering your DNA.”

This colorful couple sculpted by artist Urs Fischer are named Bruno & Yoyo (2015), after legendary Swiss art dealer Bruno Bischofberger and his wife. The work, which is made of paraffin wax is actually a giant candle intended to be burned, according to artnet News, and is being shown by Gagosian Gallery.

Peter Regli’s Reality Hacking No. 313 (2014) at Levy Gorvy has Instagrammers both blushing and captivated. The five giant pillars—which include a bear and a phallus—are carved in wood by chainsaw, and are meant to evoke “a healthy dose of absurd sanctitude,” according to Art Basel’s website.

Song Dong’s hall of mirrors-style installation Through the Wall (2016) at Pace is a disorienting and enchanting work that features twinkling lighting fixtures suspended above a mirrored floor and flanked by framed, mirrored walls. For the best view from afar, check out the short video clips of the work making the rounds online.

The late American artist Chris Burden’s flying sculpture, Ode to Santos Dumont (2015) was his last finished artwork. Now, Art Basel fairgoers are getting a glimpse of the piece in action for the first time, as it cruises gracefully a few feet off the ground in a circle in the Unlimited sector, courtesy Gagosian gallery. “It stands for all the radicality of his position and his fearlessness of making things happen that seem to be impossible,” Unlimited sector curator Gianni Jetzer told Artnews.

And finally, John Baldessari has taken some cues from Surrealist masterpieces with this living installation featuring a white dog named Goliath, a blonde model reclining on an chaise lounge which resembles a human ear, and two nose-shaped planters, reports artnet News. 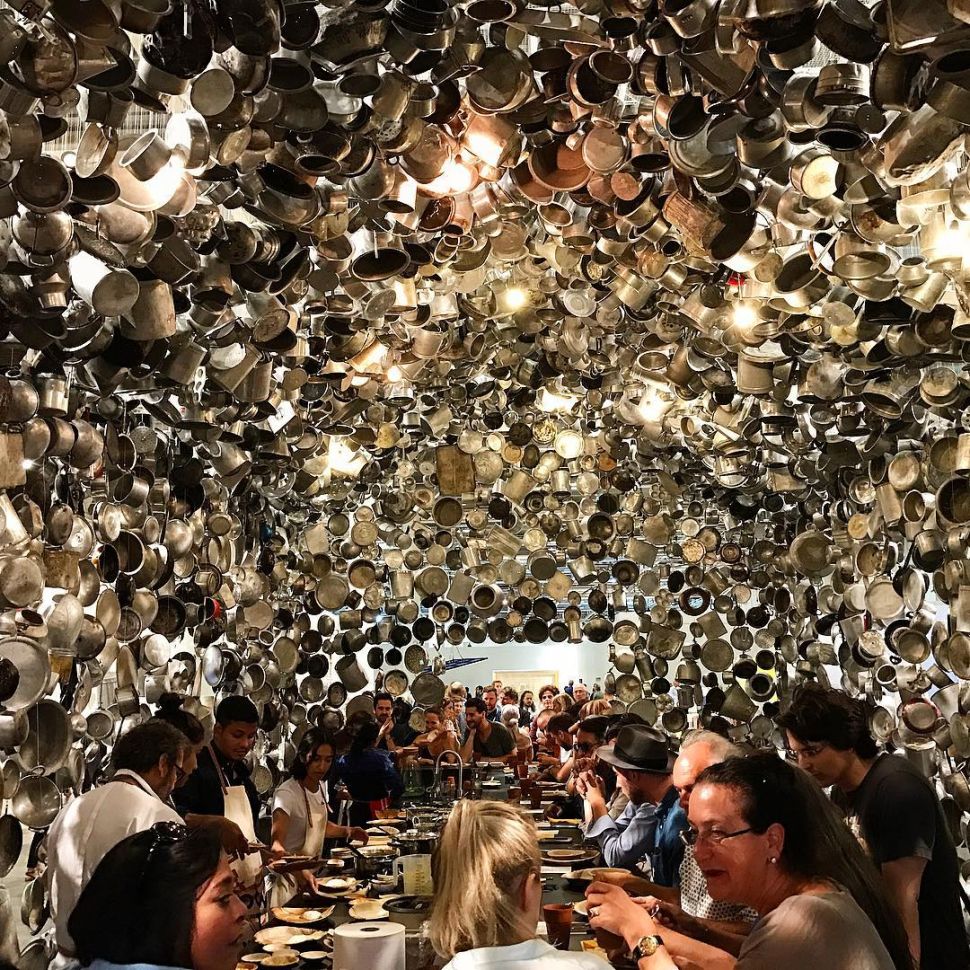