Bay Ridge Muslims held a community vigil outside of the Arab American Association of New York headquarters in honor of a 17-year-old black Muslim teenage girl who was assaulted and beaten to death in Virginia while walking back to her mosque with friends.

Nabra Hassanen was beaten and murdered last Sunday as she walked back to her mosque, the All Dulles Areas Muslim Society, following a pre-dawn meal with her friends as part of Ramadan, according to NPR. Darwin Martinez Torres, 22—who is facing second-degree murder charges—pursued the teens with a baseball bat, and her body was discovered in a pond near a parking lot. Police are currently searching for proof that Torres sexually assaulted Hassanen before murdering her.

Fairfax County police have called it a road rage incident, but Muslim leaders and community members want authorities to look into it as a hate crime.

The vigil, organized by the Arab American Association of New York and held outside its headquarters following the Jummah prayer, drew roughly 50 people—both Muslim and non-Muslim—and sought to provide community members the chance to reflect and process the tragedy. After a few speakers, the vigil opened up for others to share any thoughts they had, with some speaking in English and others in Arabic.

“When stuff like this happens, there is nothing, really, necessarily that anyone can say to you that can really help you process it,” Aber Kawas, director of advocacy at the Arab American Association of New York, told the Observer. “What sometimes people need is a space to get to say what they want.”

She said Hassanen’s story is “really a story of violence against a woman.”

Tahanie Aboushi, an immigration attorney with The Aboushi Law Firm, said Hassanen’s death demonstrates “how much further we really have to go and how much each of us really still needs to do.” She said that what Hassanen was doing at the time of her death was “very typical,” not just of Muslim teenagers but of teenagers in general—giving the example of people who are “up at night and who are hanging out with friends and wanna go out to eat.”

“To the females, don’t stop wearing your hijab,” Aboushi said. “To the males, don’t stop looking like whatever it is you are or where you’re from, whether you’re African, Hispanic, Muslim, Jewish…wear what you wear, believe what you believe, go about your day because when you stop, those kind of people that have done what they did to Nabra, they win.”

Still, she encourages people to “do it with precaution”—prepare themselves but also to pitch in, to find out “how we can stop things like this or at least make it better,” including holding town hall meetings, getting involved with the local community or holding interfaith gatherings. People have to also move past just tweeting or posting on Facebook and take more concrete actions, she said.

“It’s not a guaranteed way to stop what happened to Nabra but it’s a way for you to feel like we’re contributing in the betterment of society,” Aboushi continued. “We’re contributing in educating society not only for people who are not Muslim or who are not black, but people who are so that they know what to do and how to do it and also engage the community because we’re neighbors.”

Kawas told the Observer that the Arab American Association of New York was involved putting together the vigil in Union Square earlier this week that was organized by a group of teenage girls from Women’s Initiative for Self Empowerment. The group, also from Queens, made the vigil because “they felt so bad about what happened.” Kawas said that after they created the event page on Facebook, more than one million people RSVP’d.

They wanted host the Bay Ridge vigil so that there was a space “intimate, and just for the community.”

“We wanted to create something that was very intimate for our community members,” Kawas said. “People who didn’t have access to English. It was mostly English at the other vigil but also some people here don’t have access to travel outside of Bay Ridge.”

The vigil also honored and acknowledged Philando Castile, a 32-year-old black man killed by a police officer in Minnesota—who was recently acquitted—and Charleena Lyles, a 30-year-old black woman shot by police in her apartment in Seattle. Kawas said that mentioning them is “important.”

“We represent an Arab community,” she said. “People always see that as kind of homogenous but we have black Arabs in our community but we also have anti-blackness in our community. That’s a real issue. For us to say black lives matter, we’re not just here to say that as a hashtag or a slogan or just to get some street cred. We’re going to say that because we want to make sure that that is a belief and a practice in our community.”

She said that the best way for the community to understand violence against black people and connect to it “is also connecting to their own experiences and feeling that in solidarity.”

“We need to mourn that this week as well,” she added. “What happened to Nabra happened in a week where injustices happened to other people and we want to put that at the forefront. We’re not just here for justice for ourselves, we’re here for collective justice for our communities.”

Bay Ridge resident Joseph Shahadi, 48, who is Lebanese and Christian, told the Observer that he is disgusted by what happened to Hassanen.

“I feel sick,” he said. “Do you know how many girls like Nabra I see everyday walking down the street in Bay Ridge? It’s sickening.”

Shahadi said that he feels a responsibility to support newer immigrants in the country given his family’s own experiences.

“My family came here in the 20th century and so I feel like it’s the responsibility of those of us who came earlier to stand with folks that are new immigrants,” Shahadi said. “And my family faced racist violence, especially when we were new in this country. I’m here today to listen and stand with my neighbors and follow their lead.” 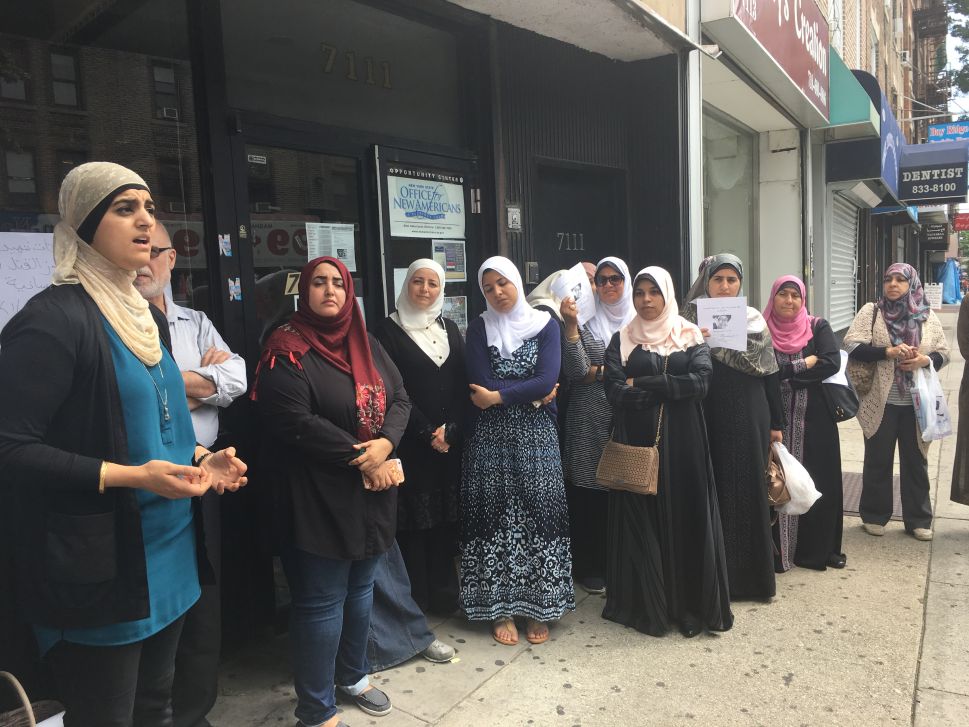