Kim Wexler has lost control. Considering the company her partner and boyfriend Jimmy McGill will soon be keeping, if the worst thing that happens to her because of Jimmy is accidentally driving her car into a ditch, she’s gotten off easy. But while it’s easy to miss amid the fireworks between Jimmy and Chuck or the historical first meeting of Mike and Gus, not to mention Rhea Seehorn’s never-let-them-see-you-sweat performance, but this season has slowly ratcheted up the pressure on Kim to what turns out to be a physically unbearable degree. The episode is entitled “Fall,” and that’s basically what she does.

Kim’s guilt over landing her first major client through Jimmy’s sabotage of Chuck’s files; the even more acute shame over humiliating him before the bar to get Jimmy off the hook; the need to keep the income flowing so that the perpetually cash-strapped Jimmy doesn’t have to—it’s all taken its toll. She’s been burning the candle at both ends for months now, staying up late to compulsively review and re-review every document she files. She takes on an extra client (played by Twin Peaks’ Chris Mulkey) despite being a one-woman shop. She narrowly avoids rolling her idling car into one of the new client’s oil rigs when she pushes it free of loose soil. Something had to give, and the car bit was a neat foreshadowing. One moment she’s driving along to make a key presentation on behalf of the oil guy, the camera lingering on her expressionless face as she stares forward—then BOOM, a literal smash cut to the airbag deploying and her car coming to a terrifyingly sudden stop. When the papers from her files get blown from her broken trunk and fly away, she doesn’t even bother to chase them.

Nacho Varga, too, is perpetually scrambling because someone he works with is an asshole. At a big meeting between Hector Salamanca and Gus Fring, with cartel Juan Bolsa conferenced in via cellphone, Hector defies his bosses’ orders to continue sharing Gus’s supply fleet rather than forging his own. Nacho knows this means Hector will be gunning for his dad’s business, an upholstery company on the up and up. A miniature kitchen sink drama ensues, in which Nacho tells his father that he must go along with the Salamancas, but that it will only last so long before…well, he doesn’t specify, since he doesn’t know if and when Hector will reach for one of the dummy nitroglycerine pills he made and discover it doesn’t do anything for his ailing heart. As always, Michael Mando is a quiet wonder here; you can read every conflicting moment he has during this painful conversation in his eyes like they’re written on them in print. He’s sad, embarrassed, afraid, and desperately full of love for his old man all at the same time. He wants to protect him; he gets kicked out of the house for his criminal recidivism instead.

It’s a marked contrast with things further up the food chain. Looking for a place to launder his money, Mike acts on Gus’s suggestion and shows up for a “job interview” at Madrigal, the multinational concern through which Gus gets a key ingredient for cooking crystal meth. Mike’s interviewer is Gus’s go-between Lydia Rodarte-Quayle, who informs him that the largesse Gus is bestowing on him by setting him up with the company is unprecedented. Mike isn’t fazed about how much respect Fring may or may not have for him; he’s more concerned with the practicalities, from picking an appropriate job title (“security consultant” is what they go with) to asking his new “boss” why she’d take such huge risks on behalf of a drug dealer. “Drug dealer?” she replies. “If that’s all you think he is, then you don’t know Gustavo Fring. No, he doesn’t.

Of all the jobs gone bad in this episode, Jimmy’s is the one that really hurts—even more so Chuck turning on the firm he helped build when his colleagues try to force him out.. Howard has to battle both brothers in this episode, but he saves his best stuff for Slippin’ Jimmy. “It’s like talking to Gollum,” Howard sneers when Jimmy asks him him to make the settlement. It’s a great line, and not just because it conjures the image of Howard Hamlin kicking back with a box set of The Lord of the Rings Extended Edition DVDs during his off-hours. Like Gollum, Jimmy had a chance to go good, was undone by his own greed and resentment, and wound up betraying the very people he pledged to help. And speaking as a person who cries every time Gollum falls into the Cracks of Doom, I’ll tell you what—watching it happen is goddamned sad.

Consider the opening scene, in which Jimmy shows up at good old Sandpiper Crossing Retirement Home to check in with one of favorite elderly ex-clients, Irene. Obviously he turns the charm dial up to a comfortable 9.5 minimum, but he otherwise gives every indication that his continued interest in the class-action suit he helped bring against Sandpiper on behalf of her and other residents is legit. When he discovers that the company has made an offer that his former colleagues at Davis & Main have advised Irene not to accept, he seems so distraught that I figured the episode would focus on his attempt to help the old folks out without running afoul of the terms of his probation. Only when he starts giddily calculating his share of the settlement in the parking lot outside as he leaves did I figure out his real motive for the visit: He sees the settlement as a way to dig himself out of a financial hole, not the people he represents.

So he employs a tactic from the con man’s tool kit  that should be familiar to anyone who’s kept up with Donald Trump’s twitter feed: He accuses others of doing the thing he’s trying to do himself. He can’t persuade Irene, the suit’s class representative, to accept the settlement without the go-ahead from the lawyers. Howard sees right through him on that score, and he’s persona non grata at Davis & Main at any rate. He finds leverage among Irene’s circle of friends among whom he starts a disinformation campaign portraying Irene as a selfish weasel who’s colluding with the lawyers to hold out for a marginally bigger settlement. And why not? Using expensive sneakers he himself gave to her as evidence, he persuades Irene’s friends that she can afford to hold out while her more impoverished pals suffer.

The result is a campaign of ostracization that culminates in one of Jimmy’s bingo-night gigs. This time, he’s rigged the game so Irene will win, drawing even more ire down upon her. She winds up fleeing the room in tears after winning, since none of her supposed friends will so much as clap for her good fortune. Jimmy finds her weeping alone in the hallway and every so gently introduces the idea that maybe they’re upset she hasn’t agreed to settle on their behalf yet. After all, they really need that money, and you know what desperate people are capable of, right? If we didn’t before, we sure do now. 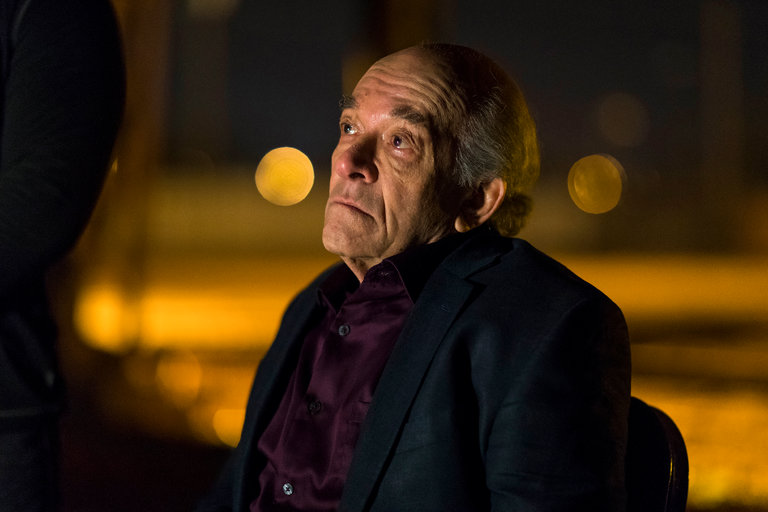