It wasn’t until after the closing credits began to roll on the season’s final episode of Better Call Saul that I realized Mike Ehrmantraut was nowhere to be found. Several times throughout the episode I figured he’d be showing up momentarily. Maybe he’d show up in his handyman guise at Chuck McGill’s house to help him with his electricity problem. Maybe he’d be riding shotgun with Gus Fring during the Chicken Man’s surprise face-to-face with Hector Salamanca. Maybe, as part of some long-game play by Gus, he’d pull the trigger on his frequent ally of convenience Nacho Varga to thwart the younger man’s betrayal of his boss. This last possibility was particularly hard to shake, since it would complete the two criminals’ natural story arcs for this prequel series: Mike would go from regretful ex-cop to cold-blooded assassin, and Nacho would go from main character to whatever oblivion he gets consigned to prior to the start of Breaking Bad.

But no. No Mike. And by the end, no need for him, either. As compelling as Mike’s show-within-the-show has been, Better Call Saul can function just fine without him. It proved this, ironically, in an episode all about how poorly the rest of the characters are functioning. Written by series mainstay Gennifer Hutchison and directed with trademark austerity by co-creator Peter Gould, “Lantern,” BCS’s Season Three finale, saw the hopes and dreams and lives of most of its major players collapse into rubble. Or, as it were, go up in smoke.

The rot starts from the head. Ersatz title character Jimmy McGill may well be flush with the semi-ill-gotten gains of his share of a class-action lawsuit against the Sandpiper retirement home chain. But the episode-ending car crash his girlfriend and business partner Kim Wexler got into last week, caused by the exhaustion brought on by scrambling to cover his share of their bills, has chastened him. The problem is that no one cares. After Kim refuses to let him take the blame for her decision to get behind the wheel on less than an hour of sleep a night, he approaches his older brother Chuck, seeking to patch things up. The elder McGill tells him, in as non-judgmental a way possible, that he’s a born grifter who should accept that hurting people is in his nature. “I don’t wanna hurt your feelings, but the truth is you’ve never mattered that much to me.” This, as it happens, is bullshit so potent as to be literally lethal, but Jimmy has no way of knowing that.

Having at first not succeeded, Jimmy tries again. He pays a visit to his elderly client Irene, the class representative in the Sandpiper suit whom he scapegoated amongst her friends in order to force a settlement. But despite the influx of cash, those friends have not forgiven her, and no amount of mea culpa-ing on Jimmy’s part can persuade them to turn their fury on him instead of her. “I’m not good at building shit, you know?” he says to Kim by way of explaining why he can’t mend this particular fence. “I’m excellent at tearing it down.” But this insight—and Kim’s advice to dip a cheese snack in cheese, because “sometimes you gotta play to your strengths”—unlocks the answer. In an elaborate ruse involving a yoga class, a live mic, and his assistant from the law firm where he got fired for (among other things) not flushing the toilet after he took a shit, he deliberately outs himself as a scam artist who framed Irene in order to enrich himself. He helps this sweet old lady reconnect with the women who wrongfully believed her to be a greedy backstabber, yes. But he also completely destroys his chances at a legit career in a field he was good at, and passionate about. Why did Jimmy McGill bail on a field of law he excelled in to become Saul Goodman, criminal attorney? Now we know.

He’s not alone in bidding goodbye to the majesty of the law. There’s every reason to believe that once she heals, Kim will be back at work. But will it be all of her? Will it be the Kim we knew? It seems unlikely. When her and Jimmy’s unfortunate paralegal lays out plans that would enable her to maintain her practice as-is, her brain basically…shuts off. I’m not sure how else to describe the way actor Rhea Seehorn transitions from the bone-deep weariness she shows in all her prior scenes—at the hospital where she’s being treated, at the crash site where Jimmy scrambles to pick up the files that have been scattered across the wilderness, at home when Jimmy makes her breakfast the next day—into a sort of dead-eyed, “what the fuck am I doing with my life” catatonia. She winds up postponing her Mesa Verde business, canceling her new oil-business client entirely, and binging on junk food and Blockbuster Video like a college student. (I guess that dates me a little.) What does she have to lose, really? “I’m changing the world by helping a mid-sized local bank become a mid-sized regional bank,” she says to Jimmy. “So yay me.” She rallies somewhat when they have to clear out their offices to sublet the space, but c’mon. The fire is out.

Contrast Kim’s arc of erosion and depletion with that of Nacho Varga, who ends the episode looking and feeling more satisfied than anyone’s been on this show in a long, long time. And why not? His plan worked! After watching his hard-working dad get big-dogged by his awful boss Hector Salamanca, who seems unlikely to let the man live for much longer, Nacho resigns himself to conducting a good old-fashioned murder to save his father. But Hector’s previously scheduled engagement with Gus Fring and their mutual boss Juan Bolsa eliminates the need. Salamanca screams himself into a cardiac episode, and the dummy pills Nacho planted on him do their work. Gus labors valiantly to keep his hated enemy alive (he never stops playing his role), and moreover he seems to have intuited Nacho’s pill scheme, but that’s a matter for some other time. For now, everything you need to know you can see in actor Michael Mando’s beautifully expressive eyes. He won.

So did Chuck McGill, to hear his now ex-partner Howard Hamlin tell it. In the gorgeously shot sequence that helps open the episode (following the portentous cold-open flashback in which young Chuck assures young Jimmy that everything will be alright in the story they’re reading by lantern-light together), Howard faces the older man down across the lighted arches of HHM’s conference table, before dismissing the other partners so they can speak alone. Actor Patrick Fabian is…well, after seeing him in this role, where he has to take his natural USA Network blue-sky legal-eagle-drama good looks and imbue them with complexity and depth, you wanna see him sink his teeth into something even juicier. For now, though, he’s completely convincing as a straight-and-narrow, buttoned-up guy who worked for years to protect a man he considered a friend, only for that friend to attack him when he dared suggest a different course of action. “Your first instinct is to sue me?” he asks, the incredulity written all over his face. He winds up buying Chuck out of the firm using funds drawn from his own pocket. The ensuing faux-farewell scene, in which the entire office floods the foyer to wish Chuck goodbye, is like something out of The Young Pope—figures lining balconies, overhead shots of curvilenear staircases, a system working in concert to expel a person who does not belong.

This leaves us with Chuck himself. Between his humiliation at HHM and his severing of ties with Jimmy, he suffers a psychological blow that not even his hard-fought recovery from psychosomatic illness can surmount. At first I was kind of bummed out by what ensued: prestige TV’s umpteenth homage to The Conversation, as Chuck’s mental dissolution is metaphorically depicted by his dismantling and destruction of his house in search of a stray electrical current he can’t seem to shut off at the source. But between Michael McKean’s go-for-broke performance and Dave Porter’s evocative, trumpet-based score, something happens that transcends the sequence’s origin. Before too long it’s clear that something deeper than metaphor is at work. Chuck is losing his mind, permanently. As in, it’s lost. He’ll never find it again.

The episode ends with an image that’s all but nauseating in its unfiltered depiction of this loss. With his house a debris-strewn ruin, Chuck sits at his desk, eyes vacant, his legs repeatedly—almost automatically—kicking. The only satisfaction remaining to him is that of destruction, a feeling his brother Jimmy knows only too well. He just kicks and kicks and kicks at his desk until, finally, his lantern falls off, and explodes, and starts a fire we witness silently from across the street. Chuck has no friends, no family, no sanity. But death is always there for you, waiting. Like the brother you wish you had. 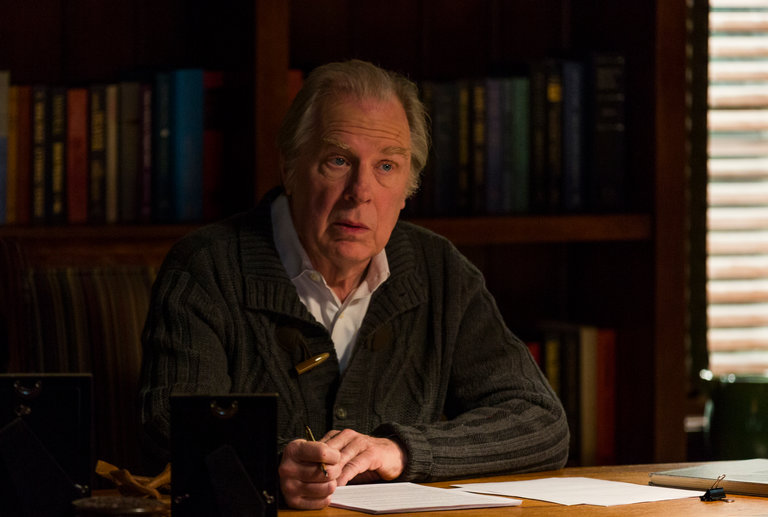