I lived in New Orleans once. It was a slacker’s paradise. Every house, the timbers having surrendered to moisture and termites, slanted into the sea. Every conversation was dotted with stories about the thousand roads taken, and no mistakes had been made as long as the result had been a beautiful twisted tale or a memory full of sepia and sparks. No one spoke of who they could have been, because you lived in a town where failure was the clay of art and character.

And late at night, very, very late at night, on shoebox stages in strangely shaped bars, the cities’ musicians would congregate, usually without a plan. At 3:08 or 3:18 or 3:48, you would see people from the big local rock bands—Alex McMurray, Paul Sanchez, Peter Holsapple, Susan Cowsill—on stage just fucking around with huge grins on their faces, playing New Orleans/Memphis/Bayou flavored rock n’ roll. They played all night, they played loose and wrong and right; they played that old school rattling rock, informed by that Cosimo Matassa/Earl Palmer parade beat, that rolling snare that sounded like the rat-a-tat-tat of a dozen drunken soldiers, one foot in Congo Square, one foot in Jackson’s battlegrounds in Metairie, and damn, some Santeria spirit, unsteady but strong and full of weed and rum, looking over their shoulder, too. Shit, there was even a little London ’77 stirred into the gumbo.

And it was all played with a jazz frame of mind, which is not to say that anyone was soloing or modulating or any of the crap—just that the chords were a platform for a dream, a starting point for an opium-haze dislocation of time and space. The words and the melodies could drift in and out but as long as you held on to that A to Em to D thing and as long as the Jax was cold, they could play all night.

And the musicians on those dim-lit stages (or the space in the corner by the window that they were calling a stage) were making a connection with each other, making a connection with every joyous moment in their rock n’ soul memories. They really could not care less about the audience. What mattered was the bond they were making with each other and the fever dream of history and imagination, forged in bedrooms warmed by heat of old tube-driven stereos; forged by the sibilant hiss of car radios; forged by staring at the chalk outlines around the bodies of old bluesmen and hiccupping, yodeling country singers; forged by the memory, that memory, that one slim slanted slat of a memory, of your parents dancing in your kitchen to Dick Haynes in some imaginary ballroom.

And on a good night, and even on a bad night, when most of the city slept but here near Rampart the old wet walls were shaking, all of these spirits danced through the room.

Throughout a 90 minute set in the gorgeous old Capitol Theatre in Port Chester, N.Y., he makes no verbal acknowledgement of the audience whatsoever (and only a very, very occasional glance in their direction); but among his own band, he laughs, grins, shares in-jokes, makes verbal and visual cues, and in general seems to be having a whale of a time. Virtually every moment underlines that what Dylan is doing on stage is something he is doing almost entirely for himself and the gentlemen on stage with him.

The “classic” material scattered sparsely throughout the set (“Highway 61,” “Desolation Row,” “Blowing in the Wind,” “To Ramona” and “Ballad of a Thin Man”) is re-envisioned almost to the point of non-recognition. This keeps you on your toes, and any good psychologist can tell you that the first step to pleasure is staying alert. The chord changes for these Rushmore-familiar songs are used as platforms for rich and warm evocations of the old simmering, shuddering, sizzling rock n’ roll and lonesome country songs that inspired and still inspire Dylan. Although melodies (and most significantly the rhythmic scan of the lyrics) differ consistently (and usually enormously) from their familiar and famous shapes, I don’t think Dylan is disregarding his legacy. Rather, he is midwifing its reversion to its original form.

Here’s what I mean by that: It feels like the man and the band on stage are composing these songs, working out their frame and their meaning for the first or second time, trying to understand the heart, heat, and memory that led to the creation of these songs in the first place. He is not mocking the majesty and legend of this material as much as he’s trying to show the audience the ultrasound images of the songs in their womb. He seems to be asking, “What does this song mean to me, now?” To stay still would be a lie, and Bob Dylan on stage does not lie.

(Original material of more recent vintage—the stuff off Tempest and Love and Theft—are more “recognizable,” that is, played in a way that at least somewhat resembles their recorded versions).

The center of the set is, without any doubt, the material from the American Songbook that Dylan has recorded exclusively, on five albums, since 2014. On these songs, Dylan, without a guitar, stands in a stance that is half Elvis and half Bing; his legs spread wide, he cradles the microphone and makes gestures to emphasize the songs of love, loss, and wit he is singing. There is not a single drop of irony in these vulnerable, powerful performances.

Dylan’s passion for interpreting the American songbook (and filtering it through the sinewy, tic-tocking sounds of southern and western rock n’ country) is deeply consistent with who he has always been. Despite (or, rather, in addition to) his fame as a songwriter, since his very earliest moments in the public spotlight Dylan has been an interpreter of the American musical experience. Whenever someone claims that there’s anything perverse or contrarian about the work he’s done in in the last few years, I quickly point them to two albums which appear to frame, anticipate, and confirm his most recent artistic ideation: on Dylan’s debut album, released 55 years and four months ago, 11 of the 13 songs are covers; and 1970’s remarkable Self Portrait album—released almost exactly 47 years ago—is a virtual preview of the work he’s done this decade, with it’s mixture of loose, rambling, joyous covers, rollicking roadhouse and Cajun-flavored boogie, simple and moving originals that seek to capture the spirit of a smoke-filled barroom and a southwestern campfire, and even a few weepy ballads from the American songbook.

There’s another way, surprisingly little noted, that Dylan has come full circle: The emotive, prosodic grunt he sings with in 2017 is strangely similar to the voice he used in some of his earliest recorded material—specifically, some of the demos and live takes from 1961 to be found on The Bootleg Series Volumes 1–3. His recent “voice” isn’t necessarily a result of age or deterioration; I believe it’s a choice, and he may, indeed, be trying to say that there is a very real link between the 19 year-old Dylan first discovering his voice and the wizened elder on stage today.

When you watch Dylan on stage (especially when you are so close), you continually find yourself thinking, my god, that’s Bob Dylan, right there. But once you get past that (and it’s goddamn hard to, really) and you try to put this great artist in some perspective, you realize that this slow-moving, shabby/classy swaying, nodding and grinning wild-haired old man in front of you is Dylan, as he always has been: a translator; a boogie woogie rocker with aspirations to be a hobo balladeer; an interpreter of fascinating, joyous and diverse facets of the American musical experience; a folksinger who gets drunk and rambles about the godliness of Louis Prima, Sammy Cahn, and Johnny Mercer; and most of all, someone who refuses to be defined by what you want or what you need him to be.

Bob Dylan recognized, relatively early on in his career, that unless an artist takes an active stance to defend his or her right to evolve, investigate, and make music true to their own heart and memories, an artist becomes a reflection of their audience—not a reflection of themselves. Bob Dylan has never been interested in your idea of Bob Dylan; he is interested in his idea of Bob Dylan.

We want Bob Dylan to shadowbox with himself, or the poster of Bob Dylan, tattered and scarred with scotch tape, that we had on our walls in High School. But Bob Dylan wants to shadowbox with Jimmie Rodgers and Yves Montand and Buddy Holly, and Dick Haynes and Frank Sinatra, and Doug Sahm and Bob Willis and Richard Farina; he wants to play his own jukebox, the one in his mind and his heart, and he is not particularly interested in playing ours.

76 years ago, on the day Bob Dylan was born, the British sunk the German battleship Bismarck in one of history’s legendary naval battles. On that day in 1941, there was someone alive who was alive exactly 76 years before that (imagine Bob Dylan’s 76 years as being the spread between your thumb and forefinger, and now measure that twice): and on that day in 1865, 100,000 Union Troops marched through the streets of Washington D.C., celebrating the victory of the U.S.A. over the C.S.A. in a monumental event called The Grand Review of the Armies. And on that day in 1865, there were men and women alive who were alive exactly 76 years before that (your fingers measure three spans of Bob Dylan’s life, one of which is ongoing!), when, in the first year of George Washington’s presidency, the United States Supreme Court was created.

History is shorter than the width of an eyelash, and every legend is a breath away. Nothing stands still, and I would not expect any true artist to stand still—certainly not just for us.

The sky is no longer the brilliant, -pale hue of the southwestern spring. It has turned the color of late autumn: quiet, shaded, and silver. But it doesn’t matter. All that matters is an uneven wooden stage lit by dim, crayon-yellow lights and strung with Christmas bulbs year round, where some men and women who know the addresses of some deep blue bars on Airline Highway play American music.

Bob Dylan, American, carries that stage with him wherever he goes. 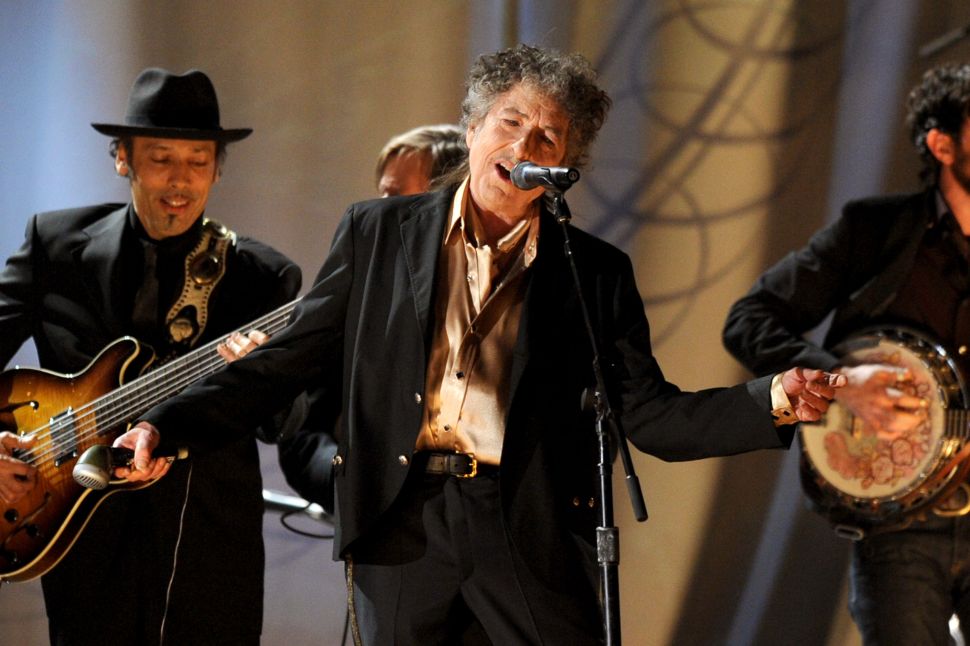