Last week, the Broadway producers of 1984 implemented an age restriction barring children under 13 from seeing the play, reports Broadway World. Now, we know why. At the Broadway debut of the stage adaption of George Orwell’s 1984, an audience member fainted from the play’s graphic depictions of torture, according to The Washington Post.

Recent incidents follow several similar situations which occurred in the play’s London run, during which audience members fainted, vomited and yelled at the actors on stage to stop, according to The Post. And after one evening’s performance, police were called to break up a fight. The Broadway production has posted security guards around the theater.

The classic Orwell novel, first published in 1949, is set in a dystopian future where a totalitarian government has complete control over the information people receive and the reality that information creates. While the novel is a staple in many English class curricula, it has resurfaced on best-seller lists in the months since President Donald Trump took office, causing publishers to print tens of thousands of additional copies, according to The New York Times.

The Broadway stage adaptation, co-written and co-directed by Robert Icke and Duncan Macmillan, doesn’t gloss over the book’s gruesome torture scenes. In fact, the strobe lights and piercing jackhammer sounds heighten tension in the scene. The stage effects have prompted several theater critics to caution against seeing the production without being properly prepared. “Though I usually don’t provide trigger warnings in my reviews, I feel obliged to do so here,” wrote The New York Times theater critic Ben Brantley in his review of the show, adding that “The interrogations that Winston undergoes in the play’s second half are graphic enough to verge on torture porn.”

Meanwhile Variety theater critic Marilyn Stasio described the play as “tough to take—but worth the cost of losing your lunch,”and The Hollywood Reporter theater critic David Rooney has said the production “reaches heights of punishing intensity that will rattle even the most jaded audiences.”

Despite the recent discourse over the show’s graphic scenes, Icke and Macmillan said they have no plans to tone down or change any aspect of their production. “We’re not trying to be willfully assaultive or exploitatively shock people,” Macmillan said, according to Jezebel, “but there’s nothing here or in the disturbing novel that isn’t happening right now, somewhere around the world: people are being detained without trial, tortured and executed.”

Audience members have taken to social media with reactions.

Apparently audience members keep fainting at this play. I did not faint but I can see why someone might. #1984broadway #shook #bigbrotheriswatching

Today's #Playbill: #1984 at the Hudson Theater. And on George Orwell's birthday! This is the first show I've seen with such strict rules about seating. If you're late, you're not getting seated. No reseating either. This show was, in a word, intense! I thought some ppl might leave at the end when it was so bloody and horrifying. Totally different from any other theater experience I've had. #RevisedTruth #NewYork #Broadway 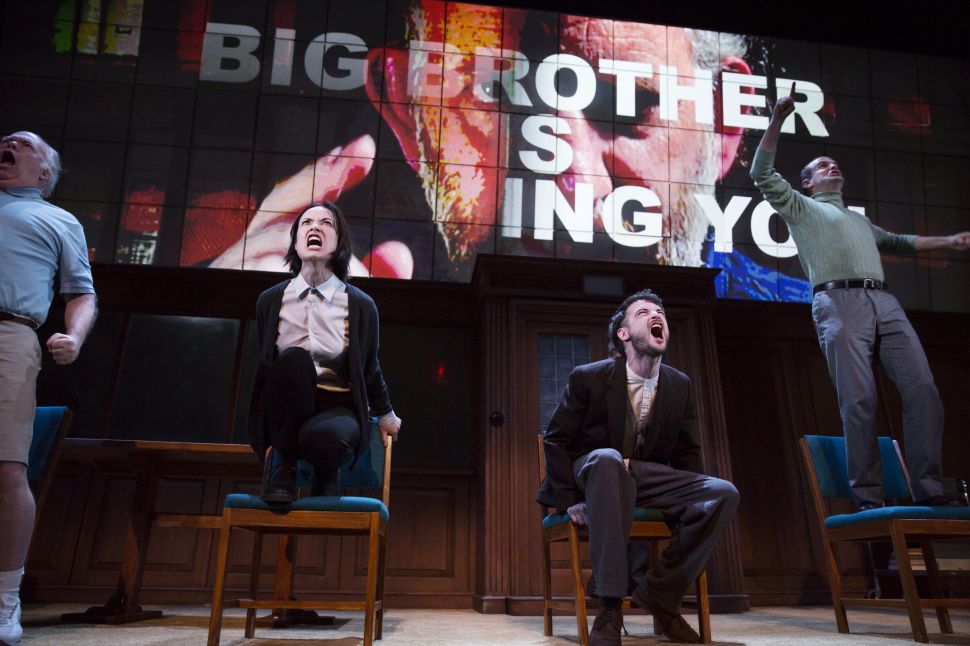