The Trump Organization has hosted an annual charity golf tournament at Trump National Westchester to benefit the St. Jude Children’s Research Hospital in Memphis for the past 10 years and has steered more than $11 million to the hospital. In addition he has raised $5 million via events with other groups, according to Forbes.

Eric Trump said he is able to get the golf course free of charge and have the majority of other expenses donated, but Forbes reported in early June that—after looking over filings from the Eric Trump Foundation and other charities—that there were $1.2 million in expenses with no listed recipients beyond the Trump Organization.

In the letter dated June 23 to Silver, Velázquez—the Bronx Community Board 10 treasurer who is running for the seat currently held by Bronx Councilman James Vacca—requests that he direct the appropriate personnel to look into the situation and assess all contracts and documentation related to the Trump Links at Ferry Point as well as its finances and operations.

Trump Links will be hosting the Professional Golf Association Hope-a-Thon next Monday. The course has also hosted and organized a number of charity events in recent years, including Hank’s Yanks, A Forum for LIFE, Inc. and Unique People Services.

“It’s disturbing to think the Trump Organization would try to make money off a charity for children with cancer,” Velázquez said in a statement. “We know that Trump Links at Ferry Point also holds charity events, but we can’t be certain this public land and the charities that use it aren’t also a target of the Trump Organization’s alleged profiteering. That’s why the city should conduct a thorough investigation of any public records to ensure that Trump Links isn’t a part of the latest Trump family scheme.”

In the letter, she suggests that the controversy surrounding the annual golf charity event for the St. Jude’s Children’s Hospital and Donald Trump’s business conflicts are proof that investigating the Bronx golf course is necessary.

“This practice stands in stark contrast to the values of this city and the character of our parks and public courses,” she says in the letter. “Given these disturbing allegations, as well as the myriad accusations of corruption currently faced by the Trump administration, it is critical that we ensure Trump Links at Ferry Point and the many charity events regularly hosted there are not tainted.”

A Parks spokeswoman told the Observer that the agency received the letter this week and is reviewing the request.

In November 2016, the Trump Organization presented a proposal to Community Board 10—Velázquez’s community board—to expand the 17th and 18th holes of the 18-hole public course onto an adjacent city-owned lot and establish a new wildlife sanctuary for limited public use. Velázquez noted that recently residents have also criticized the course due to its “prohibitively high greens fees compared with other city parks.”

“We all knew that corruption was par for the course with the Trump family,” Velázquez said. “But, allegedly stealing from children is a whole other level that we as a community should not tolerate.”

The location of the golf course—developed by golf legend Jack Nicklaus—was plagued by construction delays, according to Commercial Observer, with then-Mayor Michael Bloomberg subsequently turning it over to the Trump Organization. Bloomberg Businessweek reported that the development of the course—which opened in April 2015—cost about $269 million.

After then-candidate Donald Trump made disparaging remarks about Mexican immigrants in the early stages of his presidential campaign, the course was met with controversy given Ferry Point’s foreign-born and Hispanic populations.

In July 2016, Trump—then Republican nominee for president—told the New York Post that de Blasio was a “maniac” who had not bothered to call or write to thank and congratulate him for building the course. De Blasio told reporters at the time that he did not think the course “was such a good idea to begin with.”

This story has been updated to include a comment from the Parks Department. 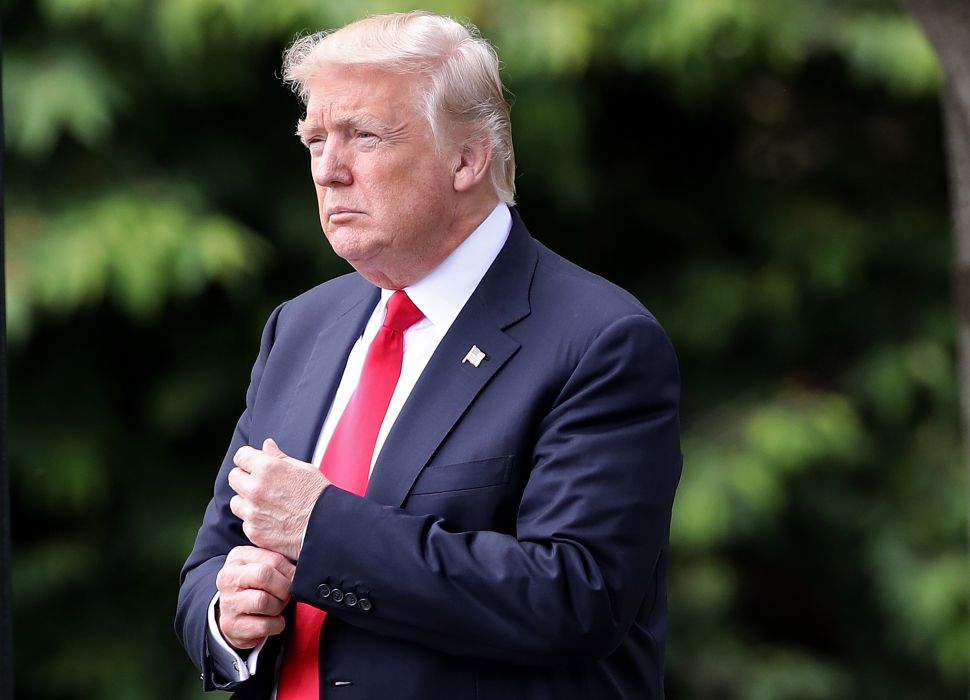