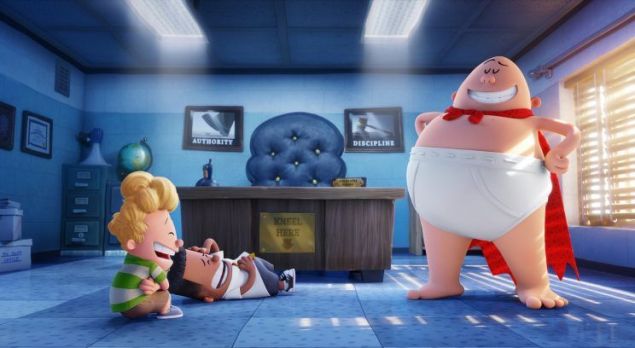 Sometimes a movie doesn’t have a title, it has a litmus test. Such is the case with Captain Underpants. Do you start to titter at the mere mention of the word ‘underpants’? How about the name of the film’s secondary villain, Professor Pippy Pee-Pee Diarrheastein Poopypants, Esq.? As you read those words, do you start to jump up and down in your chair like you just mainlined some Lucky Charms marshmallows? Do you have any thoughts on the seventh planet, the gas giant Uranus? And where do you stand on the subject of man-eating toilets?

If any of these concepts have you screaming affirmations like Meg Ryan contemplating a turkey sandwich at Katz’s, well, then you are likely still in elementary school, or at least your brain has not evolved past the stage of development where your preferred beverage is a Capri Sun Pacific Cooler. Or perhaps you just appreciate a good night of fun at the movies, which this candy colored and purehearted collection of potty humor serves up with enough postmodern glee and subversion that it is likely to entertain those of us who don’t drink sugar water out of Mylar pouches.

For many parents, a film adaptation culled from Dav Pilkey’s twelve book series (not including the 7 spinoffs), even a good one like this, comes as something of a mixed blessing. Since the first book was published 20 years ago, Pilkey’s series has had an almost magical ability of getting children who were otherwise disinterested in reading— especially Nintendo saturated boys— indoctrinated into the world of books. Pilkey pulled off this trick by telling stories that bypassed the gatekeepers and spoke directly to their intended audience, addressing their fears and anxieties— Jerome Horwitz Elementary School is less of an educational institution than it is a decidedly hopeless prison camp— and most profoundly, indulging their sense of humor.

Fortunately director David Soren (Turbo) and writer Nicholas Stoller (the Forgetting Sarah Marshall director and Harvard alum has graduated from the Apatow factory to become a reliably frenetic provider of laughs for kids with The Muppets and Storks) take Pilkey’s lesson to heart. Parents are nonexistent in the film, teachers are mindless drones pushing rote memorization, and the other adults are generally evil, kid-hating buffoons. Chief among these is the egg-shaped screamer Principal Krupp (Ed Helms), whose proudest accomplishment as an administrator was eliminating the arts program to pay for his steel-reinforced remote control office door. Krupp is hell-bent on forever destroying the magical partnership between fourth graders George Beard and Harold Hutchins (Kevin Hart and Silicon Valley‘s Thomas Middleditch respectively), who in addition to running a budding comic book company out of their treehouse, are such accomplished pranksters that they have their own engraved chairs outside of Krupp’s office. To foil his plot, George and Harold use a cereal box toy to hypnotize Krupp. (Remember those? They’ve mostly been replaced by access codes to online video games.) With a snap of their fingers, they transform their nemesis into their most successful comic book character to date, the cape donning, tighty-whitey wearing dimwitted hero of the title.

Hart and Middleditch are an inspired comic pairing; George and Harold’s friendship will simultaneously call to mind your best friend from middle school and an especially good SNL sketch writing team. Their fear of being separated, demonstrated by a clever mall-set nightmare sequence featuring sock puppets, provides the backbone for the film’s silliness and joyful nonsense. In its second half, which is dominated by the aforementioned super criminal Poopypants (voiced by Nick Kroll doing a riff on Einstein) Captain Underpants loses a bit of its uniqueness, becoming the kind of sight gag and chase happy product one has come to expect from the DreamWorks Animation factory.

While the movie is solidly and unapologetically pitched towards kids— it largely eschews the AM radio gold DreamWorks tends to lard on these pictures to keep parents awake— it has a subversive streak that is as genuine and sharp as anything whipped up by Roald Dahl. The film’s primary target is the chronically underfunded public school system, where a lack of resources has forced the curriculum to demand compliance over creativity. When Poopypants uses his shrink ray on the school, it is filled with “tiny students and tiny teachers whose tiny paychecks reflect the value society puts on education.” Our public school system may be screwed, the film seems to say, but the kids— even the ones who insist on cracking fart jokes at the dinner table— those kids are alright. 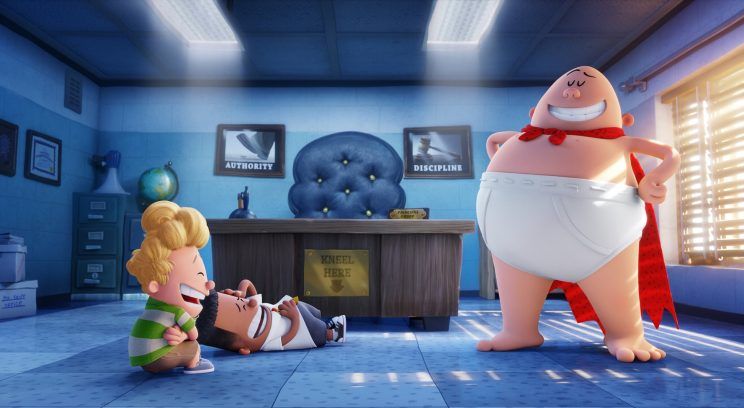