There are plenty of ways to celebrate Father’s Day and show dad how much you care. And this year, aside from all the presents and time spent with dad, an Instagram post is pretty much a prerequisite for the special day.

Celebs took to the app to show their appreciation, uploading posts of the day’s honoree.

Behati Prinsloo shared a sweet black and white photo with Adam Levine and their daughter, Dusty Rose, for her husband’s first Father’s Day. Cindy Crawford’s model daughter Kaia shared a snap with her dad Rande Gerber, while both Nicole Richie and her little sister Sofia posted photos with Lionel Richie.

Kris Jenner posted a collage with photos of Kanye West, Rob Kardashian, Scott Disick and a snap of her three oldest daughters with their late father, Robert, and did not include Caitlyn Jenner. Kourtney Kardashian also shared a throwback snap with her father. Kim Kardashian shared a similar post, and also one of Kanye with their son, Saint, aboard a private jet.

Gisele Bundchen posted a sweet photo of Tom Brady playing in the grass with his three kids, and Michelle Obama shared a throwback photo of Barack Obama with their two daughters. Across the pond, Kensington Palace posted a collage of Prince Charles, Prince Harry and Prince William, with a photo of the Duke of Cambridge with Prince George, as well…we’re wondering where Princess Charlotte is, though.

Bella and Gigi Hadid spent the day with their father, Mohamed, and their three other siblings, and Gal Gadot showed off the custom cupcakes she got for her husband. Lena Dunham posted a heartfelt post for her dad, showing him sitting with her and checking in on her as she was in the hospital for endometriosis.

Below, see some of the sweetest posts celebs shared in honor of Father’s Day.

Happy first Father's Day, you are EVERYTHING to us. I'm so proud of the kind of dad and husband you are. I can't do life without you!!! Luckiest girls alive 👨‍👩‍👧

There is nothing better than being with you. We miss you and love you so much! Happy Father's day!! ❤️❤️❤️Não há nada melhor do que estarmos com você. Estamos com saudades e te amamos muitos! #felizdiadospais

‪Happy #FathersDay @BarackObama. Our daughters may be older and taller now, but they’ll always be your little girls. We love you.‬

To all the fathers out there who love unconditionally, who put their children first above all, we love you!! To my son, Rob, on your first Father's Day… I am so so proud of you!! I've watched you grow into the most loving, caring father to our precious angel, Dream. Your father would be so proud of you. I love you and I'm proud of you Kanye and Scott. You amaze me every single day and all of my grandchildren are so very blessed to have all of you as fathers. To all the amazing dads out there, Happy Father's Day!!! #FathersDay

Blessed to call him my daddy. I couldn't have dreamed for any better. Happy Father's Day. 💘

Happy Father's Day Baba ❤️ The one and only @mohamedhadid Happy perfect Sunday with my darling handsome smart funny Faaajjaaa 🦋🦋🦋you know how much I love you ! Seeing you smile makes me smile 🌸 I'm so thankful to share you with my 4 beautiful siblings @gigihadid @anwarhadid @lanzybear @mariellemama Thank you for the stories, jokes(mostly all funny), all that you do for our family, and for the unconditional love, always…❤️❤️❤️

HAPPY FATHERS DAY to the best one I could ever ask for !!!! Thanks for all the love and laughter you have brought to my life and for my three one-of-a-kind sisters & the best brother evaaa WE LOVE YOU FOREVER ❣️ @mohamedhadid // @mariellemama @lanzybear @bellahadid @anwarhadid

Happy Father's Day to big pimpin! Couldn't imagine this crazy life without you. Thank you for being the best dad you know to be 🐐🐐@lionelrichie

#HappyFathersDay L-Train. 🚂🚂 You lift me up & keep me smiling. I am lucky to have you. Not everyone gets to celebrate today. To the 4 year old daughter of #PhilandoCastile & every child who's father has been taken from them: I see you, & my heart is linked with yours today and EVERYDAY because #weareone

Happy Father's Day. Wishing all the fathers out there a very happy day.

To my other half , father of my children and love of my life @jaronvarsano . You are simply the best dad EVER! I couldn't ask for a better person to be the role model for my babies. You are our anchor, our hero and our heart ❤️ love you to the moon and back. Happy Father's Day to all amazing dads out there. And to my own loving , protecting and amazing dad Micheal . Celebrate all the great fathers and men in your life 💃🏻🎉🙏🏻💪🏻🙌🏼❤🍀

This may look like a blurry shitty iPhone pic but here's what it actually is: an image of my father on his zillionth ER trip of the year with me last month, checking to make sure no one came into the room who didn't need to. This man has been with me day and night: as I slept after surgery, as I was wheeled into an MRI, as I lay abject and feeling sorry for myself. He made friends with every nurse. When I got home he blended banana shakes when I wouldn't eat, woke me up with my meds at 3am and made me laugh every day. He gave up his own busy life to make sure I could return to mine. I'm healthy and safe because of his unyielding love. On this Father's Day I want to celebrate all the men who defy the signals culture sends them and nurture, nurture, nurture. I love you Papa. You're my best friend.

Can't forget the first important father in my life. The man who never stopped working to make sure we had the best life possible. I was so proud to hold your arm on this day and so proud to call you my dad every day. Love, your boogernose goober 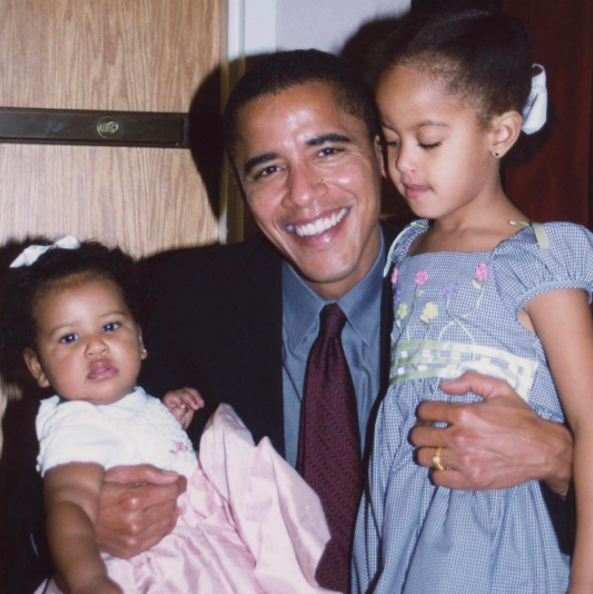