He told reporters he really admired all the candidates running for governor on both sides of the aisle, “because I think it takes a lot to get yourself out there, to raise the money, to go to the events, to do the things, to go through the policy preparation, and all the rest of that that all these candidates have done.”

That was “something positive” he had to say about the race, Christie told reporters, noting that they often prime him with questions that push him into attack mode against this person or that.

Little did Christie know he would soon be getting one of those questions. And he seemed to relish taking the bait, going on a 10-minute tirade against the Democratic front-runner in the governor’s race, Phil Murphy, calling him a “fraud” with no experience who “bought the nomination” and was just another Jon Corzine, except “he doesn’t have a beard.”

He accused Murphy of making a phony promise to restrict his spending in the general election.

“You don’t really buy that, right? He’s a fraud,” Christie said. (Last week, the governor called Murphy “a Goldman Sachs shyster” during an interview with NJTV.)

Murphy’s campaign in many ways has been a long, daily excoriation of Christie’s two terms. He has plans for a sea change in Trenton that would reverse several of Christie’s biggest moves and usher in sweeping changes Christie has blocked, such as a taxing millionaires, toughening gun control laws, legalizing marijuana and many other items.

“All the while we’re fighting to undo the damage that Governor Christie has done, we’re going to have to deal with a hostile administration down in Washington,” Murphy said at a campaign rally on Sunday with former Vice President Joe Biden (who apparently was flying around the globe trying to recruit candidates to knock out Christie in the 2013 race).

After the Election Law Enforcement Commission disclosed on Wednesday that Murphy had spent $20.1 million on the primary, the candidate announced he would participate in the state’s public financing program for the general election if he became the Democratic nominee. That would limit Murphy’s spending in the general to $13.8 million. 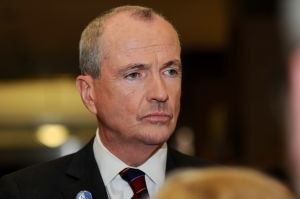 “This is a joke,” Christie said. “If his lead continues to be double digits, he’ll stick with the public financing. The minute it falls under double digits, if that were to happen, you watch the third-party group that’s going to come in. ‘New Jerseyans for a Better Way,’ you know, will come in. And all of a sudden they’ll have $10 million in attack ads kicking the — bejesus out of whoever the Republican nominee is. And Phil Murphy will say, ‘Oh, I don’t know about that outside group. I have absolutely no idea. Tammy, did the check clear?’ I mean, seriously, come on.

(Tammy Murphy is the candidate’s wife.)

Christie threw in that Murphy, a former Goldman Sachs executive, had no real experience and that he wouldn’t be the front-runner if he had faced the $6.4 million spending limit that his lead rivals have faced in the primary. He predicted voters would throw Murphy out in four years if he won, like they did to the last Goldman Sachs governor, Corzine.

While he was at it, Christie also accused Murphy of buying the ambassadorship by raising a lot of money for President Barack Obama and Democrats.

“You want to go through the list of people who’ve been ambassador? How did he get the ambassadorship? He bought it. He bought it. That’s who gets to be ambassadors. Seriously. And that’s in Republican or Democratic administrations. The people who get to be ambassadors are the best fundraisers, except for those very special situations like China and Russia, who, you know, you get people most of the time who have some expertise.”

A reporter noted that it didn’t sound like Christie really admired Murphy, as he had said about all the candidates minutes earlier (except for Bill Brennan, a Democrat whom Christie called a “knucklehead” and a “jerk.”)

“It’s that I don’t agree with him. On a personal level, I think he’s a perfectly nice guy. He’s a perfectly pleasant guy to have a drink with or dinner. He’s a nice guy. He’s done a lot of good things with his life. But, as he’s displayed over time, I don’t think we agree on a whole heck of a lot. And I hate when politicians make meaningless gestures like that. ‘I’ve already spent $21 million but now I’m willing to be restricted in how much I spend.’ The horse is out of the barn already. If you were going to be restricted, you should have restricted yourself in the primary.”

“The last person who should be giving anyone advice on ethics in government is Chris Christie, who is apparently too toxic even for Donald Trump to touch,” Roginsky said.

Christie said he will be voting “up and down the Republican ticket” on Tuesday, but he once again declined to take sides publicly in the GOP primary battle between Assemblyman Jack Ciattarelli and Lt. Gov. Kim Guadagno.

The governor said he will be receding from the spotlight after the primaries and won’t be holding town halls during the campaign season so as not to overshadow the race to replace him. “I’m satiated,” he said.