The City Council, along with roughly 100 Muslim and immigrant advocates and community leaders, gathered in the Council chambers Tuesday night for a “resistance Eid celebration” to honor leaders who have worked on behalf of Muslims and immigrants following the end of the holy month of Ramadan.

On Sunday, Muslims around the world celebrated Eid al-Fitr, which marks the end of the month-long Ramadan fast.

Ibrahim Abdul Matin, director of community affairs at the city’s Department of Environmental Protection served as emcee for the event and said that there were a lot of people in the room “who are firm supporters of truth.”

“What I would like you to do is just acknowledge and know that if you look around the room, the people that are in this room are dedicated and committed to the values of fairness and equity and justice and resistance,” Matin said. “We have to come together and make sure we’re united in a united front.”

Indeed, he proclaimed that the event was an opportunity for people to get together and resist any attacks against the Muslim community.

“This is our resistance Eid celebration, ladies and gentlemen,” Matin continued, garnering applause from the crowd.

The celebration came two days after the Supreme Court decided to allow Trump’s ban to be implemented for any “foreign nationals who lack any bona fide relationship with a person or entity in the United States,” with oral arguments to be heard in the fall—a development that President Donald Trump labeled a national security victory.

Attendees also honored Nabra Hassanen, a 17-year-old black Muslim girl who was assaulted and beaten to death in Virginia while walking back to her mosque with her friends. The event also comes in the aftermath of a British van driver who drove into a crowd of Muslim worshippers as they were exiting a mosque in north London, resulting in one death and eight injuries.

The honorees included Rana Abdelhamid, founder of Women’s Initiative for Self Empowerment, a nonprofit organization that trains Muslim women to empower themselves and their communities in self-defense, storytelling, social entrepreneurship and organizing, and the Khan Foundation, an organization that supports low-income youth and rising professionals through college and career readiness.

The New York Immigration Coalition, an immigrant advocacy group that has held a number of actions in response to Trump’s travel bans, and the New York chapter of the Council on American-Islamic Relations, were also honorees. CAIR-NY hosted an emergency rally when news broke that Trump was planning to implement, in part, the ban on Muslim immigration he proposed on the campaign trail.

“We wanted to highlight Muslims and their contributions as well as our allies, which has contributed to the advancement of our community and through their deeds have truly uplifted all of us humanity,” Miller said.

Imam Al-Hajj Talib ‘Abdur-Rashid of the Mosque of Islamic Brotherhood in Harlem delivered the invocation during the celebration. In the wake of Trump’s first travel ban, he led a Jummah Prayer—a congregational prayer Muslims hold every Friday—and interfaith action hosted by the New York Immigration Coalition and Majlis Ashura: The Islamic Leadership Council of Greater New York.

“We ask you to inspire us, to lift us up in this day and time as neighbors and to make our hearts on in submission to you,” Abdur-Rashid said, referring to God.

Abdelhamid, a Queens native and the daughter of two Egyptian immigrant parents, said that her organization “has been able to have impacted and trained over 2,000 women across the world.” She said that she “came of age” following the September 11, 2001 attacks when she was about 15 years-old and was assaulted by a man in Queens “who was trying to remove my hijab.”

Her organization hosted a vigil in Union Square to honor Hassanen.

Murad Awawdeh, director of political engagement for the New York Immigration Coalition, was among a group of Muslim and immigrant advocates who proclaimed yesterday that they are “prepared to mobilize” in response to the Supreme Court’s decision to allow part of Trump’s travel ban to go into effect at an emergency press conference.

“Thank you to the New York City Council, thank you to Council member Daneek Miller, Councilwoman Barron…and the speaker, Melissa Mark-Viverito, and all of the New York City Council for standing up with us in a time when we are at a crossroads where either we go left and continue on this pathway of hatred and intolerance…or we continue going straight to the right where we will be able to fight for justice,” Awawdeh said. 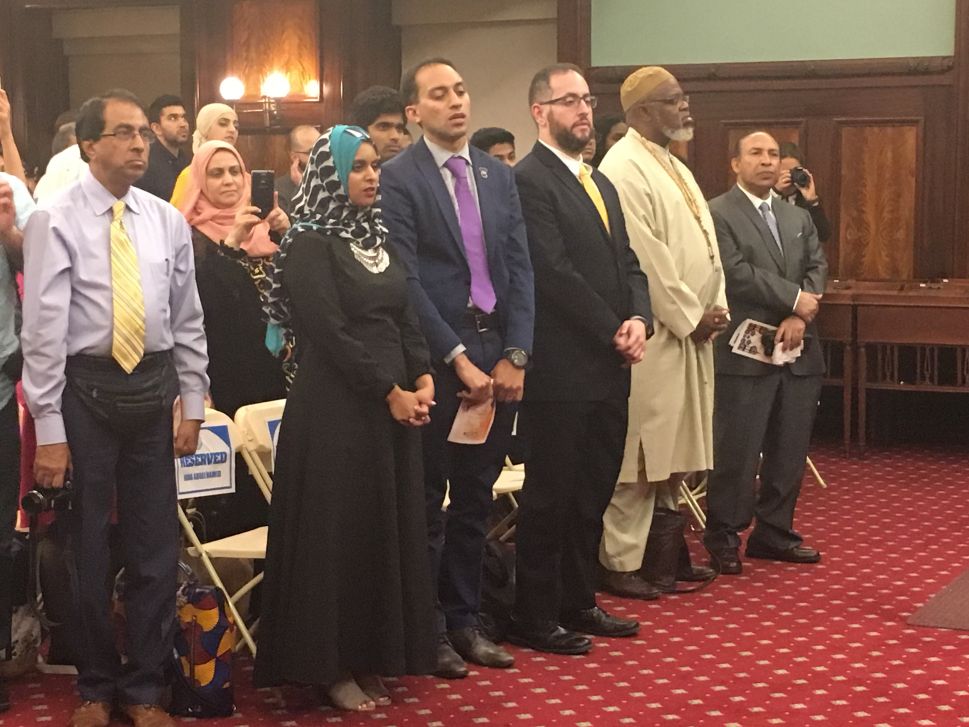