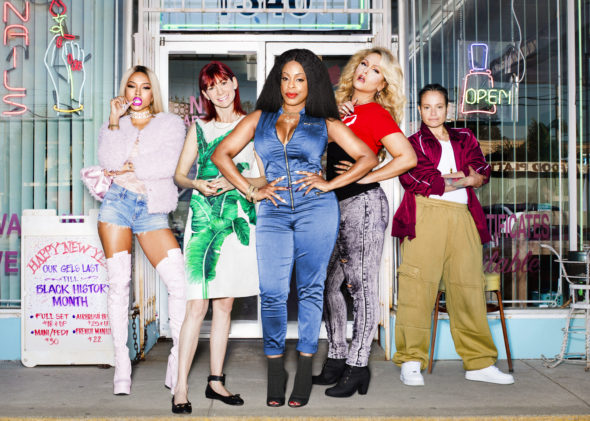 The cast of TNT’s Claws. TNT

Her show features women with stunning looking, carefully manicured nails, but Janine Sherman Barrios admits that her nails are far from being at all glamorous.

“When you’re a writer, it’s really hard to have long nails — because we write hard,” she laughs. “But,” she adds, turning more serious, “our actors did go to nail salon school and we spent a lot of time in salons to learn the slang and everything.”

Sherman Barrios is talking about the work she’s doing on the new dramedy series Claws.

The narrative features a group of women employed at the Nail Artisans of Manatee County, Florida, but as they work to please their clients, they each dream of a better life. Reaching to improve their individual situations, each one struggles with what she has to do to get what she wants. There’s cheating, money laundering, and maybe even murder.

At the helm of the salon, and this group of ladies, is Desna, who dreams of a new salon and improving her situation as she cares for her mentally challenged brother.

“This crew of women wants their piece of the pie,“ explains Sherman Barrios. “A lot of the time when you see women on TV they’re bickering with each other, but these women really have each other’s backs. They’re mini gangsters, doing whatever they can for each other.”

The theme of female empowerment is persistent throughout the series, says Sherman Barrios. “These five are not looking to men for permission. They’re looking to get want they want in spite of the men who try to hold them back.”

Another topic explored throughout the series, reveals Sherman Barrios, is the question of time. “We talk a lot about if it’s too late; has time run out?” She explains further, saying, “When you reach a certain age, can you keep dreaming? That’s something that we all question. If people are trying to write us off, can we still shine? I think the answer is, ‘yes.’ You just don’t stop dreaming at a certain age.”

Throughout the narrative, each of the women gets knocked down repeatedly, but they do have a win now and then. Sherman Barrios says this mirrors life in a realistic way. “We always want to find tension and conflict in our story, but we also want people to get a little ahead. It’s that familiar thing of ‘two steps forward, one step back.’ The best drama has highs and lows and this show does that really well. It gets fiercely dramatic because it’s a snowball that keeps going.”

All of this talk about loyalty, fierceness and getting ahead no matter what it takes might have viewers thinking that the show is strictly a drama, but it is, in fact, very comedic as well.

Explaining how her team finds the right balance between being dark and funny at the same time, Sherman Barrios says, “I think it’s a lot of that Florida noir with crazy things happening right in broad daylight that helps it be both. Elmore Leonard and a bunch of other writers have written this sort of genre and it works. I think whenever you have something dark and you twist it and find a new skew, you find a lightness and humor that’s unexpected. This is surprising and acerbic, but it also gets dark and dramatic. Meshing all of that together just works.”

Some have compared the series to the highly regarded Breaking Bad, to which Sherman Barrios responds, “That’s an amazing compliment. When you look at the arc of Desna, she does, in a lot of ways, mirror [Breaking Bad lead character] Walter White. She’s a woman who’s trying to provide for her family, and she draws outside the lines to get there. I can see why people are comparing her to him. She’s an ordinary person who has to stretch and do extraordinary to take care of herself and those around her like he did.”

Sherman Barrios says that the bold show highlights something that’s missing on air at this moment. “We don’t have an ironic crew of women dominating TV right now,” she points out. “There was Sex and the City and Designing Women in the past. But right now, it’s rare that you see women being this badass.”

Commenting about what viewers will ultimately take away from the series, Sherman Barrios says, “When you see these women you’ll see some of yourself in them. When you turn off the TV you’re going to go, ‘I wish that was my crew,‘ because of the way they have each other’s backs. I think now, more than ever, women need to help and support each other as we climb up the ladder, and that’s what this exemplifies.” 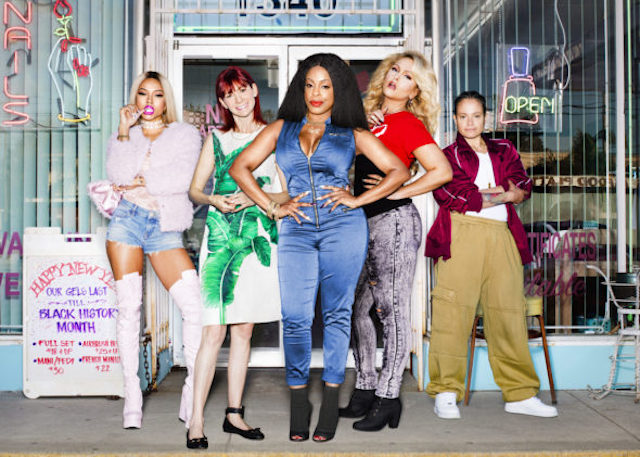