Welcome to our TV Fashion column, where TV Ate My Wardrobe‘s Emma Fraser discusses the trends in television apparel. This week: the chameleon wardrobe of Tatiana Maslany on Orphan Black.

Sarah Manning has been on the run her whole life and she has perfected the art of figuring out an escape route, whether it is sneaking out of her family home in the dead of night during her misspent youth or fleeing from those who want to experiment her in the present day. On Orphan Black there is always more information to be gathered and Sarah is the most resistant of the remaining clones in complying with those at the top. Well, Sarah and her twin Helena, who also happens to have the art of fleeing and self-preservation down to a fine art.

Mimicry is one of Sarah’s grifter skills and she has shown time and time again that given the right outfit and wig/headband/hat she can double as any of her counterparts. Yes they all share the same face – a bonus when impersonating someone – but there is much more to it than that. Part of this is also down to the genius of Tatiana Maslany and after five seasons watching this show I still forget that she is playing every single clone. Also after all this time you think I would be used to the actual size of the cast and yet whenever they make a public appearance there is still a split second of wondering where all the other actresses are. She is that good.

The Emmys finally recognized her last year and while she isn’t eligible to defend her prize (season 5 missed the cut-off point) I do think there should be an award for actor who has played multiple versions of a character on one show. This doesn’t necessarily have to be playing entirely separate characters and one of the joys of watching Tatiana Maslany is when one clone is playing another. Other potential nominees for the 2017 honor would include Kyle MacLachlan, Keri Russell, Matthew Rhys, Rose McIver, Justin Theroux and Ewan McGregor.

But Orphan Black doesn’t rest on its Tatiana Maslany laurels and they are still trying new and adventurous set-ups when it comes to staging the clones on screen together. One such moment occurred in the most recent episode “Clutch of Greed” and involved the act of swapping clothes in an effort to help an escape.

A clone playing another clone is something the show has been doing since before Sarah even knew anything of Leda, Dyad or Neolution. She saw an opportunity after witnessing Beth’s suicide and their shared face; it spiraled from there. Next came pretending to be German clone Katja in an effort to retrieve her briefcase and covering for a very drunk Alison at a neighborhood potluck. Sarah has also doubled for Cosima and Krystal, but the real trickery came in when Sarah played Rachel so she could interrogate Alison who was dressed as Sarah. Keeping up?

Alison has also helped Sarah out with custody issues by dressing as her wayward seestra and Cosima stepped in for Alison wearing a campaign beanie to cover her dreadlocks. Even Helena has got in on the action stuffing her mound of dirty blonde curls into hats in order to play Beth and Alison. As far as I can recall none of the other clones have been Helena; she’s the true unique one. Basically there is a lot of swapping of clothes, switching accents and figuring out what to do with their vastly different hairstyles.

Sometimes the audience is in on the ruse and on other occasions it only becomes clear halfway through the scene when the performance reads as purposefully slightly off; the hair doesn’t quite look right, a cape is slightly askew or the clone is not acting as we have come to expect. In “Clutch of Greed,” Tatiana Maslany is once again given the chance to flex those character within a character muscles and the technical team has more tricks up their Orphan Black sleeves.

First there is what we have come to expect from a double-cross and I can suspend my disbelief that Sarah happens to have a near duplicate of whatever expensive cape Rachel is wearing and the approximation of the rest of Rachel’s outfit looks very Rachel from a distance. Close scrutiny isn’t taking place here and the key pieces to sell this story are the white walking stick, the blunt bob wig and accent that Sarah has done on multiple occasions. She has even fooled Ferdinand in the past when she had access to Rachel’s actual wardrobe. Each clone has such a distinct style and on a superficial level it is easy to identify exactly which clone we are watching.

As is often the case on Orphan Black things don’t quite go according to plan and when Mika/M.K. (the newest clone addition from last season) refuses to leave Felix’s loft, Sarah goes to get her because while running is what she does best, there is also the clone code of looking out for each other. But M.K. is tired of running and insists on staying behind to stall Ferdinand so Sarah can make her escape; time for another clothes switcheroo.

Co-creator John Fawcett (who directed this episode) ups the ‘faking it as another clone’ visual stakes by showing the clothes swapping in one long take, which is a technical feat when one actress is playing both parts. Wigs, capes and hoodies come off and are hastily put back on; this is not so much about making Ferdinand believe that M.K. is really Rachel, but buying enough time so Sarah can flee.

Typically the ambitious clone interacting scenes involve the core clones – Sarah, Alison, Cosima, Helena, but not Rachel – and are often moments of celebration at the beginning or end of a season with dance parties or group feasts. Fawcett told Entertainment Weekly that the scene in question was initially intended as a season 4 finale sequence, but it is far from celebratory. Instead what occurs after Sarah has left M.K. waiting for Ferdinand is quite possibly the most disturbing act of violence depicted on this show. Disturbing for a number of reasons including Ferdinand’s complex relationship with Rachel (who M.K. is dressed as) and the manner in which Ferdinand kills her.

M.K. is a bit of a plot device clone; the sheep mask was a fun nod to Dolly, but really she is here to move the story along and give some hacking help. This doesn’t mean she deserved to go out in the way she did and there’s a lot queasy implications about Ferdinand’s glee in stomping on M.K.’s chest while she’s wearing a Rachel wig. Yes we have seen Ferdinand show violent delights in the past including caving a man’s skull in with a baseball bat and as per M.K.’s slideshow he was the architect behind the operation called Helsinki, which killed several clones and their families. One such person was M.K.’s best friend and this why she tied him to a chair last year and would have set him on fire if Sarah hadn’t stopped her. She also stole his money so vengeance is clearly on his mind. But because M.K. is dressed as Rachel (no matter how sloppily the cape and wig have been applied so both M.K’s scarring and very un-Rachel t-shirt are showing) this scene comes with its own set of baggage that is troubling.

Before leaving M.K., Sarah tells her “We run on principle, it’s all we’ve got left” and despite her instincts to flee the clutches of Rachel and the Neolution organization who want monitor her daughter, in the end it isn’t up to her. Kira has some clone detecting ESP and when she can no longer feel M.K. she correctly assumes she is dead and she’s had enough of Sarah’s schemes. She wants to stay and this leaves only Helena out in the wilderness. Helena was wearing nothing but a hospital gown the last time we saw her; having seen just how resourceful she is over five seasons I think it is safe to say that she will be dressed and back helping her seestras in no time. 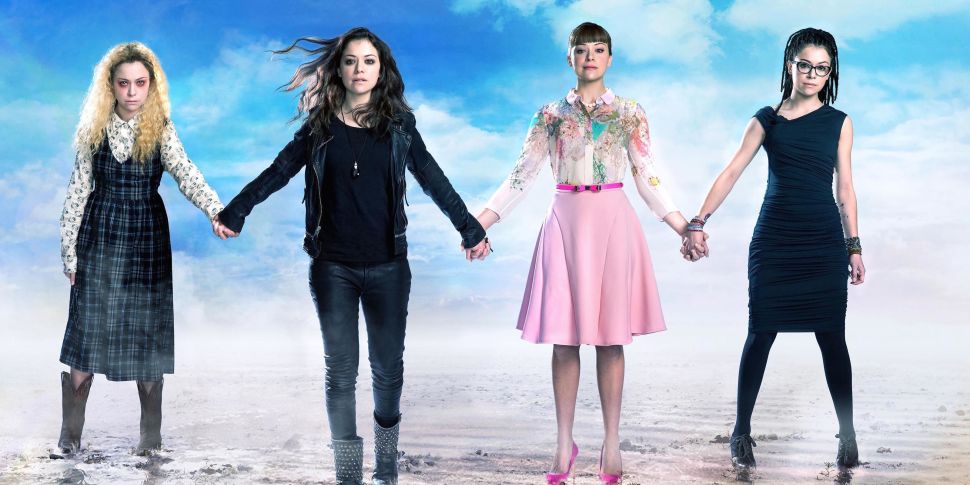