Ananya Vinay survived 36 rounds of competition before spelling “marocain” to be crowned the 2017 Scripps National Spelling Bee champion. The victory quickly thrust the Fresno, California-born middle schooler into the media spotlight for appearances on Good Morning America, Today and Live with Kelly and Ryan, but the fun came crashing down when she went on CNN.

Morning anchors Alisyn Camerota and Chris Cuomo spent as much time berating the 12-year-old Indian-American with racist comments as they did congratulating her. The duo first had her spell Trump’s infamous “covfefe” before making assumptions about her native language.

In a video of the segment, you can see Vinay feeling awkward as she attempts to spell “covfefe” at the request of Camerota and Cuomo, who are obviously very amused by this.

“Part of speech?”, she asks, to which Cuomo replied, “It could be a noun but may be used as a verb and insult.”

She also asked for the definition, origin and alternative pronunciations.

“Stop stalling! Do you know how to spell this word?”, Cuomo pressed.

Vinay didn’t properly spell “covfefe,” and then things took a turn for the worst. As if having a 12-year-old minority play along with a Trump joke for a fun laugh isn’t bad enough, Camerota found a way to make the interview truly racist.

“It was really covfefe, but again is a nonsense word, so we’re not sure its root is in Sanskrit, which is what you’re probably used to using,” she said.

Never mind that Vinay was actually born in California and is plenty used to English, this type of assumption is dangerous and based in racism. Because of the color of her skin, this child was automatically cast as an outsider. And considering she just won the National Spelling Bee in English, the irony that Camerota thought she is only used to Sanskirt—a now-“dead” language formerly spoken in Southeast Asia—is mind-blowing

A video of the clip has been going viral on Facebook, and the reactions are intense:

“Wow! That’s just painful to watch. Shame on CNN for being overtly racist.”

“So they see a girl with brown skin and immediately place her in the category of ‘other,’ non-american. She can’t possibly be used to speaking English (growing up in Fresno, CA)- she must be more used to Sanskrit. #microagressions.”

“Yeah, I expected that from FOX but I didn’t expect the racism out of CNN. That lady should be ashamed.”

“It’s ironic how she, the daughter of immigrants, won the bee by spelling words that few of us have ever heard of while the POTUS routinely misspells even short, commonly used words while the country debates what he meant by, “Covfefe,” a non-word that is actually now in my FB spell checker. Somehow, this all seems to epitomize exactly how F’d up America is right now.” 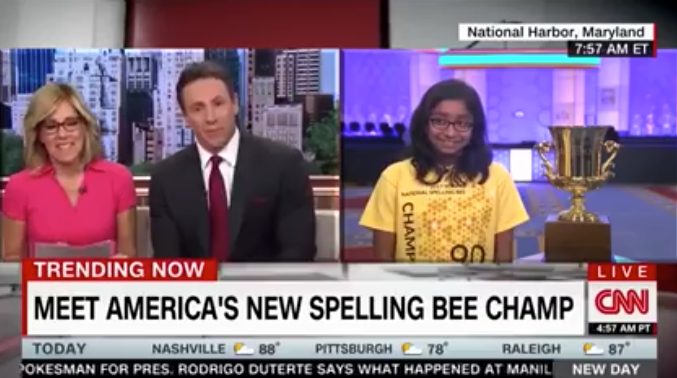