Since Sen. Cory Booker was one of 13 Democratic senators to sabotage Sen. Bernie Sanders’ amendment to import cheaper prescription drugs in January, speculation that Booker will be a contender for the 2020 Democratic presidential nomination has been met with condemnation. In 2014, The Washington Post reported he had 74 wealthy donors in common with Senate Majority Leader Mitch McConnell, the most overlap between opposing party senators of individual campaign contributors. Booker has also served on an education board with Secretary of Education Betsy Devos and owes his position in the Senate in part to New Jersey Republican Gov. Chris Christie for deciding to hold a special election rather than appoint his replacement to fill New Jersey’s vacant Senate seat after Sen. Frank Lautenberg passed away in office.

On June 8, Diane Moxley of Real Progressives and Jeff Epstein of Citizens’ Media TV released an audio recording of a meeting Booker had with New Jersey activists earlier this year. “How would you feel if I gave back all of the pharmaceutical money that I have in this cycle? Would you feel better?” Booker said to the activists, who responded that they would support this move. Booker has yet to fulfill his offer. Moxley wrote in an article for Real Progressives releasing the audio, “Since another of those present at the meeting has been trying to follow up with Sen. Booker’s office regarding his promises to return the big pharma money and received no response, we decided it was appropriate to release these recordings to the public so that people can have a chance to hear for themselves.”

Booker then went on to attack Sanders throughout the meeting, reducing the amendment bill. He said, “Bernie’s amendment may have had three, four, five sentences. That is not legislation. Bernie’s amendment, he put on there as a messaging bill. So just please don’t make more out of what he did that he’s doing. So we saw Bernie’s legislation, which was wholly incomplete. They’re still working on it.”

He added, “On my bill, and I think Bernie took my idea,” in reference to Booker trying work on a different prescription drug reform bill with Sanders and several other senators. In late February 2017, Booker joined Sanders in introducing a drug re-importation bill, and it is still pending.

Booker also attacked Sanders for voting against a prescription drug bill years ago: “There was a piece of Lautenberg legislation that would have allowed drug imports that Bernie voted against about five or six years ago because he said the safety precautions were too much.”

Booker left out important context about drug safety standards regarding the importation of prescription drugs. In 2007, Reuters reported, “In a setback for supporters of legalizing the import of cheaper drugs into the United States, the Senate voted 49-40 on Monday for an amendment to require safety certification of drugs from abroad.” That setback is because safety certification of drugs from abroad have never been certified by Democrat or Republican health secretaries. “The drug industry and opponents of importation have said buyers of legal imports could not be sure whether they were getting a safe and effective drug.” Booker and several Senate Democrats took the same stance Republicans and George W. Bush took—in line with the pharmaceutical industry—on Sanders’ prescription drug amendment.

After bringing up Sanders’ past vote, Booker says, “But nobody protests Bernie at his own rally,” and another woman in the room agrees with him that nobody crosses Sanders. 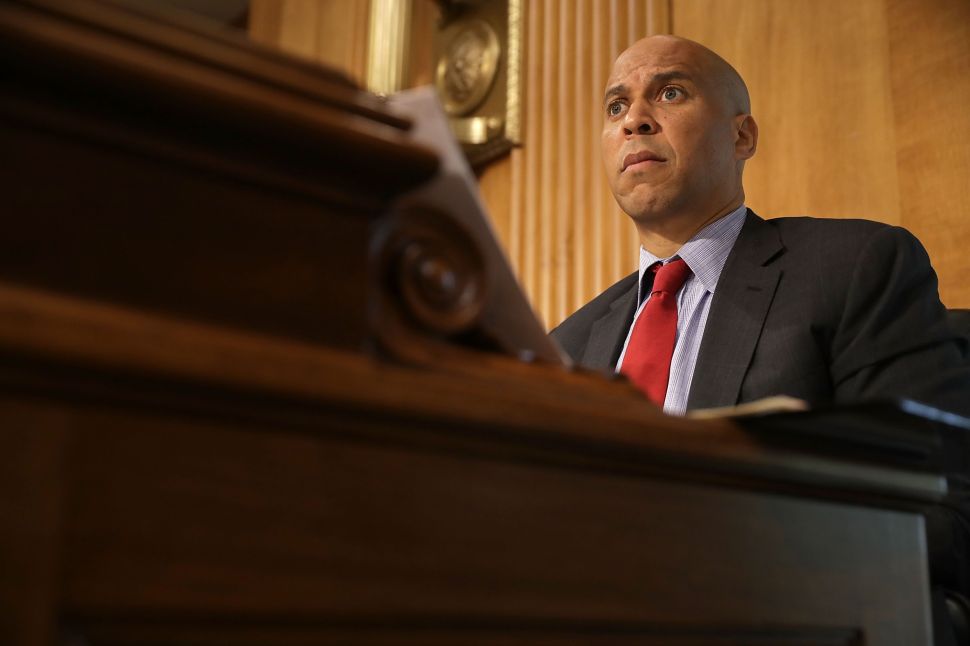