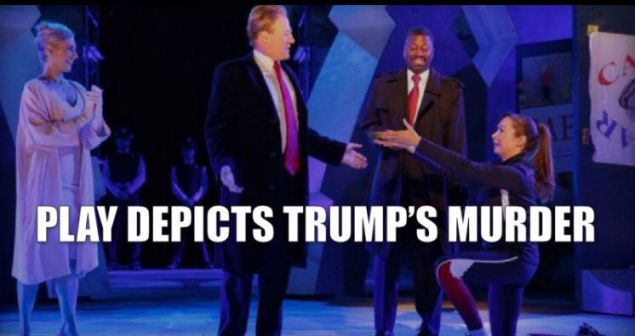 While the Broadway community debated the Tony Award winners Sunday night, the Public Theater, an Off Broadway nonprofit, was embroiled in a controversy of its own—and this one involves three of America’s best-known corporations, and the president too.

As part of its annual Shakespeare in the Park festival, the Public is presenting Julius Caesar in Central Park this month. And as several reviews have noted, the production features more than a few allusions to America’s current political situation—a blowup of the preamble to the Constitution is prominently displayed on the set, and the costumes include pussy hats.

Most provocatively, however, the title character (who is killed halfway through the play) is made up to look like President Donald Trump.

“Its depiction of a petulant, blondish Caesar in a blue suit, complete with gold bathtub and a pouty Slavic wife, takes onstage Trump-trolling to a startling new level,” Jesse Green wrote in The New York Times.

In light of this, several right-wing media outlets (including Breitbart) claimed the Public’s production advocates assassinating the president. Donald Trump Jr. also accused the play of “political speech” (never mind that Julius Caesar was written in 1599).

But this weekend, the controversy crossed over from the conservative blogosphere to the corporate boardroom.

In response to social media criticism from conservatives like Mike Huckabee, Delta Air Lines announced on Twitter that it was ending its sponsorship of the Public Theater effective immediately.

“No matter what your political stance may be, the graphic staging of Julius Caesar at this summer’s free Shakespeare in the Park does not reflect Delta Air Lines’ values,” the statement read. “Their artistic and creative direction crossed the line on the standards of good taste.”

Bank of America, another Public Theater sponsor, followed suit, though less drastically. The company announced that while it was withdrawing its sponsorship of Julius Caesar, it would still continue to support the theater as a whole (as it has for 11 years).

“While we value our partnership with the New York Public Theater and Shakespeare in the Park, we can’t condone this summer’s interpretation of Julius Caesar and its depiction of political violence in a modern context,” bank spokesperson Susan Atran told the Observer.

Many people on social media, including California congressman Ted Lieu, accused these companies of supporting censorship and limiting access to art (the Public’s Shakespeare in the Park performances are free).

Remember when @Delta & @BankofAmerica objected to Independence Day because the White House got blown up? Me neither. https://t.co/GWWPpdQthv

"A New York City play" — it's called Julius Caesar, and it's by William Shakespeare, you shit-stirring idiots. https://t.co/3aPbVVmrci

Disappointed in @Delta for turning its back on free expression. I've flown many thousands of miles with you. No more https://t.co/wLXaDef7Nr

Excuse me @Delta, as a Gold SkyMiles member and a New Yorker, what are you thinking? The Public Theater is an artistic institution. https://t.co/DlLn3l3YVR

As a @Delta frequent flier, I'm just embarrassed for you guys. Seriously. It's Shakespeare. https://t.co/mXW4R2YjTO

This morning American Express also released a statement distancing itself from the Public Theater, saying it does not fund Shakespeare in the Park and does not condone the production of Julius Caesar.

Ironically, Delta in particular has sponsored controversial productions of Julius Caesar in the past.  The airline supports the Guthrie Theater in Minneapolis, which in 2012 presented Shakespeare’s play with Caesar “as a tall, lanky black man” (a thinly veiled reference to President Barack Obama).

The Public Theater defended itself in a statement to the Observer.

“Our production of Julius Caesar in no way advocates violence towards anyone,” the statement read. “Shakespeare’s play, and our production, make the opposite point: those who attempt to defend democracy by undemocratic means pay a terrible price and destroy the very thing they are fighting to save. For over 400 years, Shakespeare’s play has told this story and we are proud to be telling it again in Central Park.”

Thankfully, most of the Public’s corporate sponsors are staying put, at least for now—The New York Times affirmed its support of the Public in a statement today.

“We have sponsored Shakespeare in the Park for 20 years,” the paper said. “As an institution that believes in free speech for the arts as well as the media, we support the right of the Public Theater to stage the production as they chose.” 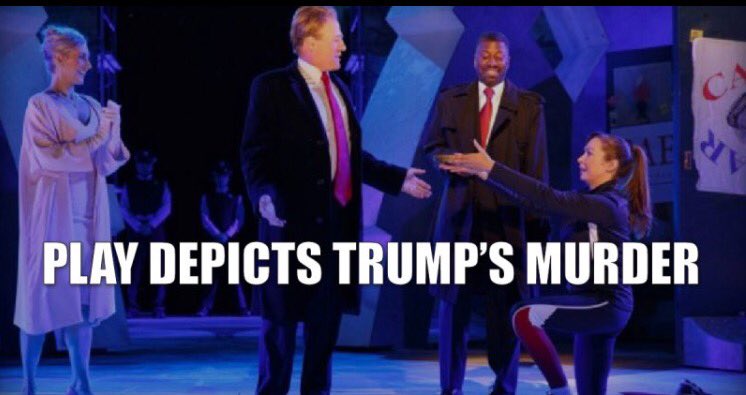