The beastie of the week is an interdimensional parasite that looks rather suspiciously like the hellhound from Hellboy, but topped with these glowing cuttlefish-like tentacles that shoot out and feed on all of the light in a person’s body. (I think? That seems to be what the Doctor says. How much light is in a person, though? Where in the body is light stored?)

In any case, these “eaters of light” (which give the episode its title) emerge every once in a while from a dimensional portal in ancient Scotland, and will suck all of humanity into black husks unless a warrior of the local tribe, the Picts, jumps into the gate with Iron Age weapons to drive it back.

But this time it doesn’t happen that way. The Picts have recently come under attack by a Roman legion, and so their last remaining soldier, a teenage girl named Kar, decides instead to let the alien creature through to fight off the Romans for them. Which it does—and then starts hunting everyone else.

Of course, the Doctor, Bill, and Nardole don’t show up there because they know there’s an alien threat. They’re only there because of a stupid bet. Bill—somehow thinking it’s wise to challenge a functionally immortal time traveler on his knowledge of history—claims she knows more about the Ninth Roman Legion than he does, so they wing off to second-century Aberdeen to see who’s right.

I suspect that one’s appreciation of Doctor Who is directly proportional to how much you enjoy this ongoing joke: The Doctor never quite means to jump directly into the middle of every crisis in the universe; he’s just taking his companion sightseeing, or following a whim, or literally just driving aimlessly, and somehow always ends up exactly where he is needed. Which of course drives the major tension of the show (which we discussed three weeks ago): If the Doctor is all about choice, why does it seem like all of his actions are predestined facts, as if he is just part of the fabric of the universe, keeping history on track?

This particular history involves a whole Roman legion that disappeared without a trace. The Doctor thinks they were killed by the locals; Bill thinks they slaughtered the Picts and made it away from there. Of course, they’re both right. The Romans murdered most of the Picts before Kar let the monster out to save what was left of her people. A few young Romans turned tail and fled, while the rest of the legion was turned into blackened, flattened half-corpses.

Very quickly, Bill ends up with the remainder of the legion, hiding in a cave, while the Doctor and Nardy find themselves parleying with the surviving Picts. The bulk of the episode tracks these growing relationships, as both the Doctor and Bill learn about different aspects of their situation and the monster. So that when they reunite they’re able to come up with a plan.

Mostly, though, this is an excuse to show us our heroes interacting with what are basically child soldiers. Giving us a view of the Doctor’s views on war, bravery and cowardice, sacrifice and nobility, that is even more blunt and stark than usual. (And a view as well of Bill’s own ideas on these topics, less fully formed and world-weary, but developing at an accelerated pace.)

Much as last week the Doctor coached a deserter to find the real strength within him and make common cause with his enemy, Bill helps the teenaged Romans, deserters themselves, to see the light. They’re not cowards, she tells them, they’re just scared, which is normal, but now they have to do what needs to be done. (They also exchange some excellent banter in which the Romans condescend to Bill about her lesbianism, which they find quaint and narrow-minded compared with their open bisexuality. Historically questionable, sure, but also hilarious.)

Meanwhile the Doctor goes on his usual rants about how all wars are basically squabbles between children, so this is really no different. He scolds Kar for using powers beyond her control to subdue her enemies, powers that now have the very real potential of destroying the world, once the beast swarms our dimension and eats all of the stars. Strange to find a metaphor for nuclear weapons in the second century, but I suppose that’s why we tune in.

At the same time, though, he steels Kar and her people in preparation for putting his plan into effect. The Doctor has discovered that time moves differently in the light-eaters’ dimension—a couple of seconds there is two whole days in our world. Which is why the tradition of sending a champion into the gate each generation worked: Each was only able to hold them off for a matter of minutes, but back in our world 60 years would have passed, long enough for a new warrior to replace the last.

The Doctor’s plan is to use poisoned light (never really explained, but it involves holding up this red gemstone to the sun) to drive the beast back into the gate. Then—the final part of the strategy, which he, as usual, doesn’t tell Bill and the others—he’ll jump into the rift and fight the monster for eternity, his longevity allowing him to protect Earth until there is no more Earth.

Throw out all your notions of sacrifice and honor, he’s saying to the assembled teenaged warriors. Those are ideas that your infant species came up with to give meaning to meaningless bloodshed. All that matters is doing what must be done.

But he’s wrong, and Bill knows it. He talks big, but he’s still nurturing his own ideas about honor, and his version of “what must be done” right now is shortsighted and self-serving. He has other gates to guard, now and in the future; he can’t sacrifice his whole eternity to this one job. Meanwhile the Romans and the Picts have finally united in one purpose: To run into the breach and protect the world themselves. Bill knocks the Doctor over the head to stop him from taking their place, and the combined forces jump into another dimension.

The suggestion is that, unlike a single Pict warrior, the group of them will be able to fight off the beast for long enough to be effectively forever in our world. And indeed, they say that if you listen very closely on the top of a hill in Aberdeen, you can hear the Picts’ military band still playing its music today.

Also listening to that music is Missy, having been released from her cell to help the Doctor work on the TARDIS engines (much to Nardole’s dismay, despite the fact that he himself freed her to fly the thing just last week). The song elicits a tear, which the Doctor believes to be a sign of her continued rehabilitation—and with it, a sign of the fact that they may find their ages-long enmity at an end. And we’ve got a two-episode arc to end the season, so it’s pretty clear that we’re going to cap it all off with the story of how all that works out. 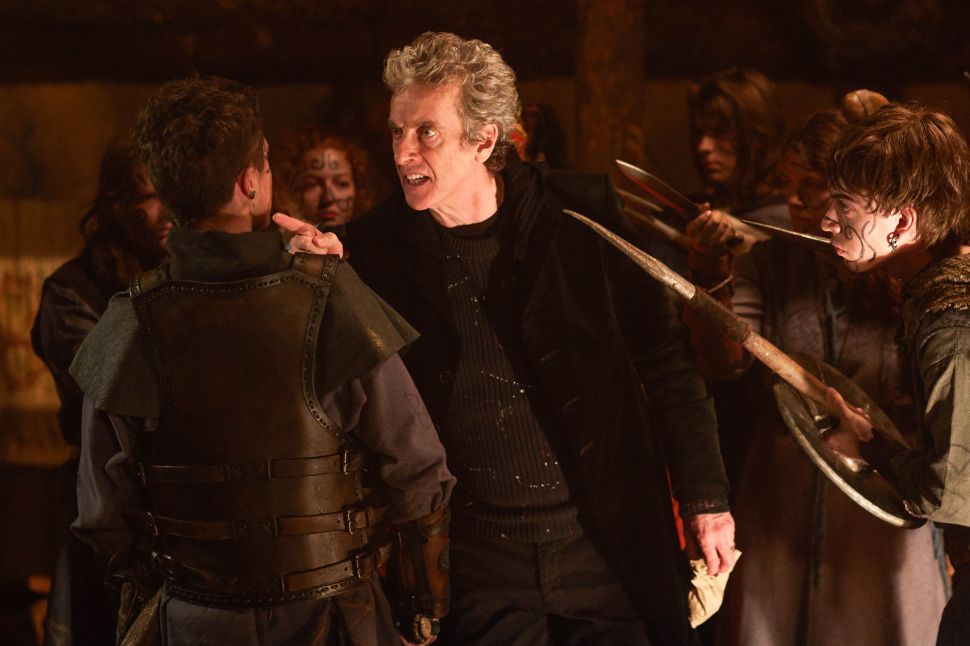