For a show about time travel, Doctor Who doesn’t play around with time near as much as you’d think. The vague concepts of “fixed points in time” and “not crossing one’s own timeline” seem to prevent our heroes from getting into hijinx, scrapes, and confusions of the “travel back in time a few minutes to correct the mistake you just made, with unexpected repercussions” variety you tend to see in stories about time travelers.

Instead, we get time as a potent and multivalent metaphor, used by the show for various stunning narratives: the Weeping Angels killing people with time by sending them into the past; Rory the Roman centurion waiting for centuries; the Doctor punching his way through a wall of diamond over billions of years.

This episode has one of the best of these to come along for a while. Spinning a variation on the Scottish dimensional portal in the last episode, this one gives us a unique setting with immense storytelling potential: a 400-mile-long colony spaceship accelerating away from a black hole.

A very brief science lesson is in order. In 1907, Einstein postulated that as a consequence of his special theory of relativity (which explains the relationship between space and time), two objects that are different distances from a single source of gravity will experience time at different speeds. For the object closer to the source, time will move more slowly than for the object farther away from it. His theory was proven correct in 1959: Your head, being farther away from the Earth experiences time faster than your feet do. Nanoseconds faster, of course, so this dilation of time due to gravity has absolutely no discernible effect on us. That is, until we run into a black hole.

Unlike the gravitational pull of the Earth—which keeps our feet planted on the ground and the moon in orbit around us but doesn’t suck us into a vortex from which not even light can escape—a black hole is, as the Doctor puts it, Superman-gravity. So many billions of times stronger than our usual experience of gravity, it causes time dilation so extreme that the effects on our 400-mile-long spaceship are remarkable: While 2 days pass on the black-hole-end of the ship (floor 1), literally 1,000 years have passed on the far end (floor 1056).

It is difficult to overstate how odd and fruitful a premise this is: as soon as they encountered the black hole, the crew of the ship sent an expedition down to floor 1056 to reverse the ship’s rear thrusters, and while mere hours had passed for those still on floor 1, the expedition party had lived whole lives, had children and generations of descendants, and had built a whole city there on floor 1056, a city that had already had time to grow old and crowded and choked with smog. All while their crewmates were experiencing a couple of days, wondering what had happened to their friends.

Into this very strange situation the TARDIS sets down, there for the first test of Missy’s reformation. She is to pretend to be the Doctor for a single rescue mission, and if she can refrain from killing everyone they will presumably deem it a success. But after some over-the-top banter about whether the Doctor’s real name is actually ‘Doctor Who’ (a conversation that is so cringingly meta—fans of the show bristle when non-fans mistake the name of the show for the name of its protagonist, etc. etc.—that it made my teeth itch) the stakes get way too high way too fast and the Doctor has to void Missy’s test and step in.

The lone remaining crew member on floor 1, a blue alien, is freaking out. They sent an expedition down, and in not too long, the system started reading thousands of new life forms on the lower floors. Then the elevators came back up and weird human-like creatures appeared, with faces wrapped in cloth, cybernetic parts, and computerized voices, and took all of the rest of the crew with them, leaving only him since he is not human. Now that there is another human onboard, namely Bill, the elevators are active once more, as they approach to take her away. Rather than having them return, Mr. Blue Man Group opts to shoot Bill right through the chest. And before the Doctor can stop it he’s managed to get Bill almost-but-not-quite dead yet again.

Almost, because the face-wrapped freaks arrive anyway to cart Bill away and announce that they can “repair” her. The Doctor tells her to wait for him, and while he takes a few minutes figuring out the whole gravity-time thing, Bill lives for several years in the grimy city that is floor 1056, having her heart replaced with a cybernetic one, and befriending and going to work for Mr. Razor, the hospital’s homunculus of a maintenance man. In his own inimitable way, Mr. Razor eventually explains what is going on: we’re moving millions of times faster than your friends on floor 1, and that’s them there on the screen, crawling through a single facial expression. Also that mechanical heart of yours won’t last forever, so we’re going to have to turn you into one of those face-wrapped weirdos, who by the way are humans who we are “curing” by putting them in constant excruciating pain.

But here is what is really going on: The residents of 1056 are dying. The ship was meant to sustain life for long stretches of interstellar travel, but not hundreds of  generations over thousands of years. Their environment has become increasingly hostile, and evolution cannot keep up. So their scientists have decided to forcibly evolve humanity with cybernetic implants, allowing them to survive and eventually take over the ship in a project they are calling Operation Exodus.

But here is what is really really going on: The ship is not supposed to carrying a colony from Earth, but rather from Mondas, our planet’s secret twin planet, introduced all the way back in 1966’s “The Tenth Planet” as the original home of the Cybermen. It turns out that one of Missy’s previous incarnations as the Master (the one played by John Simm who became prime minster of the UK in season 3 and tried to wipe out humanity using humans from the future) had discovered the ship caught in its strange gravity-time dilation and seized the opportunity of all that time and all those suffering generations to forge a race of cyborgs to invade the universe, thus becoming the original creator of the Cybermen. Phew.

Disguising himself as Mr. Razor to avoid Bill recognizing him as the former Prime Minister, the Master twists the knife by befriending the Doctor’s companion and then turning her into a Cyberman as well. Having finally figured out (some of) what is happening, the Doctor, Nardole, and Missy take the elevator down to the bottom floor, but they’re too late. They discover the truth about Mondas and the Master, but  Bill’s already Cyberman, a tear dropping from her metal eye as she tells the Doctor that she did wait for him. And Missy, faced with her evil former self, is now going to be put to the real test, not the stupid one the Doctor devises. With whom will her loyalty lie—with her friend or with herself from long ago?

I love episodes like this one with huge, interesting premises, and it is pleasantly mind-bending to think about how a whole civilization might arise and grow old while someone else in a different “time zone” might experience a single day. But such stories come with their pitfalls. It spends way too much effort and runtime teasing the premise and not nearly enough using it to tell a story or explore its implications, instead rushing on to the next twist of the plot. And it leads to so many unanswered questions, some of which will probably be put to rest in next week’s finale, but if the past is any indication will most likely be left open.

For example: How is it possible that Missy doesn’t remember doing any of this? She may be very old and quite insane, but would she really fail to remember a place she spent years, possibly decades, planning a huge project like the creation of the Cybermen? Could she have forgotten the first time she encountered this version of the Doctor, for that matter? And then, how did the Master know it was her/him? All he has to go on is less than ten minutes of soundless film run at one-millionth speed—could he really figure it out from this paltry evidence?

Why do the proto-Cybermen return to the top of the ship and kidnap the remaining human crewmembers? Blue Guy says anytime they sense a human they come and take them away, but there are millions of unconverted humans milling around on Floor 1056. Maybe they’re doing so under orders from the Master to avoid future conflict, but then why bother leaving Mr. Blue alive?

If the elevator can go back and forth from one end of the ship to the other with no time effects, why did the original crew expedition to the far end of the ship stay down there long enough to have kids and die? When they discovered the crazy time dilation that was happening, why not pop back up to the top of the ship rather than live out their lives down there? We can understand why future generations might have wanted to stay, but why them?

And so on. There is a lot that doesn’t make sense here, obviously, but overall this was one of the most compelling and surprising episodes to come along in a while, and I’m excited to see what becomes of the world’s strangest love triangle (is it a triangle when two sides are the same person?), and whether the Doctor is really about to regenerate once again, in next week’s season finale. 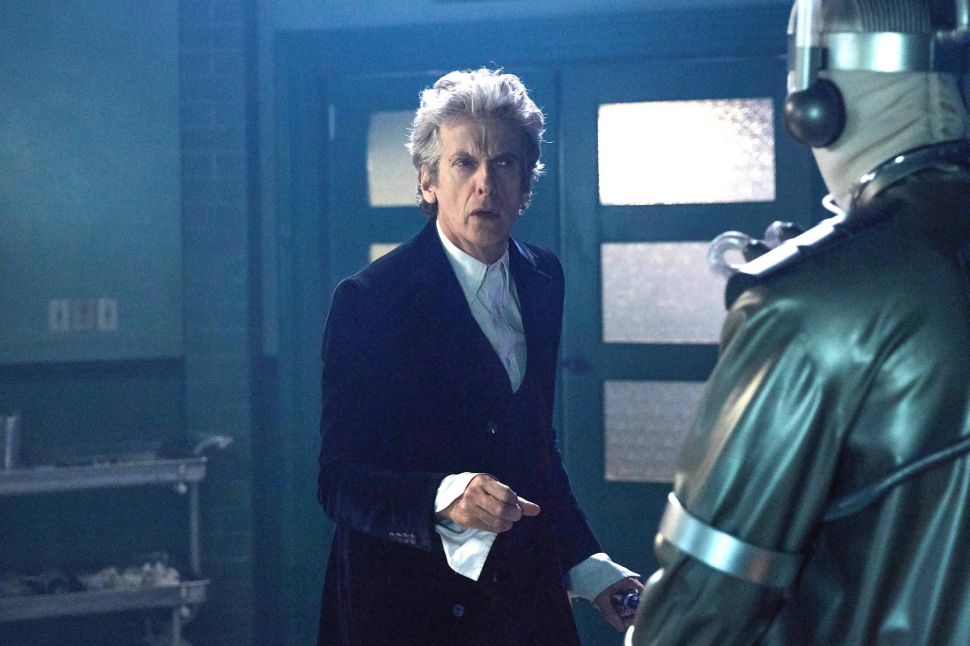