“Your version of ‘good’ is not absolute,” Missy tells the Doctor about midway through “The Lie of the Land,” after he moralizes at her for a while.

Coming in the middle of an episode that is largely an extended metaphor about propaganda and misinformation, this becomes a key point. Everyone is always telling us the Doctor is our hero, and this is undoubtedly true. But does that mean he always does what is best for us? Well…sort of.

The Doctor lives by a moral code, but Missy’s not wrong when she calls that code “vain, arrogant, sentimental.” He always needs to play the hero, needs to have the audience and the applause line, loves to perform the noble sacrifice. And while he may be humanity’s great defender, he doesn’t always act in the best interests of all humans. (He’s actually quite the misanthrope, as he fully admits at the end of the episode.) Instead he connects emotionally with specific special humans like Bill and fixates on them, making them the proxy for our species, and risking everything to save just them. Sometimes even if it means putting the rest of us in more danger.

This is behavior he has modeled for his companions so thoroughly that they are often doing the same for him in turn—like Bill, at the end of the last episode, ransoming the entire planet just to save the Doctor. She may justify her choice by saying that without the Doctor our planet would be screwed anyway, but the fact remains she was choosing one life she loved over all of humanity.

(Note that it was exactly this kind of codependent relationship, two powerful people who would do anything for one another no matter the cost, that made Clara and the Doctor into the Hybrid of myth, the most dangerous thing in the universe. The Doctor paid an unimaginably high price for that folie à deux, and yet here he is falling right into another one.)

But now that she has made her choice, Bill is in a worldwide hell of her own making, a world in which the Monks have rewritten all of history so that we believe they have been with humanity all along, shepherding us from prehistory as our benevolent overlords. Only she and a few others seem to realize this narrative is false, that the Monks have only been around for six months, and the true history is getting harder and harder to remember. Bill only seems to hold onto it by focusing on a projection she has created of the mother she’s never met, and by hoping that her stratagem worked and the Doctor is hatching a plan to save them all.

Unfortunately all she or anyone has seen of the Doctor are untraceable propaganda messages he is making on the Monks’ behalf. When she finally does track him down, via Nardole and some rather goofy cloak and dagger, he persists in declaring that he has thrown his support behind the Monks. It’s all a trick, of course. And as a TV twist it’s pretty weak—there is no way a viewer could believe the Doctor has turned his back on humanity, and certainly not that Bill kills him for it. (The whole regeneration bit is even worse, and seems simply inserted to have a great visual for the trailer.) So we obviously know what is coming.

But as a scene it is spectacular, centered on a truly heartrending performance from Pearl Mackie, who’s in top form in this episode, but especially here. And also amazing in that, for a moment, we get a portrait of what the Doctor might be like if he took a Missy-like view of humanity instead: on our side, but dispassionately focused on the greater good.

It’s a chilling sight, not only because he suddenly seems so thoroughly alien and cruel, but also because, like Missy, he isn’t really all that wrong. Left to our own devices, humanity has done awful things; we’ve been in pretty much continual bloody conflict, and nearly ruined the planet. Maybe benevolent overlords are exactly what we need, even if they need to spread false history to make it all work. When Bill reasonably protests (like I did last week) that this goes against the Doctor’s nature, as he is all about free will, he also reasonably counters, well, and look what you’ve done with it.

He’s saying ‘look what humanity has done with its free will’ (wars, devastation, Nickelback), but what he really means is “Look what you, Bill, did when you had free will! You chose against all reason to accept the full-scale enslavement of your planet in exchange for one life! What good is free will if that is the case?”

The answer, of course, is that free will is a fundamental good in itself. A fundamental good that Bill enforces from the barrel of a gun, and so shows herself to be free from the influence of the Monks and able to join the Doctor’s cause. Making the reveal simultaneously predictable and emotionally satisfying as a release of the dissonance built up in Bill’s actions since last week.

So their way-too-elaborate ruse exposed (did they really need to get this many actors involved for a simple trick?), they are off to talk to the “only person almost as smart as” the Doctor, finally opening the vault and letting us inside. And man have I missed Michelle Gomez, for whose performance here “chewing the scenery” seems a woefully inadequate expression. She masticates her surroundings into a thick paste and builds whole cityscapes of verbal papier-mâché. And it always works, but particularly here, because she’s playing stir crazy, an active mind trapped in a box with no visitors for six months.

Introducing her to Bill with the winking sobriquet “the other last of the Time Lords,” the Doctor begs to know how to defeat the Monks. The answer is simple: Make Bill brain-dead. She’s the conduit through which the Monks’ fake history is transmitted to every human mind, and if she transmits nothing, their dominance fails.

The Doctor, being the Doctor, refuses to accept this, and decides to heroically brute force his way into the transmission, overriding its signal with his superior mind. But when that doesn’t work, Bill steps up and offers her mind to the machine. If it erases her memory it will effectively destroy its own purpose at the same time.

Her mind almost gone, Bill focuses on one though: her mother. Whom she has never met. Who is actually just a construct she has created in her own head. And so, beautifully, the Monks cannot access it, cannot override it. It isn’t a memory they can destroy or adapt because it is a passionate fiction.

Here’s where things get really interesting, because this is an episode clearly aimed at our era of “alternative facts.” The whole concept—this isn’t the way the world is supposed to be, history has changed somehow—has been done many times before, but rarely with this specific focus on media and transmission. At one point the Doctor even refers to the false history the Monks have provided as “fake news,” making it explicit: this is a story about propaganda and the flexibility of truth within an irredeemably partisan political climate.

But then what is the solution to this problem suggested here, as represented by Bill’s imaginary projection of her mother? Is our way out family? Imagination? Art? Love? All of the above combined in a heady and sentimental mix? The metaphor gets muddied, which makes the ending a bit anticlimactic. Especially since humanity seems to have learned nothing from its six-month ordeal, their memory of the Monks fading as fast as it was created for them.

Forming a beautiful contrast at episode’s end, as Missy reveals her real struggle as she tries to become good: the memories. Images of everyone she has hurt over centuries of being evil are coming flooding back to her, overwhelming her desire to be good. And man, David Boreanaz better be looking at this performance and crying into his guyliner, because that is how you do repentance for a life of soulless murder. 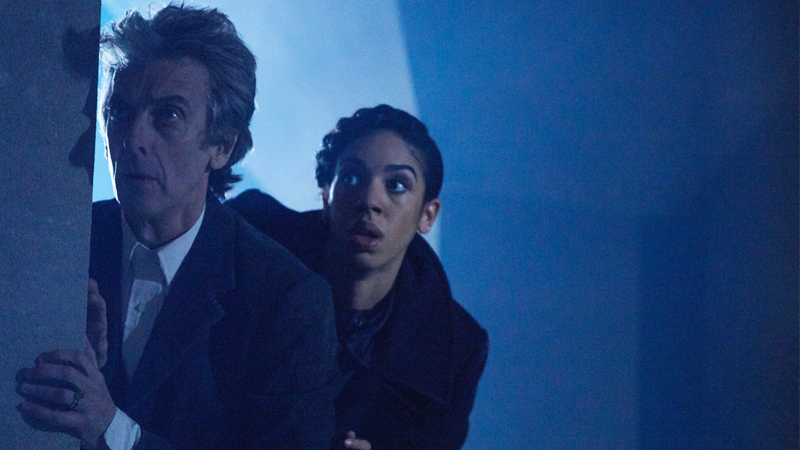