Except for the rather provisional presence of Missy, the real overarching arc of this season of Doctor Who has to do with the evils and excesses of capitalism. Certainly a theme the show has touched on at various points before, but never quite with this Marxist intensity. So after episodes dealing with slavery (“Thin Ice”), landlords (“Knock Knock”), and industrial labor (“Oxygen”), it was inevitable we’d eventually get to capitalism’s ultimate expression: imperialism.

And who better to show us the imperial mindset than a regiment of late 19th century British soldiers? Under the command of the delightfully named Colonel Godsacre, who discovered a Martian spaceship crash-landed on Earth and revived its reptilian occupant, they’ve flown to the red planet to claim it and its riches in the name of Queen Victoria. And as usual, they eventually come into contact and conflict with natives who are none too happy to be told they are now part of the British Empire.

But this is where the narrative shifts, turning into something quite different than just a parable about imperialism. Because unlike the peoples subjugated by the British in every corner of our planet, the indigenous species of Mars, the Ice Warriors, are vastly more powerful than their supposed colonizers. And what seemed to be a story about greed and appropriation is revealed to be a story about honor and sacrifice.

The military might of the Ice Warriors puts the Doctor in something of a difficult place: He can’t side with the humans, who are essentially the invaders here, but he also can’t just stand aside as the Empress of Mars exterminates them for their stupidity. Sure, they’re greedy, arrogant and cruel, but they have also been tricked by an alien who manipulated their greed, arrogance and cruelty to his and his race’s own ends. Friday, their stranded alien servant, has acted subservient and promised them nonexistent riches as a ploy to get them to revive his hibernating empress.

The Doctor tries to broker a peace, usually something firmly in his wheelhouse but he’s hamstrung by his tenuous position. He tells the Empress she is going to need the humans to help her people survive on this dead planet, but he knows that is not necessarily true.

Meanwhile, the humans don’t really constitute a great negotiating partner, since they’re internally divided. Godsacre takes a cautious stance, understanding they’re up against a superior enemy. But his second-in-command, the equally charmingly named Captain Catchglove, knows him to be a deserter (he’s been blackmailing him with it for years) and so assumes Godsacre’s prudence is just cowardice. Add to this his massive greed and arrogance, and he is able to ignore just how outmatched the British are here. He exposes his superior’s dark secret, assumes command and goes to war. And the men, tired, bored and wanting their share of their promised treasure, go for it, walking right into their own slaughter.

When he sees the tide turn against them, Catchglove reveals himself to be the true coward here, taking the Empress hostage so she will fly him back to Earth, effectively sacrificing the lives of all of the men so he might live. And Godsacre finally finds his own bravery, killing Catchglove and saving the Empress. Impressed by the fact that he would do so simply because he believed it was right, rather than for any tactical advantage, she agrees to spare his life if he will become her loyal soldier.

This is the perfect conclusion for Godsacre; unlike his me, who made the trip for glory and riches, he was always just seeking a fresh start, and now he has one, traveling with the Ice Warriors to their new home on Alpha Centauri and launching the start of the Martian Golden Age.

But what about the rest of the men? He explicitly says that nobody will now ever know there were people on Mars in 1881, since he’s headed to the stars. This jibes with what we know—at the beginning of the episode the Doctor was shocked to find the words “God Save the Queen” written in gigantic letters underneath the Martian icecap, since as far as he knew humans hadn’t gotten there yet. (They wrote the words as a cheeky beacon for the Alpha Centaurians to navigate by.) But that implies that the rest of the humans were either left to die on Mars or came with the Ice Warriors, and neither seems particularly plausible.

Also, why is Bill (a character who is pretty much wasted in this episode) suddenly obsessed with movies and getting the Doctor to watch more of them? Her whole “I’m the companion who talks about pop culture!” thing is annoying enough as it is, but this is weirdly specific and seems to come out of nowhere.

And finally, what was going on with the TARDIS in this episode? Soon after they land on Mars, Nardole goes back inside to get some supplies and the TARDIS self-flies itself back to the present without warning. Usually when this happens it is because the TARDIS is protecting either itself or the Doctor from a threat which they do not yet see. But that doesn’t seem to be the case here, so why did it fly away on its own and refuse to let Nardole return on his own?

If anything, it seems like it was trying to avoid a paradox: It is possible that the Doctor, realizing he couldn’t really take sides in this conflict, might have left them to their own devices if the TARDIS was available to him. But if that happened, they would not have been able to contact Alpha Centauri, and so they would have had no reason to create the gigantic letters that were the whole reason the Doctor came there in the first place.

Or maybe the TARDIS just wanted an excuse to bring Missy out of her cage and onboard. A development the Doctor is none too happy with. 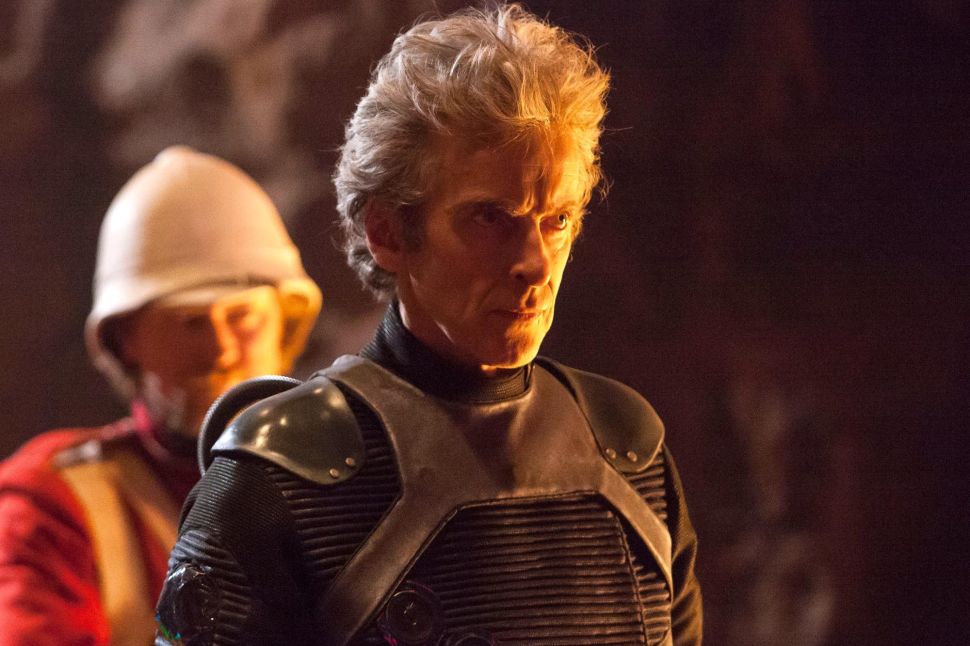