In a world that relies on the hard skills of science, accounting, engineering and so forth, the humanities seem like a quaint stopover for kids who don’t know what they want to do. That said, it also always showed that a person valued education, that they could stick to a three to four year degree, and learn in an adult environment where they had to take responsibility for themselves. Over the past five years, however, universities around the western world have become hotbeds of protest and activism. It seems like every week, and sometimes multiple times a week, there is a new controversy on a campus somewhere. This has caused me to ponder something: Could a humanities degree soon become a detriment to one’s career prospects?

It’s not just about the activism, although that has to be a factor. The ferocity of some of these protests has to be seen to be believed. Students screaming in the face of professors, some even getting so hostile that professors have had to hold classes off campus because their safety cannot be guaranteed. In addition, the vast majority of these protests are over absurd issues: Mexican food being served at a space-themed party, cultural appropriation of Halloween costumes, white people objecting to being told to stay off campus. All of these protests have something in common: they start in the humanities, where students are being indoctrinated into thinking that everything they don’t like is offensive.

I remember back when I was at university studying, you guessed it, the humanities. There were always a few fringe people that got themselves worked up over whatever social issue they perceived to be more important than anything else. They were always thought of as a little bit weird, because the vast majority of students were just there to learn. Likewise the lecturers may have slanted slightly left (most were actually very much in the center), but they never veered into teaching their personal opinions as fact, or so boldly proclaimed that Marxism was the cure to all ills, or that the white man was the oppressor of the whole world.

The fact that this is going on in campuses around the entire Western world has caused me to wonder, what do employers think of this kind of behavior? I’d wager that any employer in their right mind looks at these events and vows to steer clear of any prospective employee with a humanities degree, no matter what it is. It’s not just because these students carry on like screaming banshees on a regular basis, it’s because the values of these two groups are completely at odds with each other. Speak to any employer or someone hiring for a position, and the likely traits they are looking for in a new employee are:

Now, large companies also value diversity, visions, mission statements, and all those kind of profound virtues. But businesses have their own hierarchy of needs, and the bottom of that hierarchy are the traits you see above. Anyone who studies degrees such as law, economics, accounting, or anything in STEM generally has those traits as a default. It’s a mixture of the people going into those degrees already possessing those traits due to their personality profile, but the level of competition and the technical difficulty in those subjects also breeds a mindset that is conscientious, competitive, and employer-friendly.

The humanities, on the other hand, are teaching their students to be the antithesis of every single one of those values. Students in the humanities nowadays learn to try and sniff out anything that could be perceived as racism, bigotry, cultural appropriation, and so on, whether it actually exists or not. And an employer can rest assured that it will never just be a matter of a quick discussion with the offended party, because there is never any room for compromise in today’s college students. If they disagree in any way, they can expect to be shouted at, called any one of a dozen different slurs, or even protested with a picket line outside their business.

Why would any sane person running a business or a department within a business want anything to do with that?

Then there is the victim mentality that the humanities are breeding in their students. If you aren’t successful, if you aren’t being promoted quickly enough, if you aren’t earning as much as you believe you should, it’s not your fault. It’s never your fault, it’s whomever you perceive to be holding you down. That’s because the world is divided into oppressor and oppressed, and if you feel oppressed, then obviously the person above you is doing the oppressing. You’re not getting a promotion because of your appearance, or because of institutional racism, or because your employer is transphobic. The bottom line is, it’s because they’re unreasonable. It couldn’t possibly be because you don’t have the skills, the knowledge, the experience, or the work ethic.

Worst of all is the inability for the current crop of humanities students to see any kind of reason. Whether it’s a performance review, a dispute with a colleague, or a request by a superior that the person deems to be unreasonable, a routine event can turn into a human resources nightmare in the space of a single conversation. God forbid one of these people has rich parents and they decide to drag the unsuspecting employer into court.

Quite frankly, if I were an employer, any prospective hire with a humanities degree from the last five years would have to work pretty hard to convince me that they were worth the risk. Of course it’s unfair to tar all humanities students with the brush of those who screech loudest, but that’s what happens when hiring one of them could sink your business. No sane person would want one of these trained activists within a thousand yards of their business, because all they do is cause trouble. Sure, in employing a humanities graduate you might find the gold standard of worker, but the risk that you’ll get a trouble-causing activist isn’t worth it.

The other big question is for parents out there: do you actually want to pay (or have your children take on student loan debt) tens of thousands of dollars for your children to be turned into volunteer victims and activists who can’t find a job? Better to use that money towards a degree that actually teaches something useful, and provides a real future. 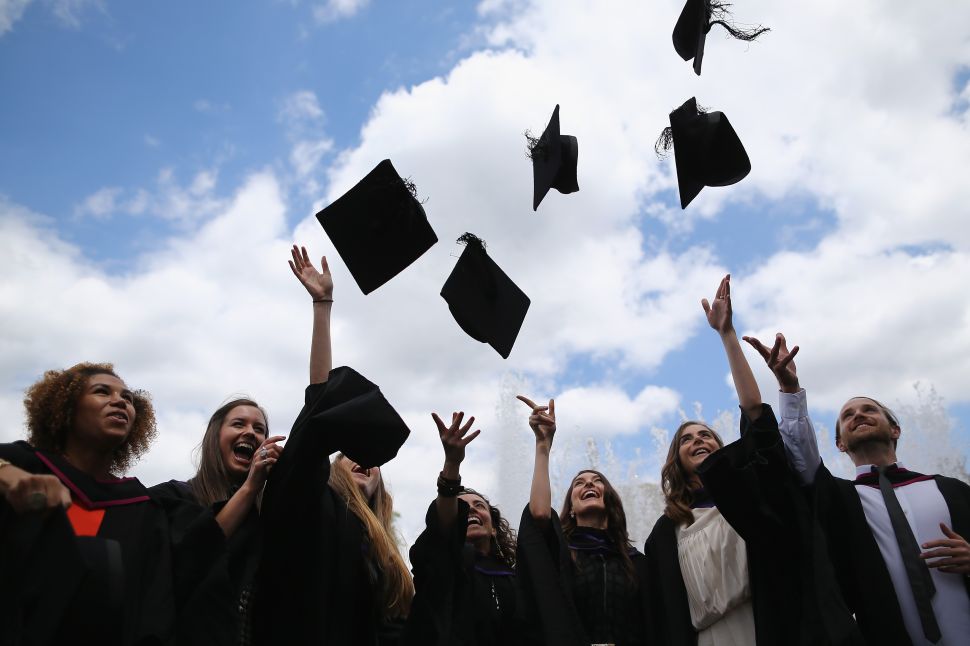