A subject plays a computer game as part of a neural security experiment at the University of Washington. Patrick Bennett

In the 1995 film “Batman Forever,” the Riddler used 3-D television to secretly access viewers’ most personal thoughts in his hunt for Batman’s true identity. By 2011, the metrics company Nielsen had acquired Neurofocus and had created a “consumer neuroscience” division that uses integrated conscious and unconscious data to track customer decision-making habits. What was once a nefarious scheme in a Hollywood blockbuster seems poised to become a reality.

Recent announcements by Elon Musk and Facebook about brain-computer interface (BCI) technology are just the latest headlines in an ongoing science-fiction-becomes-reality story.

BCIs use brain signals to control objects in the outside world. They’re a potentially world-changing innovation – imagine being paralyzed but able to “reach” for something with a prosthetic arm just by thinking about it. But the revolutionary technology also raises concerns. Here at the University of Washington’s Center for Sensorimotor Neural Engineering (CSNE) we and our colleagues are researching BCI technology – and a crucial part of that includes working on issues such as neuroethics and neural security. Ethicists and engineers are working together to understand and quantify risks and develop ways to protect the public now.

Picking up on P300 signals

All BCI technology relies on being able to collect information from a brain that a device can then use or act on in some way. There are numerous places from which signals can be recorded, as well as infinite ways the data can be analyzed, so there are many possibilities for how a BCI can be used.

Some BCI researchers zero in on one particular kind of regularly occurring brain signal that alerts us to important changes in our environment. Neuroscientists call these signals “event-related potentials.” In the lab, they help us identify a reaction to a stimulus. 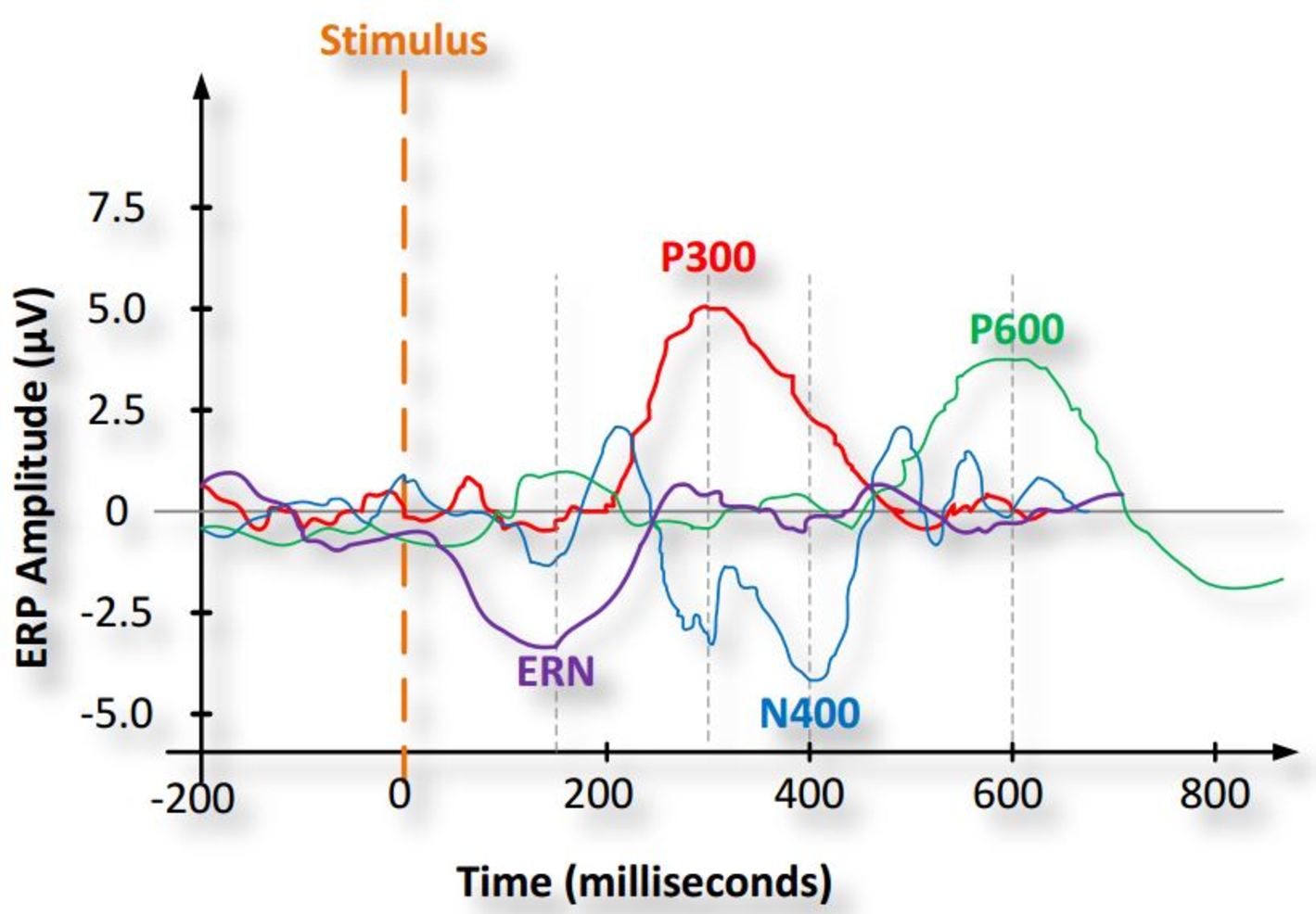 Examples of event-related potentials (ERPs), electrical signals produced by the brain in response to a stimulus. Tamara Bonaci

In particular, we capitalize on one of these specific signals, called the P300. It’s a positive peak of electricity that occurs toward the back of the head about 300 milliseconds after the stimulus is shown. The P300 alerts the rest of your brain to an “oddball” that stands out from the rest of what’s around you.

For example, you don’t stop and stare at each person’s face when you’re searching for your friend at the park. Instead, if we were recording your brain signals as you scanned the crowd, there would be a detectable P300 response when you saw someone who could be your friend. The P300 carries an unconscious message alerting you to something important that deserves attention. These signals are part of a still unknown brain pathway that aids in detection and focusing attention.

P300s reliably occur any time you notice something rare or disjointed, like when you find the shirt you were looking for in your closet or your car in a parking lot. Researchers can use the P300 in an experimental setting to determine what is important or relevant to you. That’s led to the creation of devices like spellers that allow paralyzed individuals to type using their thoughts, one character at a time.

It also can be used to determine what you know, in what’s called a “guilty knowledge test.” In the lab, subjects are asked to choose an item to “steal” or hide, and are then shown many images repeatedly of both unrelated and related items. For instance, subjects choose between a watch and a necklace, and are then shown typical items from a jewelry box; a P300 appears when the subject is presented with the image of the item he took.

Everyone’s P300 is unique. In order to know what they’re looking for, researchers need “training” data. These are previously obtained brain signal recordings that researchers are confident contain P300s; they’re then used to calibrate the system. Since the test measures an unconscious neural signal that you don’t even know you have, can you fool it? Maybe, if you know that you’re being probed and what the stimuli are.

Techniques like these are still considered unreliable and unproven, and thus U.S. courts have resisted admitting P300 data as evidence. 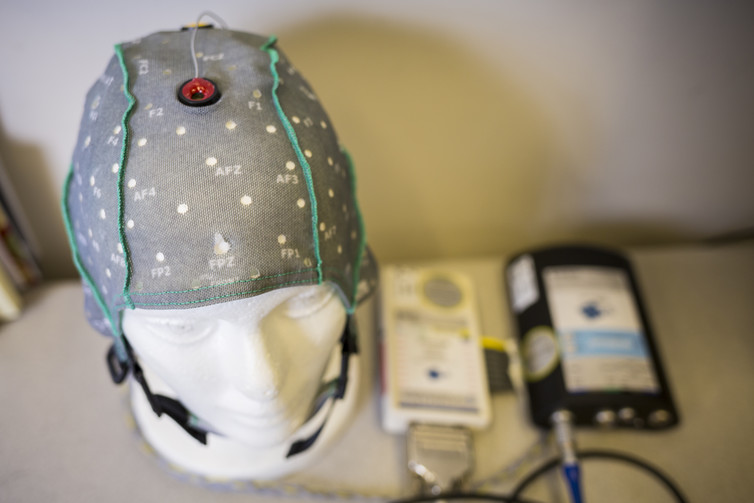 For now, most BCI technology relies on somewhat cumbersome EEG hardware that is definitely not stealth. Mark Stone, University of Washington

Imagine that instead of using a P300 signal to solve the mystery of a “stolen” item in the lab, someone used this technology to extract information about what month you were born or which bank you use – without your telling them. Our research group has collected data suggesting this is possible. Just using an individual’s brain activity – specifically, their P300 response – we could determine a subject’s preferences for things like favorite coffee brand or favorite sports.

But we could do it only when subject-specific training data were available. What if we could figure out someone’s preferences without previous knowledge of their brain signal patterns? Without the need for training, users could simply put on a device and go, skipping the step of loading a personal training profile or spending time in calibration. Research on trained and untrained devices is the subject of continuing experiments at the University of Washington and elsewhere.

It’s when the technology is able to “read” someone’s mind who isn’t actively cooperating that ethical issues become particularly pressing. After all, we willingly trade bits of our privacy all the time – when we open our mouths to have conversations or use GPS devices that allow companies to collect data about us. But in these cases we consent to sharing what’s in our minds. The difference with next-generation P300 technology under development is that the protection consent gives us may get bypassed altogether.

What if it’s possible to decode what you’re thinking or planning without you even knowing? Will you feel violated? Will you feel a loss of control? Privacy implications may be wide-ranging. Maybe advertisers could know your preferred brands and send you personalized ads – which may be convenient or creepy. Or maybe malicious entities could determine where you bank and your account’s PIN – which would be alarming.

The potential ability to determine individuals’ preferences and personal information using their own brain signals has spawned a number of difficult but pressing questions: Should we be able to keep our neural signals private? That is, should neural security be a human right? How do we adequately protect and store all the neural data being recorded for research, and soon for leisure? How do consumers know if any protective or anonymization measures are being made with their neural data? As of now, neural data collected for commercial uses are not subject to the same legal protections covering biomedical research or health care. Should neural data be treated differently? 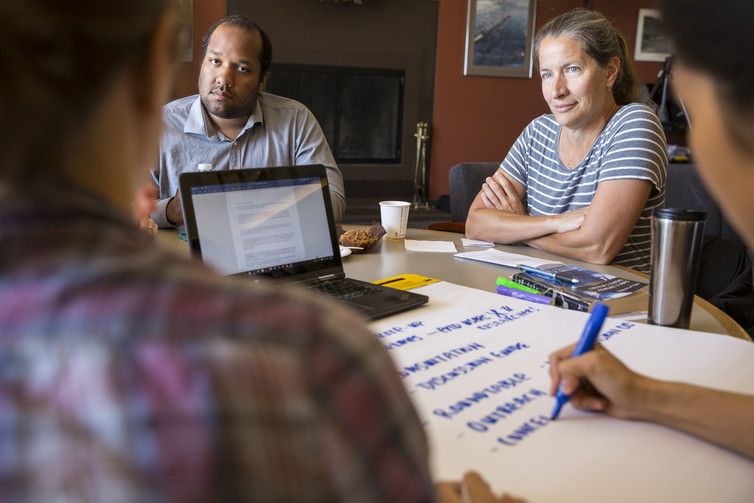 These are the kinds of conundrums that are best addressed by neural engineers and ethicists working together. Putting ethicists in labs alongside engineers – as we have done at the CSNE – is one way to ensure that privacy and security risks of neurotechnology, as well as other ethically important issues, are an active part of the research process instead of an afterthought. For instance, Tim Brown, an ethicist at the CSNE, is “housed” within a neural engineering research lab, allowing him to have daily conversations with researchers about ethical concerns. He’s also easily able to interact with – and, in fact, interview – research subjects about their ethical concerns about brain research.

There are important ethical and legal lessons to be drawn about technology and privacy from other areas, such as genetics and neuromarketing. But there seems to be something important and different about reading neural data. They’re more intimately connected to the mind and who we take ourselves to be. As such, ethical issues raised by BCI demand special attention.

Working on ethics while tech’s in its infancy

As we wrestle with how to address these privacy and security issues, there are two features of current P300 technology that will buy us time.

First, most commercial devices available use dry electrodes, which rely solely on skin contact to conduct electrical signals. This technology is prone to a low signal-to-noise ratio, meaning that we can extract only relatively basic forms of information from users. The brain signals we record are known to be highly variable (even for the same person) due to things like electrode movement and the constantly changing nature of brain signals themselves. Second, electrodes are not always in ideal locations to record.

All together, this inherent lack of reliability means that BCI devices are not nearly as ubiquitous today as they may be in the future. As electrode hardware and signal processing continue to improve, it will be easier to continuously use devices like these, and make it easier to extract personal information from an unknowing individual as well. The safest advice would be to not use these devices at all.

The goal should be that the ethical standards and the technology will mature together to ensure future BCI users are confident their privacy is being protected as they use these kinds of devices. It’s a rare opportunity for scientists, engineers, ethicists and eventually regulators to work together to create even better products than were originally dreamed of in science fiction.