I’d be lying if I said I wasn’t a tad nervous before interviewing Mike Tyson. This is the boxer who once bit off opponent Evander Holyfield’s right ear and spit it out as if he found a seed in a slice of watermelon. The guy who earned the title as “The Baddest Man on the Planet,” whom even on the cusp of turning 50, looks like he could jump back into the ring right now and knock someone out with one good right hook to the jaw. Tyson didn’t peg me as the kind of guy you’d want to accidentally piss off.

However, those who grew up in the 80s can still remember the era of Iron Mike as if it were yesterday, Tyson was legendary. Even people who didn’t like boxing loved to watch his matches. And when his fighting days came to an end, his personal life started making headline news, and for much less stellar reasons.

After countless run-ins with law, a few years in prison, bankruptcy, and two divorces Tyson stood before me with a huge smile on his face. He walked over for our interview with a literal skip in his step, and has a natural self-deprecating kind of humor. He’ll be the first one to make light of his sordid past which I found to be hilarious..

Tyson’s career received a commercial resurgence in 2009 after playing himself in the blockbuster comedy, The Hangover, and he’s been a working machine ever since. He wrote The New York Times bestseller, Undisputed Truth, starred on Broadway with his one-man show of the same name, voices the star character in Adult Swim’s Mike Tyson Mysteries, which is now its third season, and in May, released a second book, Iron Ambition.

While it’s hard to wrap my brain around the fact that Tyson has written not one, but two (two!) books, watching him as a panelist on a competition reality show like Superhuman makes perfect sense. It takes talent to recognize talent, and this Hall of Fame boxer lives to see other people’s extraordinary, sometimes insanely bizarre skills used to compete on this series.

So, what brought you back to be a panelist on Superhuman?

This is some amazing stuff and we’re all trying to make a buck. The pay is great! And this is something most people won’t see, and it gives a platform [for these contestants] to show off their unique talents. I’m nothing less than totally amazed. First season, I was like this is cute. But now, it’s mind boggling.

What are your secret, superhuman talents?

I can mess up money real good. I’m really just super at that.

If you could have super human talent, what would it be?

That could get ugly, though.

That could be really cool though, too.

If you could take on a superhero in the ring, who would it be?

Maybe Superman. I like Batman. I like them all. But it would have to be a Marvel guy.

I would hope so.

What’s the most super year of your life?

Today. Every year is super. I’m surviving and living and this living this dream life. Every day is the best day of my life.

Sorry, I get carried away sometimes.

Wilmer Valderrama Gets Choked Up Because Empathy Rocks

If the consumption of Sprinkles cupcakes and Layer Cake wine always translated into making money for charity, the world be a better place. However, it’s only at the Children Mending Hearts 9th Annual Empathy Rocks Fundraiser in Los Angeles, Ca., that these acts count towards a greater good. Tinseltown can be criticized for a zillion things, but when it comes to the effort and generosity spent to help those in less fortunate circumstances, few other cities stack up.

Children Mending Hearts was founded by filmmakers Lysa and Grant Heslov back in 2008 with the goal to empower kids through an arts education. By encouraging kindness and empathy to children throughout the world, they’ve impacted nearly 20,000 young lives by teaching them how to express themselves, and connect with others through the creative arts.

On a perfect, sunny Sunday afternoon, at a private estate in Bel Air, the Heslovs honored their donors and standout humanitarians with a party meant entertain both kids and adults. Mothers received tarot readings by Pauline Nash while their children designed T-shirts courtesy of Michael Stars. Numerous Dads sipped on custom Casamigos tequila cocktails while their kids waited in line for fresh cotton candy. There was a delectable food spread donated by Vintage Grocers that included filet mignon and bleu cheese sliders, chicken satay with pineapple, and these ahi tuna poke fried wontons, the latter for which I was completely addicted. I also sat in a preschool sized chair to decorate vanilla and chocolate cupcakes with rainbow sprinkles. Age is but a number, amiright?

During the awards ceremony, Teen Wolf’s Holland Roden, Girl Meets World star Rowan Blanchard, and NCIS’s Wilmer Valderrama, were recognized for their work, and during the latter’s acceptance speech, the former That 70s Show actor, who now stars on NCIS got choked up.

“I was raised in Venezuela until I was about 14 years old,” Valderrama said. “I was failing all my English classes. When Dad said we’re going to America, [I was like] that really sucks. Two months later, [I was] in Miami, and it was not a good look.”

“But we came to Los Angeles, and back in the late 90s, there were zero Latinos on television. I had a crazy accent. Worse than the one on That 70s Show. [But] I was the first one speaking English in my family, [and the] first to get a high school diploma. To quote Mom and Dad, my only job was to get the education my parents never had.”

“I remember a very vivid memory when my mother, my sister and I would walk a couple of miles to the near 99 cent store,” Valderrama said, taking a long pause to gather his emotions. “And on our way back to the house, we would stop every couple of blocks [so] my mom could take a break, put the bags down. I would notice how red her hands would get from carrying the groceries. We did this a long time.”

Fighting back tears, the 37-old continued on. “One day we stopped at Red Oak and Vanowen, I looked at my mom and said, ‘One day we’re gonna drive.’ And one day, we did.”

“Here’s why that’s important,” Valderrama said. “My story is not any special or any different than any immigrant that comes to this country. My story literally mimics the millions of Latinos that come lay brick, and continue build the country we live in. Dreaming out loud is scary for this generation today. Our values, virtues, and our cultures are being attacked by telling us we don’t belong in a place that was built by immigrants. Every single one of us in this room is an immigrant.  And today, more than ever, we need to reinforce the spirit of what this country is about. It’s the land of opportunity. I am truly living the American dream, and all of us in this backyard today, are living a version of it, too.”

The line of people waiting to go inside the Alex Theatre in Glendale, where the RuPaul’s Drag Race Season 9 finale was being taped, was seemingly endless, and impossible to miss. Fans proudly rocked heels that were a minimum 5 inches tall, sparkly gowns, tutus around their necks, basically whatever outfit he or she felt was fabulous enough to wear to the Super Bowl of drag, and walking by felt like following the yellow drag road to RuPaul City.

Bob the Drag Queen was the emcee for the live event and she came out purse first to a thunderous applause. The Season 8 winner had the tedious job of orchestrating the pre-taped audience reactions for B-roll footage, however, I’d bet good money that such tape will never be used. The shouts, screams, and gasps once the show finally kicked off were loud, proud and infectious. I wished that I could’ve watched every single episode of Drag Race with this crowd.

Save for the crowning of the America’s Next Drag Superstar, nothing topped the moment RuPaul first appeared on stage. The standing ovation RuPaul received while people screamed “Woo!” and “Yassss, kween!” from every direction, it was as if someone turned up the bass up to max. I actually felt the theatre rumble.

I wish I could reveal more details, but I signed my life away to VH1 and World of Wonder. I’m pretty sure the NDA said that I would be assassinated if I gave away any spoilers. Now, I’m not a religious person but I do believe there’s a special place in hell for people that ruin TV for others. Of course, I’m dying to discuss which queen had the best runway look, the clear audience favorite, or which Top Four contestant came out looking like she hadn’t eaten in five weeks, but I can’t. And I honestly don’t know who wins. RuPaul filmed multiple endings so no one at the taping could even try to spoil it.

A week later, while attending the series’ Emmys For Your Consideration Launch Party in West Hollywood, I asked Mama Ru about her favorite moment from Season 9. Naturally, we began discussing the crew makeover episode.

“That was amazing,” RuPaul gushed. “These are guys I have worked with for years and years and years. They are brilliant. And just being in the room with these queens, they get it. They understand what it’s all about. That was a beautiful episode.”

In regards to the finale, Ru was just as excited as the show’s fans for it air on Friday (June 16).

”Oh, my God,” RuPaul said. “You’re gonna flip. It is so good. We changed the format up. All thrills no frills. A littler filler. But no frills.”

I wondered if RuPaul was nervous about stepping the series up come Season 10, as reaching the big 1-0 seems like such monumental achievement.

“We don’t think of it that way,” RuPaul said. “We are gay! So, we have so much creativity. You should see what’s happening in the writer’s and producer’s room.”

Ru’s relaxed confidence in Drag Race was refreshing. “Over the years, the audience relates with surmounting the impossible dream,” Ru explained. “I think that’s why people love it so much. These are queens that have prospered outside of society, against all odds, and that’s really why the show is a success.”

Plus, by continuously casting and featuring the most out-of-the box, fashion forward drag visionaries, the show will organically shift to remain relevant with the times. I mean, if it ain’t broke, why fix it? Sashay, you stay Drag Race! 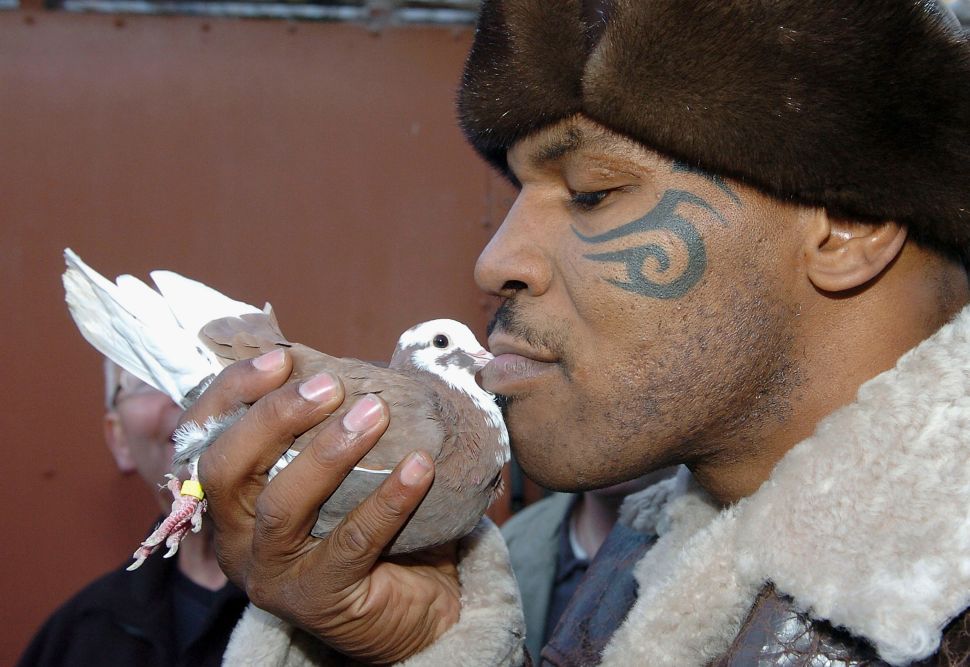