“Yes,” says Christopher Straka, sommelier and manager of Hearth & Dram in Denver, CO. “Try those fried pig ears with a Moroccan spiced dip paired with Rye whiskey. If you prefer Bourbon, then fry up some bacon and get ready to party. Honestly, bacon goes with all whiskey—you can never go wrong with this pairing—it’s to die for.”

If you love chocolate, Straka recommends high quality dark chocolate (65-72% cocoa) and great Islay Scotch. “Yes, that’s the Scotch that you don’t like because it tastes like you’re licking a campfire,” he says. “But when paired, the chocolate mellows the heavy smoke flavors and brings out a hidden complexity.”

Anthony Rossi, sommelier of Chicago’s Enolo Wine Café, suggests Madeira, a high alcohol dessert wine, paired with Halloween candy—like Snickers bars and Reese’s Peanut Butter Cups. “Anything with chocolate and peanuts is a nice match for the sweet and salty flavors of the wine,” says Rossi.

According to Roman Tartakovsky, Beverage Manager at New York City’s North River Landing, the most interesting and satisfying pairing is Dom Perignon Champagne and Cheetos. “It sounds crazy and totally off, but the sharp acidity of the champagne complements the salt, cheese flavoring, and fat,” says Tartakovsky. “Then you have the bubbles rushing around the palate, scrubbing away the little remnants so you can get back to that bag for another handful.”

Jeret Pena, creator of the bar program for Sea Salt in downtown Nashville, Tenn., loves pickles paired with tequila. “Smooth tequila can be vegetal or sweet… and beautifully complements the sour crunch of the pickles,” he says. Fried pickles are Pena’s top choice for the pairing.

“Channel your inner kid-self, while simultaneously celebrating the old (wo)man in you.”  Justin Anthony, owner of True Story Brands.

“Don’t knock it ‘til you try it—the mantra for anyone who’s enjoyed ostrich before. Unusual on American menus, but best tasted at a South African spot, pairing even better with a red than you’d expect.” Justin Anthony

“The rich, slightly gamey ostrich sliders are surprisingly, nicely complemented by the tropical spin on a classic. Switch out your beef for ostrich, and bourbon for rum!”  Justin Anthony

“It might seem obvious, but most people would be hesitant to pair the two together and think they need to go with a wine. Think again.” Justin Anthony

“How about Stout and vanilla ice cream—a root beer float?”

Ester’s curry cashews with Riesling: “Snacks can have wine pairings, too.” 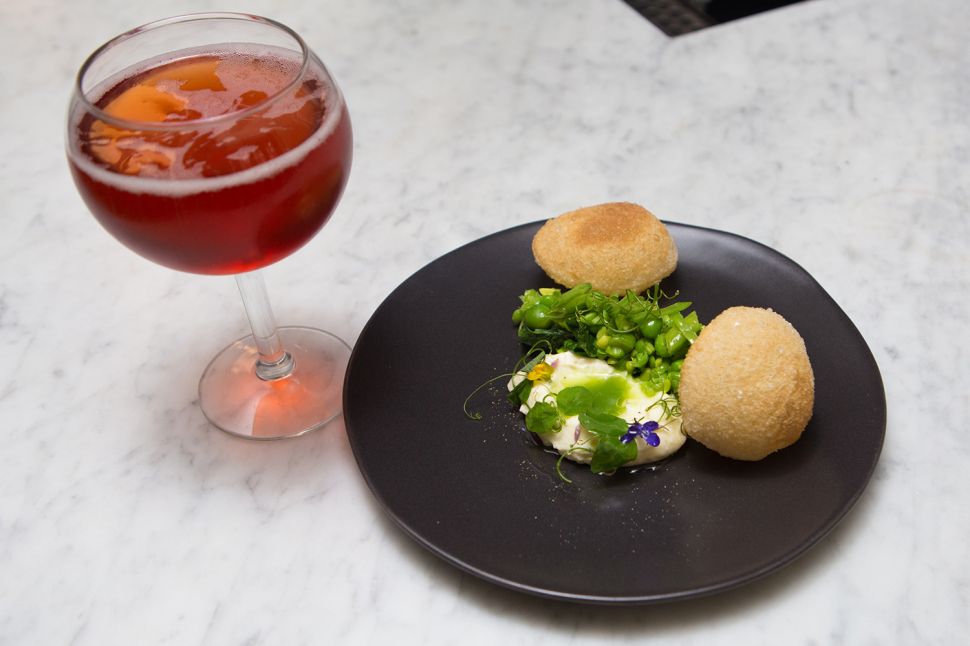