For the last 24 years, the International Criminal Tribunal for the former Yugoslavia, based in The Hague, has attempted to mete out justice to those accused of war crimes in the ugly conflicts which engulfed Southeastern Europe from 1991 to 1999. The track record of this UN-mandated court, termed the ICTY for short (said as ick-tee by Balkan cognoscienti) can be fairly assessed as mixed.

It’s put some certified bad guys behind bars—most infamously Slobodan Milošević, Serbia’s longtime president and the preeminent architect of the Balkan nightmares of the 1990s, who died in ICTY custody in 2006 before his trial was completed—but there have been plenty of missteps, too. Back in 2012-13, several prominent Balkan war criminals who had been convicted by the ICTY after extended and expensive trials were released on appeal, leading to awkward questions about the tribunal’s practical effectiveness.

The court has faced doubters from the start. Some suspect the ICTY’s less-than-even-handed justice is merely keeping political wounds open, rather than promoting much-needed healing in the lands of the former Yugoslavia, which remain politically traumatized by Communism’s collapse and the unpleasant conflicts which followed in its wake. Although—full disclosure alert—I’ve aided the ICTY as an expert witness in more than one case, I’ve been a skeptic too. A South African-style Truth and Reconciliation model might have served the Balkans better than justice imported by outsiders.

The problem seemed to be resolving itself, however, as the ICTY was slated to shut its doors imminently since it had few cases left to try. By late last year, there was only one upcoming trial on the books—that of Ratko Mladić, the infamous commander of the Bosnian Serb military during that country’s brutal 1992-95 war.

The tribunal has been given new life, though, by a sensational trial slated to start this week which aims to prosecute two of the most sinister and shadowy of all the Balkan warlords who perpetrated crimes back in the 1990s. They are Jovica Stanišić and Franko Simatović, who a quarter-century ago were top officers of Serbia’s secret police. As such, they oversaw secret units of commandos and criminals who murdered and plundered their way across Croatia and Bosnia in the first half of the 1990s at Belgrade’s behest.

Stanišić and Simatović have spent the last decade-plus in and out of jail. Initially indicted by the ICTY back in 2003, they were sent to The Hague to face a raft of charges, including murder. Their trial didn’t start until 2009 and it lasted four long years until, at the end of May 2013, they were found not guilty of all charges when the court determined that their responsibility for the crimes committed by Serbian special units had not been proven beyond a reasonable doubt.

This surprise verdict stunned the Balkans and increased doubts about the ICTY’s value as an instrument of justice. Relief in certain quarters—there was appreciation in Belgrade, which has always viewed the ICTY as biased against them, that finally some prominent Serbs walked free—was outweighed by nagging questions. Above all, if Stanišić and Simatović couldn’t be found guilty, who could be? It was a fair question, given their sinister role behind myriad war crimes.

Both men were career officers of Communist Yugoslavia’s secret police, the notorious UDBA. Although Marshal Tito and his renegade Red regime got good Western press during the Cold War, when Yugoslavia was valued by NATO for its usefulness in blunting Soviet aims in Southern Europe, UDBA was every bit as unpleasant as the KGB.

Indeed, Yugoslav spies were in many ways even nastier than their Soviet counterparts during the Cold War. When the KGB got out of the assassination business abroad in the late 1950s—what Kremlin spies termed “wetwork”—because the associated political risks were too great, UDBA went into that sinister field with gusto.

Between the mid-1960s and the collapse of Yugoslavia a quarter-century later, UDBA assassinated about a hundred Yugoslav émigrés in the West. Most of these hits took place in Western Europe, but they spanned the globe, including a dozen assassinations in the United States (none of which were ever prosecuted). Western intelligence services, including American ones, averted eyes to this unpleasantness since Tito was strategically useful in the Cold War.

In a nasty innovation, UDBA outsourced much of its wetwork to Balkan mafiosi, who were skilled at murder and were perfectly content to kill for Belgrade in exchange for leniency about other crimes. Tito’s secret police thereby created cadres of career criminals experienced in state-sanctioned murder—a development which would have fateful consequences when the country fell apart a decade after Tito’s death in 1980.

In the months before Yugoslavia finally came apart at the seams in the summer of 1991, Milošević employed Serbia’s secret police to arm ethnic kin in Croatia and Bosnia in preparation for rebellion and war. That work was overseen by Stanišić and Simatović, who created a hush-hush program termed the “military line” to raise paramilitaries under UDBA auspices for the coming wars which Serbia was egging on.

Known as The Iceman (for his preternaturally cool demeanor) and Frankie, respectively, in Serbian intelligence and organized crime circles—the line between them, blurry under Tito, disappeared altogether under Milošević—Stanišić and Simatović raised a covert army of criminals to do Belgade’s dirty work. The former was the head of Serbia’s powerful secret police from 1991 to 1998 while the latter was his factotum, especially for war and wetwork.

Together they raised linked paramilitaries like the Special Operations Unit (the JSO, informally called the Red Berets) and the Serbian Volunteer Guard, led by the charismatic Željko Ražnatović, who went by the underworld nickname Arkan (Wildcat). Many of the recruits were veteran criminals, including Arkan, who was a legendary UDBA assassin responsible for hits across Europe in the 1970s and 1980s.

Beginning in mid-1991, Arkan and his Tigers, as he called his bandit brigade, along with the JSO and associated paramilitaries, a few thousand men in all, commenced a four-year spree of theft, plunder, and murder across Croatia and Bosnia. Although it was politic to pretend that these criminals were freebooters, it was understood by anyone who wanted to that they answered to Belgrade—which meant they belonged to Frankie and The Iceman. Western intelligence agencies in the 1990s were fully aware of the key role played by Stanišić and Simatović in raising, training, equipping, and operating secret units of Serbian criminals who committed war crimes across much of the former Yugoslavia.

It all came crashing down at the end of the 1990s. By daring NATO to act when he cracked down on Kosovo in 1998, Milošević became the architect of his own undoing. Stanišić cautioned his boss, knowing he was forging a road to ruin, and left the secret police before NATO bombed Serbia for 78 days in the spring of 1999. Defeated in war, the ailing Milošević regime held on for another year, finally succumbing to popular protests in October 2000.

By that point, many of the most-wanted war criminals were already conveniently dead. In a series of bloody mafia wars in the last years of Milošević’s rule, dozens of Serbian mobsters and security officials were murdered under mysterious circumstances. A prominent victim was the flamboyant Arkan, who was gunned down in a Belgrade hotel at the beginning of 2000. The regime was ensuring that big fish weren’t alive to testify against Milošević and his henchmen in The Hague.

The wily Stanišić and Simatović avoided a similar fate, only to be arrested in the aftermath of the March 2003 assassination of Zoran Djindjić, Serbia’s reform-minded prime minister, who wanted to purge the country of state crime. His assassins, who gunned their quarry down in broad daylight, were top officials of the JSO, which led to a long-overdue crackdown on the deeply linked spies and criminals who did so much of Belgrade’s dirty work in the 1990s.

The trial set to begin this week, therefore, may reveal unpleasant truths about the criminal nature of Communist Yugoslavia and the even more unpleasant regime which took its place in Belgrade under Slobodan Milošević. Certainly, Frankie and The Iceman have quite a story to tell, if they can be coaxed into telling it, since they know where all the Balkan bodies are buried – literally as well as figuratively.

There’s a rub here for the United States, however. As I’ve tried to get across for years, in articles, documentaries, and books, the real story of the Balkan wars of the 1990s is a lot murkier than  the standard accounts would have you believe. Western governments were aware of many unpleasant events which they did little, if anything to stop, while American involvement in messy Balkan affairs was deeper than the public realized.

One of the facts which may complicate the new trial is Jovica Stanišić’s longtime relationship with American intelligence. Throughout the 1990s, when he headed Serbia’s sinister secret police, The Iceman was an agent of the CIA, as Langley has admitted. His CIA case officer maintains that having such a valuable back-channel to the very top security circles in Belgrade “did a whole lot of good” at preventing ugly Balkan wars from getting even worse. That may be true, but one hardly need be a congenital skeptic to have questions about what Washington knew about war crimes as they happened in something like real time, orchestrated by The Iceman’s subordinates.

Surely Stanišić and Simatović, veteran spymasters, are thinking of angles to play in their coming retrial. They’re hardly young men—both are 67—and if they don’t want to spend the rest of their days in a Dutch prison cell they need to ensure that heir second trial ends as the first did. That’s a prospect which ought to cause concern in several Western capitals, Washington included, since Frankie and The Iceman are the last survivors of the secret cabal which pushed the Balkans into wars and mass murder a generation ago. 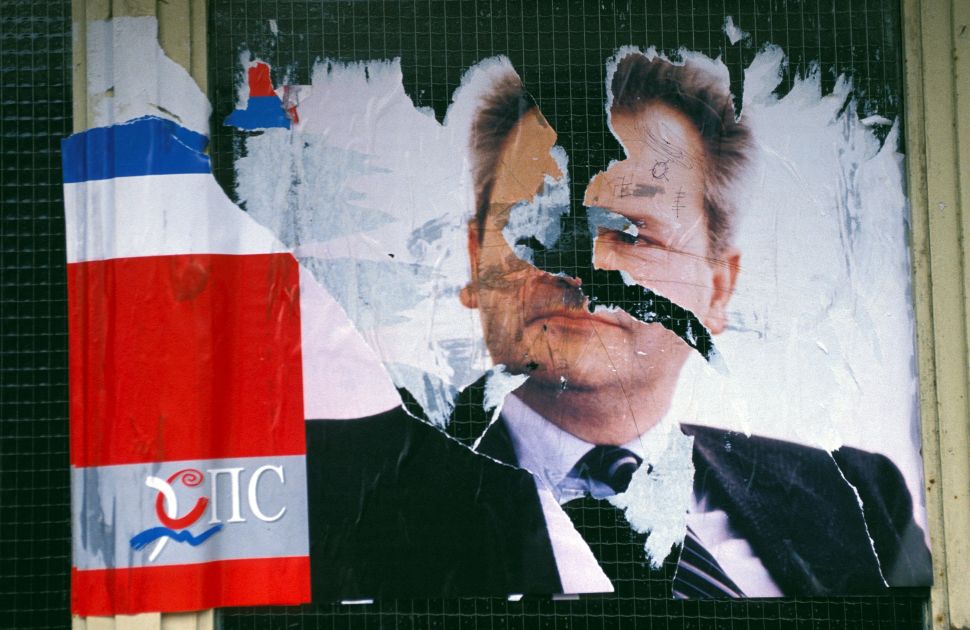