Gene Simmons is well known for his role as bassist and one of the lead singers of KISS. If it was up to him, though, he’d be more than that: he’d be the trademark holder for what is probably one of the most common hand gestures in the world.

On Friday, June 9th, Simmons filed a trademark application for “a hand gesture with the index and small fingers extended upward and the thumb extended perpendicular.” That is, he wants to trademark the hand signal often referred to as something like “the rock on symbol.”

For comic book fans, such a hand sign may ring a bell. The gesture Gene Simmons wants to trademark is the very same gesture that Spiderman makes to shoot his webs.

Spiderman was introduced to the world in 1962, and appears to have been using the hand sign in question since his inception or shortly thereafter. In his application, Simmons claims that he first used the gesture for commerce in November of 1974, at least a decade after Spiderman would have.

The gesture bears strong resemblance to the “sign of the horns”, a gesture in which the index and pinky fingers are extended upward but the thumb is used to hold down the middle and ring fingers. The difference is the thumb: in Simmons’ trademark application and the accompanying drawing and photograph (a surprisingly low-res image of Simmons and what looks to be Dave Grohl), the thumb extends outward instead of folding towards the palm.

The sign of the horns, aside from being a gesture more than a thousand years old, is a common sight in the rock and roll community. Simmons’ thumb-out gesture is popular too, though. Even celebrity chef/human meme Guy Fieri is often spotted throwing up the gesture in question.

Eriq Gardner, writing for the legal blog of the Hollywood Reporter, notes that the cover of a 1966 Beatles single features John Lennon holding up his hand, among his bandmates, with his index finger and pinky extended, thumb out, and middle and ring fingers folded down.

While Gene Simmons certainly does it a lot, it is highly unlikely that this hand gesture will receive trademark protection from the US Patent and Trademark Office. Although it may be possible that the gesture be considered a “symbol… used to identify and distinguish the goods/services of one seller or provider from those of others”, which the office considers eligible for trademark protection, there is a significant chance that the gesture will be considered generic, and that the odds of someone confusing another artist for Gene Simmons based on a hand gesture are awfully low. 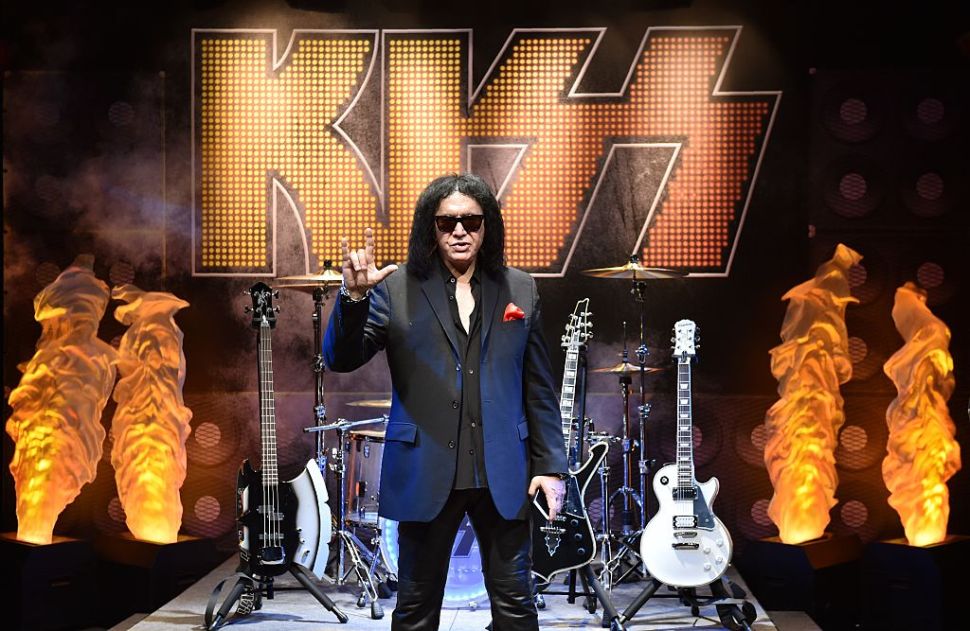