It’s the fifth and final season of Orphan Black and for Clone Club members everywhere, it’s been an exciting, yet bittersweet experience. There’s been a lot of ups and downs for every character involved in Graeme Manson and John Fawcett’s story — and, honestly, the BBC America show has evolved into one complex piece of storytelling.

Aside from the brilliance of Tatiana Maslany’s Emmy Award-winning performance as Sarah, Beth, Helena, Rachel, M.K., Alison, etc., it’s worth acknowledging the other characters and how their stories have played out thus far. Art is going through some struggles, Kira (Skyler Wexler) has left her mother to find answers, Helena’s unborn babies are apparently superhuman, Cosima may be crossing over to the dark side and Donnie (Kristian Bruun) … well, Donnie’s just trying to be a good husband.

Saturday’s (June 24) episode, titled “Beneath Her Heart,” takes a trip back before all the clone craziness began to give a deeper look into the bond between Donnie and Alison Hendrix. They’ve been through a lot through a short period of time, and even though the ongoing story in the suburbs have provided some hilarious fodder, previously, it feels that the show has begun to tie up loose ends — leaving many to wonder if this is the curtain call on Donnie and Alison’s tale.

To get further insight, I spoke with Kristian Bruun about the emotional experience of saying goodbye to Donnie after five years. Here, he discusses the importance of genre television as a medium to tell relevant and important stories. And gives a tease as to where the Orphan Black story will go. Will we see Donnie and Helena again? It’s very possible.

Alison and Donnie’s story really came full circle in Episode 3. How was that experience shooting this, exploring just how far the Hendrixes have come?

For us, it was really special to film this episode because we got to look into the past at their life before all the craziness happened, before Ainsley died. I think that was really important, to sort of show how they just had a regular marriage. Obviously, Donnie was a monitor back then even, as we learn in Season 2 — I mean, he was kind of an unwitting monitor because he thought he was doing something quite benign. But, you know, they are a good solid couple and they’ve survived through so much stuff they probably would never have predicted … both with the drugs and murder … that whole thing …

The suburbs are a dangerous place.

You know, I think an episode like this just shows you that, listen, they’re good. They’re solid. They’re going through some stuff. They’re going through a lot of shit right now, let’s be honest. Alison is questioning what’s going on in her life — all the madness. I mean, the show has really only taken place over like six months or a little bit longer. I think maybe it’s been like a year or something like that. Helena is getting quite pregnant and that happened, obviously, seven or eight months ago. But as we track through the nature of the show, all of this change has happened in a relatively short span of time. Everybody’s relationship on this show has gone through so much. So when you put it through that perspective of a timeline, you’re like, Oh my god! How are these people staying together? How are they not falling apart?

So, it was really important to go back in time and show what it is they missed — that idea of safety and family and normalcy — and then, to also be jumping back and forth to the kind of craziness that their life is now. And it does really give you a kind of perspective as to how solid they are. Even at the end of the episode, Allison’s like, “I need to go away and sort some shit out.” And Donnie’s like, “Okay. You do that and I’ll be here when you come back.” That’s a really loving, trusting thing for a partner to do and I think it was really important for the audience to see that.

Let’s talk about that scene. There was a very finalized feel to it. It’s almost like we’re saying goodbye to Alison and Donnie for good. What was it look shooting that? Were those emotions real?

I remember filming that scene, the “Ain’t No Mountain High Enough” scene, and first of all, that’s one of my favorite songs in the world. I love that song, but it just sets me off everytime I hear it. It’s such a beautiful song with a great message. It’s a great song for couples and when we were filming it, we were just so emotional — probably too emotional. There were some takes where we were just messes. There was definitely an element of us sensing the end of the whole show and sensing the end of this crazy ride that has been Alison and Donnie.

I remember filming that and just looking at Tat and both of us feeling like, Oh my God. This is all about to be ending. I almost feel like that was more emotional than when we finished filming. When we finished filming, we were just kind of numb. But that scene just felt so final and bizarre for the couple. I just found it extremely emotional but it was also nice to have that moment.

There are just seven episodes left — is this the last time we’ll be seeing Alison and Donnie in the story?

I will say there is a break while Alison is off, you know, doing her thing … We do have a long break where the suburbs aren’t even playing. There’s other more pressing things at hand. You’re not going to see us for a while and I hope people don’t forget about us. But, you know …  Like Donnie, the audience is going to feel that Alison is a bit out of the picture. It certainly feels final, but it’s not the end.

Shifting gears, here, I must say it was a pleasant surprise to see you pop up in The Handmaid’s Tale on Hulu.

It was an honor to be a part of that show. I mean Margaret Atwood is one of our literary gods up here in Canada. So, just to be a part of this in any way was incredible. I feel like that scene with the doctor and Offred — Elisabeth Moss’s character — it stands out. It’s a very disturbing scene and they wanted me to play it as sympathetic as possible, because the situation itself is so bloody sinister. You can come in and play an evil doctor and obviously, she would say no. But the more sympathetic that the doctor is in his intentions toward Offred, the more of a difficult decision it is on her end to potentially save her own life.

Orphan Black and The Handmaid’s Tale — they feel like completely different shows, yet they both explore many of the same issues: Women’s rights, reproductive rights, eugenics, politics …
I would argue that these two shows are more companion pieces than any other two shows out there right now. Handmaid’s Tale is also science fiction. It takes place in the future. There is something that has affected mankind, humankind, in such a horrible way. And somehow society has gone in this crazy direction. I think both shows are obviously feminist and are very relevant and of the times. They are a warning for the future — of how we treat our own bodies, women’s bodies and, poses the question, Who has the rights to our bodies?

If we want to get political, we can look at things the U.S. government is doing to change legislation to hinder women’s rights. The healthcare system is such a mess right now. These two shows are warning pieces, in their own ways, as to … Let’s not head down this path, let’s keep the dialog open, let’s keep rights open and let’s just try and exist in a way that’s respectful of everybody. It’s a very simple message when you put it that way and both these shows are very complicated. But, I think if there’s any way that we can use entertainment and the medium of television to get a message as simple as that — and as complex, as well — out to people, without hitting them over the head with it, but just somehow try and register some feeling in their gut so they sit and think about that, even for a minute after watching an episode, then we’ve done our job. It’s nice to do something that’s got layers and is relevant and is important.

Did you ever think a show like Orphan Black would be so relevant and important? This is a sci-fi show about clones, after all!

We never realized things would go down this path when we started doing the show five years ago! It was a very different world five years ago, politically, in the United States. Plus, the world has changed a lot. The show has become surprisingly relevant as the seasons have gone along. It’s just amazing to watch people’s reactions to the show and, I said it before in an interview, but if we can take someone’s opinion that may not be the same as the show’s, and maybe just show them another perspective, and another side of things, and get them to sort of question how the world is headed right now — then, that’s the first step in making a difference. I hope that both those shows do just that.

Orphan Black airs Saturdays at 10 p.m. ET/PT on BBC America. Season 1 of The Handmaid’s Tale is available to stream, in its entirety, on Hulu. 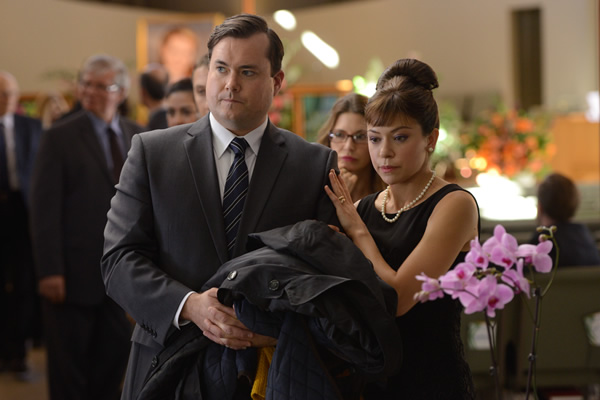