It seems like everywhere you look these days, every link you click, every photo that’s posted, all serve as reminders that you don’t have enough, and therefore, you are not enough. Keeping up with the Jones’ is nothing new, but the societal effects of this approach to life seem to have intensified and accelerated over the decades, particularly with social media. Here’s the story of how I came to focus on appreciation over accumulation.

In 2009, I was waiting tables, not exactly killing it financially, but one night I remember in particular that a couple sat down in my section and the woman got a baked potato as her entree. I thought to myself “Damn, at least I’m not that broke.” We take pride not just in what we have, then, but in how it compares to other people.

The next morning my smug satisfaction was rudely interrupted when I woke up to a text notification from my bank. My balance of $0.00 was lower than what I agreed I would keep in there. My years of living as a quasi adult (it’s when you have bills and responsibilities but you’re still kind of an idiot) had caught up to me. I was broke. I was worse than baked-potato-broke.

I’m not going to sell you some story of radical transformation or how I realized that being poor was awesome. It isn’t. But this moment was life changing for me. I found myself a few days later on the treadmill at the gym, literally and figuratively, repeating to myself over and over again “I need more money. I need to make more money, like right now. I’m not going to make it out here, I need more money.” I did need money but it also occurred to me then how ridiculous it was that I thought money would solve all my problems. That I would suddenly be happy if I was successful, that if I could just come up with some plan to throw myself into, all would be well. In short, money only solves one problem; the money problem. There were at least 5 other cylinders I needed to be firing on if I wished to have a successful and fulfilling life.

What I did do was start writing things down (which costs nothing). Every time a valuable thought popped into my head, and I thought it could benefit someone else (or me later when I forgot it) I wrote it down. I can say with absolute surety that there wasn’t one thought that popped into my head that I didn’t jot down in my phone for the better part of ten years. And I did begin to turn my life around. I got back on my feet financially, married the woman of my dreams, competed in a bodybuilding show, had kids, bought a house, and built up a social presence where I reach over 1 million followers every day. It turns out that self esteem doesn’t come from having a lot of money. Instead, developing high self esteem can help you earn more, because you start to feel like a person that deserves to be financially secure. You put in the work, why wouldn’t you reap the reward?

It is my mission now to share those thoughts I believe are indispensable for anyone trying to cultivate a more positive outlook in a time when overwhelming negativity seems to be rewarded, both with attention and money.

Greed tells you you’ll never have enough even though you already have more than you’ll ever need. I’m not saying money is bad, and I can’t stand when people say that money is the root of all evil. Money is nice to have and at the very least, it gives you more options. What I am saying though when I say “happy is the new rich” is that nothing outside of you should determine how you feel about yourself inside. Not the number in the bank account, not the number on the scale, not your number of followers, etc. I’ve known plenty of broke people that were very happy, and I’ve known plenty of people with more money than they knew what to do with who were miserable. I’ve had the time of my life laughing on a beach with a bottle of , but I also know a man who bled to death on marble floors in a swanky New York apartment after drinking vodka for 3 weeks straight. Money is definitely necessary, but a sponge can only hold so much . After a certain financial saturation point, more money doesn’t equal more happiness. If you look at Maslow’s Hierarchy of Needs, you only need money for the bottom row.

Thought without action creates anxiety. Make thought and action equal partners while cutting talk completely out of the deal.”

If you look around, you see a whole lot of people telling you what they’re going to do, while not doing much of anything. People don’t have a motivation problem. They have a follow through problem. It’s easy to get all jacked up on the thought of doing something good for yourself, but if you’re not careful, you’ll get too much satisfaction from the dopamine hit you get when you tell yourself you’re going to the gym, and you’ll never actually make it there.

This is something I used to hear my old friend Jack say all the time, and people get the meaning messed up quite often. The way I took it is this; God is not a painkiller, because pain equals growth, and God is not a growth killer. There are plenty of painkillers out there that will temporarily relieve your discomfort, but as long as you rely on them to cope with tragedy or triumph, you’ll never fully go inside for the answers, and thus the growth, you’re looking for. If you’re using vices or void filling behaviors to deal with your problems, you’ll find yourself in deep trouble sooner than later. I always think of the plant from The Rocky Horror Picture show. It starts off all cute in the beginning, but as he feeds it more and more, it grows bigger and bigger, hence it needs to eat more and more until it totally runs his life. The same thing happens when you feed the void. Starve the void, feel the pain, get the lesson, and move on.

I wrote this after a friend of mine committed suicide. I’ve heard suicide referred to as a permanent solution to a temporary problem. The thing is though, when you’re clinically depressed, it doesn’t feel temporary, and it seems the only way out is through the other side. I’m not claiming to have the cure to suicide, but it did occur to me that it would be silly to get a tattoo to cover up a bruise.

5. “Marriage is not the end of the search for love.”

It’s the end of the search for the person to love. The search for different ways to love that person has just begun.”

So many people see marriage as the end of the good life, as if meeting strangers off the internet based on location is such a treat. Like any muscle though, love has to be built up, and taken care of. It used to be that your friends gave you a hard time when you tried to leave your spouse, now they give you a hard time if you try to stay with them. In the age of disposable everything, it’s even harder to work at a relationship. I try not to take or give marital advice, but there was one piece of advice that I was given that I give to anybody who will listen, and that is “Don’t punish your spouse.” If your spouse left a candle burning and went to bed, what would you do? Would you blow it out or go wake them up and ask them why they were trying to murder the entire family? Yeah, I used to do the latter. Just blow it out.

6. “Lust makes you pretend problems don’t exist, love lets you accept that they do.”

Lust is one of the most powerful drugs in the world. I’ve seen many people paint red flags green for the sake of satisfying the most carnal urge. No doubt, we were programmed to pass down our genes and keep the human race alive, sometimes at our own peril, but I’ve disregarded some pretty gnarly warning signs of my own in my dating years, and I’ve seen others do the same.  My wife is not a perfect person, but she tries hard to be better every day, and so do I. My love for her allows me to accept her defects, knowing that she’s aware of them and working on them. Me pointing her flaws out to her over and over again does absolutely nothing (except start a fight). She’s doing the best she can with the tools she has. If i really want to help her, i can try and give her new tools.

The two questions I get asked the most are “How do I get in shape?” and “How do I build my Instagram account?” and my answer is always the same, start now and don’t stop until you’re satisfied. Then enjoy that phase for a little bit, and get back to work. There is no substitute for consistency. No program you can buy and no cream you can rub on your body to make up for decades of neglect. The majority of people today are like kids furiously brushing their teeth before dentist appointments, trying to make up for months, or years, of neglect. Start, don’t stop, and then keep going. Perfectionism is knowing something isn’t going to be good enough before you’ve even begun, and procrastination is putting off starting because you know it isn’t going to be good enough. They’re both paralyzing, and they can both be cured by one thing; action. Get. Going. Now.

George Resch is the author of Happy Is The New Rich (and 207 other lightbulb moments), which is a book full of bite sized inspiration, introspection, and humor gleaned from thousands of notes he took while journaling over the course of 10 years. You can buy it here: Happy Is The New Rich on Amazon. You can also find George on Instagram (where he spends most of his time on the internet): @tank.sinatra 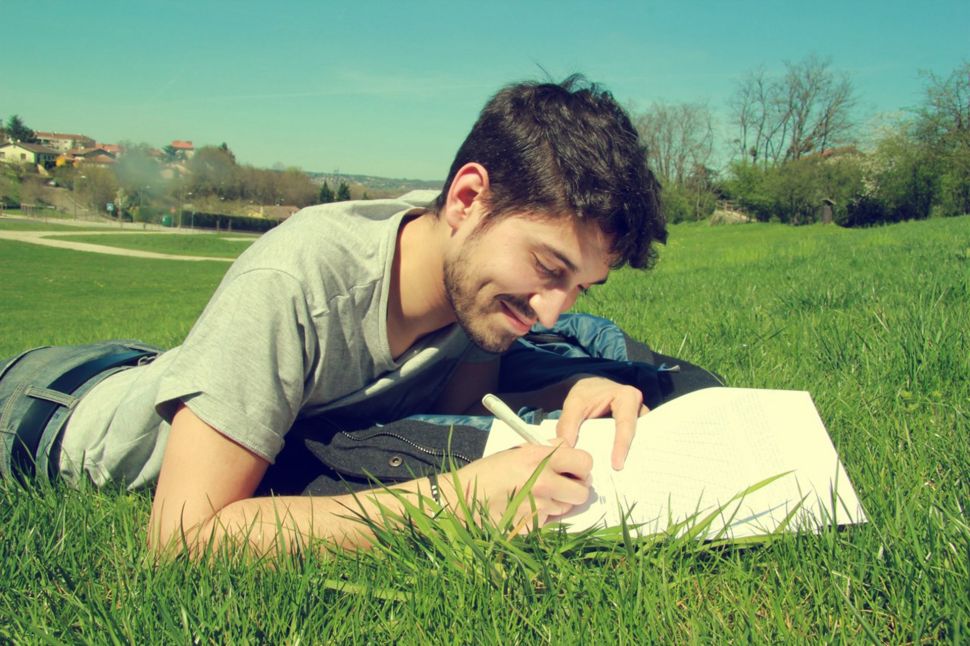