During the annual Pride celebrations, gay, trans and other queer folks want nothing more than to be happy, spread awareness and celebrate being alive despite the ongoing discrimination and violence LGBTQ people have faced throughout history. But for some reason, this is an issue for some heterosexual people who feel excluded and personally offended.

We saw this over the weekend in a tone-deaf Abercrombie & Fitch tweet that said “the pride community is everybody, not just LGBTQ people.” And now we’re seeing it again in the form of a viral tweet from a guy who’s being dragged all over Twitter for celebrating his “heterosexual pride.”

Someone with the Twitter name Connor Michael—whose bio reads “Jesus is my Lord and Savior” and says he’s running for president in 2036—tweeted out a photo of him kissing who appears to be his girlfriend in order to “let everyone know how straight [he] is.” He even used the #PrideMonth hashtag.

Because it's #PrideMonth I would like to express my heterosexual pride and let everyone know just how straight I am. pic.twitter.com/4FL1al60KY

Some people have attempted to explain to Michael why it’s important to let the LGBTQ community celebrate this month and why it isn’t about him, but most of the reactions have been brutal. People called it “disrespectful” and “inconsiderate nonsense.” Some replied with pictures of themselves and their same-sex partners. Others sarcastically praised him for his courage standing up for everyone who has been killed for being straight.

when straight people can't figure out how to be involved in pride month even tho they get every single other month but this one pic.twitter.com/1Kq3AwD8dB

Get some manners, darling. Or brains. Whatever your gf thinks suits you best. pic.twitter.com/hz5GlO8We7

After the initial tweet blew up, Michael began quote-tweeting some of the replies. This did not help his case—he said his sexuality was being attacked, asked why there’s no month for straight people and even did some queersplaining (not sure if that’s a word, but it is now). He even pulled the classic bit about being “fine” with people being gay, but they shouldn’t show it off.

Well where's my month? I guess I'm just inferior to you because I'm heterosexual https://t.co/XfE8UaYBCR

Every month? Where is that written? But actually I'm a Christian and people of my faith are being attacked and killed https://t.co/VY2ecGqHXo

Listen. I'm fine with people who wanna be homosexual. But I don't see people who are straight being flamboyant about their sexuality https://t.co/mFkNojQIIs

You forgot the "Q+" https://t.co/jmCkxqDkHa 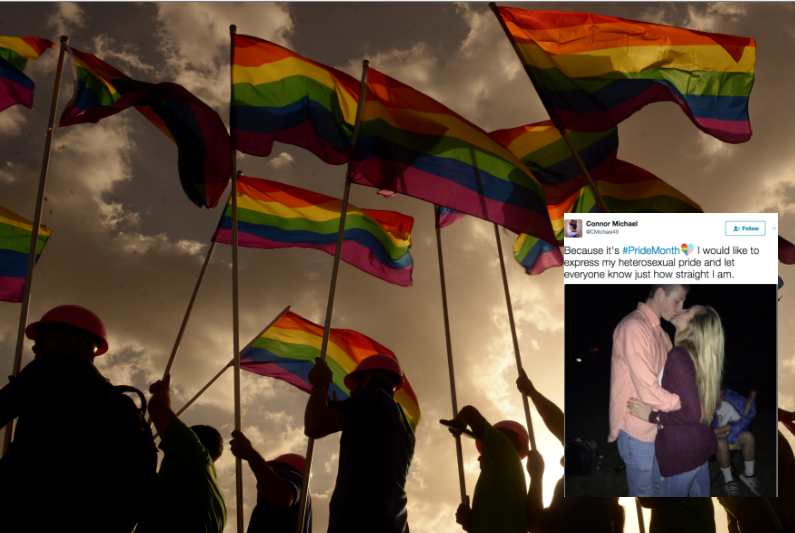