As much of the country watched former Federal Bureau of Investigation Director James Comey‘s testimony before the Senate Intelligence Committee, Hillary Clinton addressed the graduating class of Brooklyn’s Medgar Evers College—and though she repeatedly ripped President Donald Trump and his policies, she made no reference to the scandal that now threatens to engulf her former opponent’s administration.

Comey released a statement yesterday confirming reports that the president had arranged private meetings to demand his “loyalty,” and to request that his agency drop an investigation into former national security advisor Gen. Michael Flynn, who resigned in disgrace in February amid revelations he had lied to Vice President Mike Pence about his talks with Russian ambassador Sergey Kislyak. But rather than raise the specter of obstruction of justice charges, the ex-Secretary of State reserved her attacks from the podium at the Barclays Center for some of the president’s more controversial and racially-tinged initiatives, starting first with the president’s thus-far failed efforts to bar travel from a handful of majority-Muslim nations.

In her address, she described the personal journey of Yemeni immigrant student graduating today with honors.

“I’m certainly glad he wasn’t banned from America,” Clinton said, later tweaking Trump for recently referring to the visa moratorium as a “travel ban” on Twitter, even as his lawyers argued in court it was not. “Yes, it is a ban, as the president himself made very clear this week.”

She praised those New Yorkers who “flooded to the airports” in the aftermath of the first executive order blocking entry to individuals coming from lands in the Middle East and North Africa. She also highlighted the massive Women’s March that paralyzed Washington a day after Trump’s inauguration.

“It galvanized people. It helped change public opinion,” she said, urging those in attendance to get involved with the American Civil Liberties Union, the National Immigration Law Center and the National Association for the Advancement of Colored People.

Clinton recalled the legacy of the man for whom the school was named, a civil rights activist murdered by a member of the Ku Klux Klan in 1963. She warned of the rise of an “emboldened” white supremacist movement, exemplified in the deadly stabbing attack on a Portland commuter train last month.

The former first lady asserted that Trump was “undoing the progress we have made,” particularly by lending support to state voter identification laws with his new “Advisory Commission on Election Integrity.”

Supporters of such statutes assert that they prevent fraud at the polls—the kind Trump claims, without evidence, prevented him from capturing the popular vote in last November’s election. But opponents point to studies finding such chicanery is rare, and that the identification requirements discriminate against poor and minority voters, who are less likely to have a valid government credential.

“States and the federal government are introducing bills to try to make it harder to vote,” she said. “And now, and now, the Department of Justice itself is actively taking steps to support those state efforts: to make it more difficult for law-abiding citizens, especially black and poor or elderly or young, to cast their ballots.”

It was the only reference she made to the Department of Justice, which oversees the FBI and which is overseen by Attorney General Jeff Sessions. Sessions recused himself from the probe into collaboration between Kremlin hackers and the Trump campaign earlier this year, after reports surfaced that he had met twice with Kislyak during the election cycle, despite denying any such contacts during his Senate confirmation hearings.

It was Sessions who formally recommended terminating Comey’s employment at the bureau, citing his handling of the probe into Clinton’s use of a private email server while at the State Department. The former Democratic nominee and her supporters have blamed her loss on the ex-director’s decision to send a letter to Congress a week and a half before the election noting that his agents had uncovered material “pertinent” to that probe on a laptop belonging to Anthony Weiner.

Clinton did mention in her address today that she agreed to the appearance last year,  expecting to be “flown in from the White House.”

“Oh, I’ve had a few setbacks in my own life. And losing an election was pretty devastating, especially considering who I lost to,” she said.

The ex-candidate and Westchester resident also seem to take a jab at her critics on the left, who assailed her 2016 campaign for its emphasis on racial and gender issues rather than economic concerns.

“There will be some people who try to undermine you because of who you are,” she said. “And when they even try to dismiss your lived experiences—maybe they’ll call it ‘identity politics’—stand up and say that your identity is as important and valuable as the identity of anybody else who lives in the United States of America.”

“You embody what makes New York and America great already,” she continued. “Never let anyone silence your voices.” 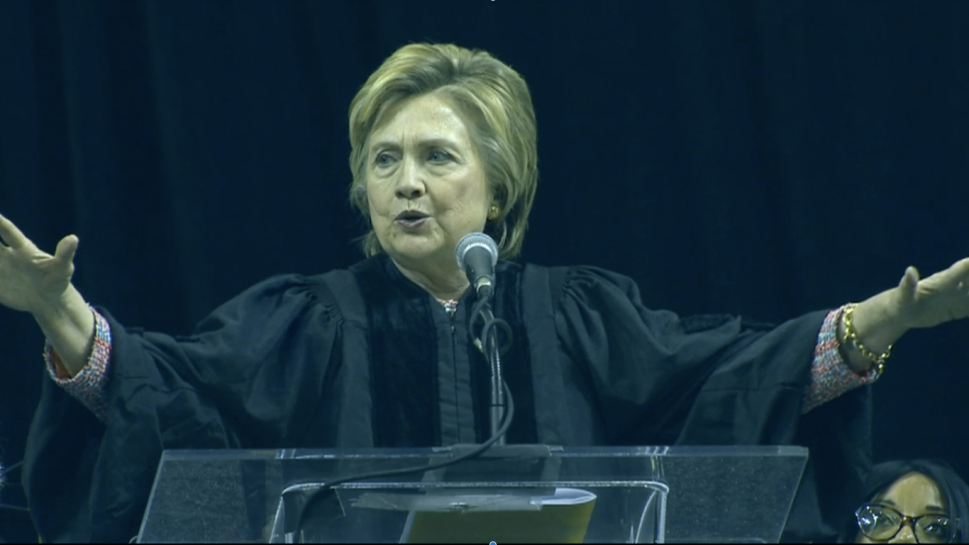