The latest season of House of Cards fell flat for me through no fault of its own, but rather due to Season 45 of flesh and blood America’s own presidential saga. And oh how both make me yearn for the relative earnest Sorkin simplicity of the West Wing.

Don’t get me wrong: Season 5 of this Netflix original is as thrilling, dark and titillating as earlier seasons. There are plenty of murders and almost murders of enemies, adversaries, and inconveniences both foreign and domestic. There’s plenty of sex and romance — or at least as close to romance as a pair of ruthless killers are capable of conjuring.

Loyal fans will find no vindication from the typical criticisms: the plotline and characters are still too crazy, at times too soapy, and certainly too influenced by the Russians.

But I was shocked by very little in the 13 action-packed episodes and found myself rolling my eyes at several points, especially during Frank Underwood’s now expected self-important soliloquies.

So why did it still leave me with nightmares?

In the Trump era, this show too glib and too predictable. The bearded President Petrov’s Antarctic interference can’t hold a candle to the very real Russian hacking scandals gripping our very real nation. A few protesters in front of the White House pale in comparison to the millions who took part in Women’s Marches across the world. FBI Agent Nathan Green’s quick Congressional testimony was nothing compared to FBI director James Comey’s ongoing trial by fire. And the Underwood’s constant manipulations of a few earnest journalists seem trite compared to our present alternative fact-fuelled informational chaos.

Eerily many of the high-brow critiques leveled against earlier (pre-Trump administration) seasons could just as easily have been said about our current commander in chief: Donald Trump “fancies [him]self a sophisticated critique of Washington. Instead, [he]’s a muddled and naive insult to our intelligence.” But are the two really anything alike?

Underwood doesn’t want anyone to like him, not even his own wife. Trump needs everyone to like him. Underwood is calculated; Trump is sloppy. Taking time off makes Underwood go crazy; Trump has Mar A Lago. Underwood believes “you’re remembered not for the winning, but because you never lost.” Trump has lost a lot.

Underwood’s soliloquies get a little absurd as the season progresses — but aren’t Trump’s always absurder? We’d boo an actor off the stage for of half the things that come out of his mouth as he’s scampering about the world stage.

In one key way, though, Underwood and Trump are the same: they’re both publicly venerated and privately reviled.

And what about the women of the show? The comparison between the Claire Underwood and Hillary Clinton would be too easy. In many ways, Claire is an anti-Hillary. Elegant and cold, she’s the one that messes around — and doesn’t get caught. Would we have found her calculated seduction so charming if her lover Tom were a woman and Claire a man? Secretary of State Catherine Durant is helpless, especially when tumbling down the stairs, but we must remember that she chose this path. And then there’s the wonderful polyglot powerbroker Jane Davis, flitting around making coffee and using the world’s most powerful men as her pawns. All three could star in an Underwood era version of SNL’s Complicit.

So where does that leave us? Claire Underwood, after murdering her extramarital lover mid-coitus, refuses to answer a phone call from her husband Frank. In the final moments of the season, she stares into the camera and declares, “my turn.”

It’s unclear whether House of Cards will return to Netflix for another season — but America will. Perhaps this show still stirs something within us because it gives us hope for ourselves: Claire and Frank have sealed their fates. Their nation has become a House of Lies, and there’s little any journalist, government official, or private citizen has been able to do to disinfect it with sunlight. But unlike Claire, or like the fictional United States, the American people seem to be waking up — or at least wanting to. Our nation is hurting just as much if not more so than the House of Cards one, though we’ve moved past shock to dread.

Perhaps it’s time for us to shrug off our own national encumbrances and say, “our turn.” But at least for the foreseeable future, I fear it’s Trump’s America– and we’re just trying to survive it.

Laura E. Adkins is an editor at the Forward. 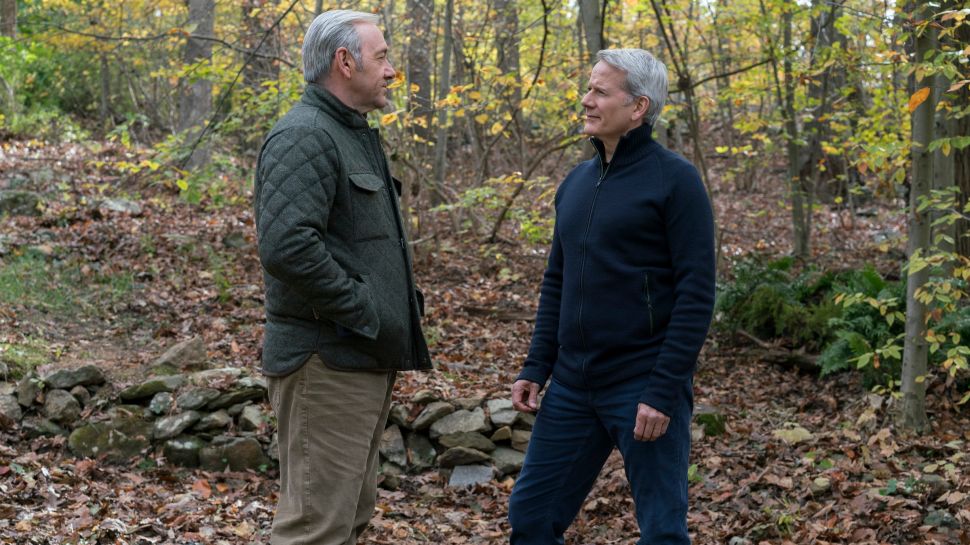