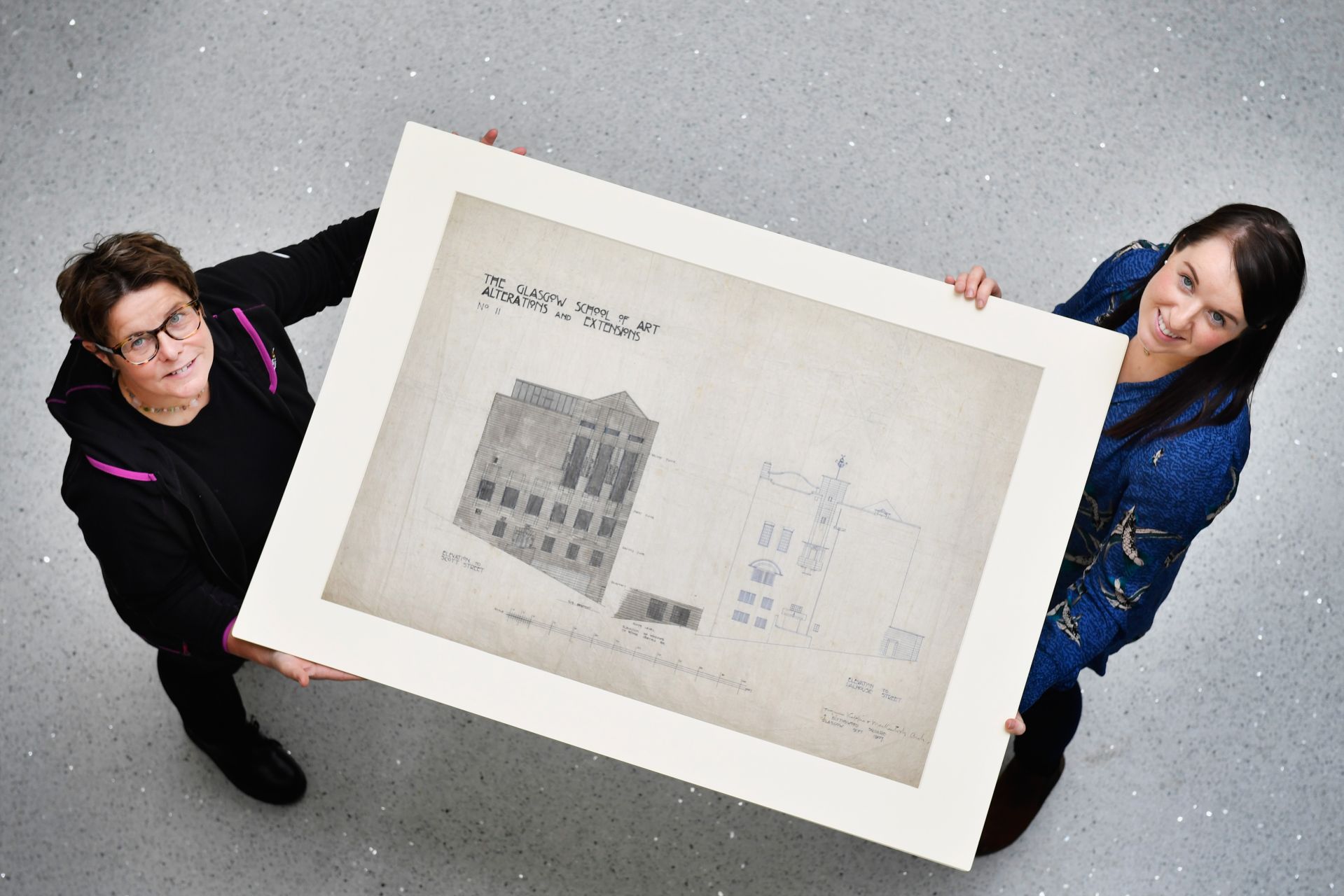 Lizzie ONeill collections management officer and Liz Davidson project management manager, hold the original Mackintosh Art School plans at The Hunterian Collections Study Centre on September 19, 2016 in Glasgow, Scotland. Over one million of the items from The Hunterian collections are currently being moved to bespoke storage and study facilities at Kelvin Hall—the newly refurbished Glasgow landmark building transformed by a partnership between the University of Glasgow, Glasgow City Council, Glasgow Life and the National Library of Scotland.
Jeff J Mitchell/Getty Images 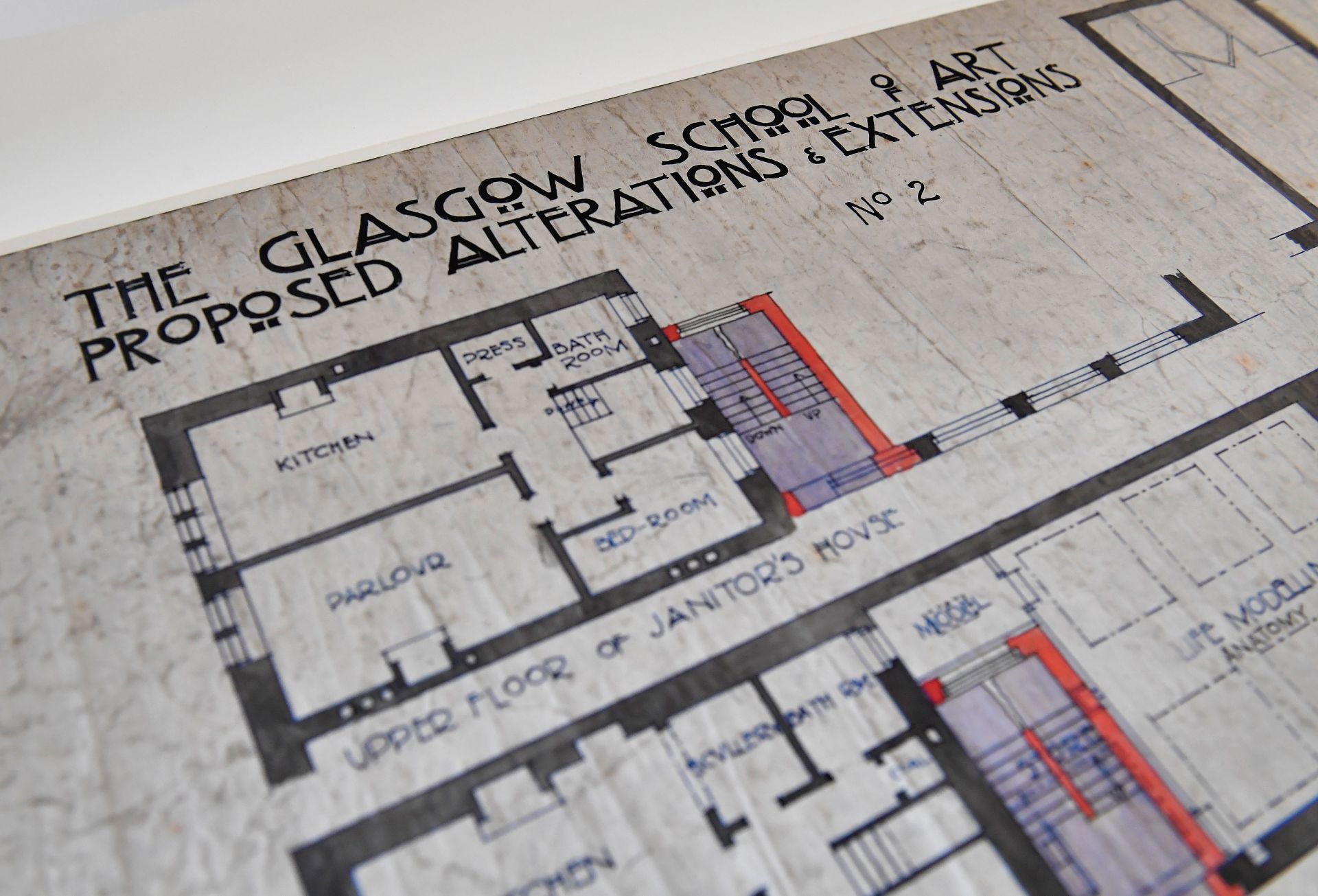 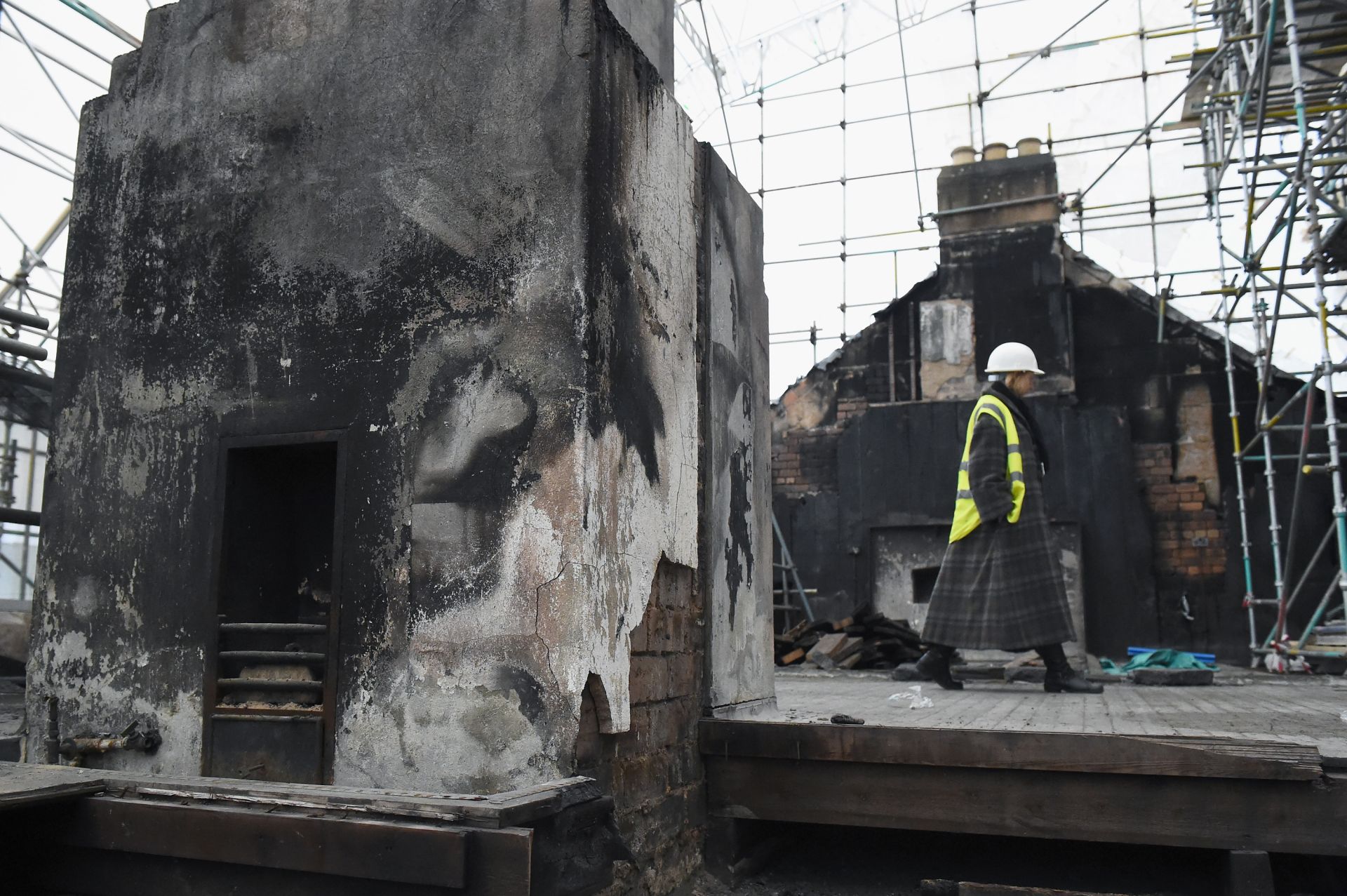 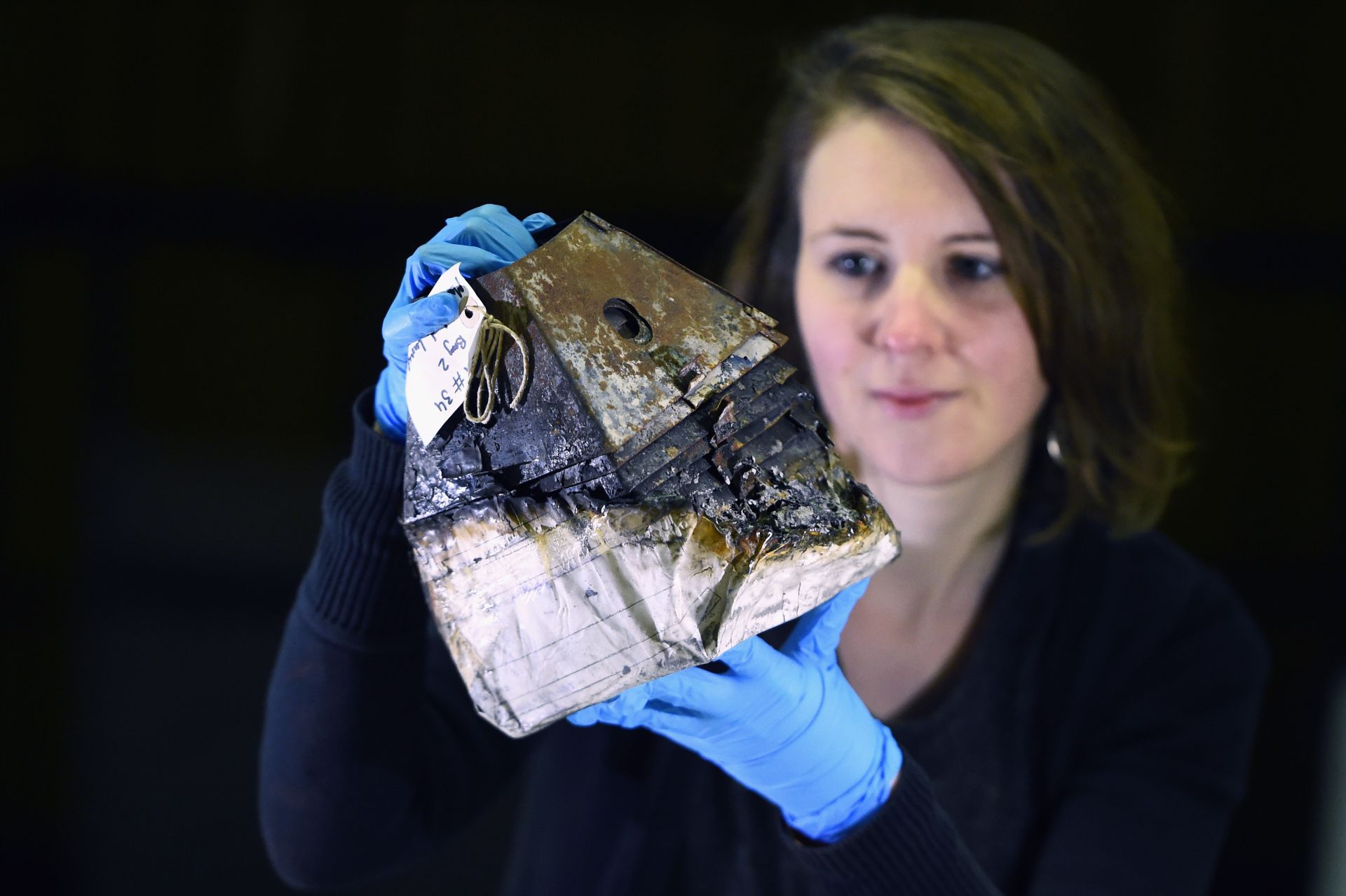 Forensic archaeologists begin sifting through the ashes of the fire damaged Mackintosh Library at the Glasgow School of Art on November 18, 2014 in Glasgow, Scotland. The library, one of the world's finest examples of art nouveau, was destroyed by fire in May. Experts are hoping to recover items that can be restored and help with the buildings restoration.
Jeff J Mitchell/Getty Images
Advertisement 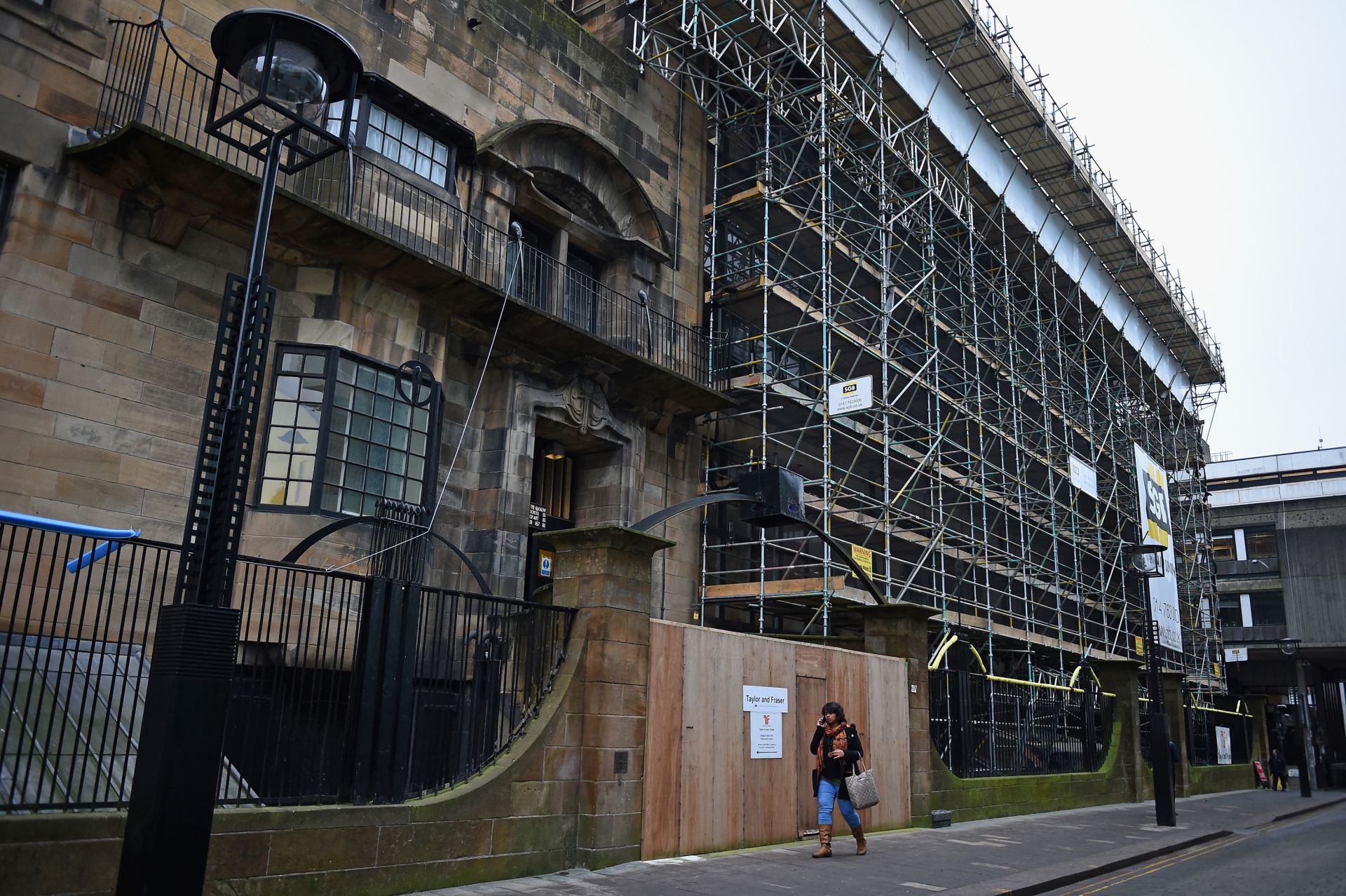 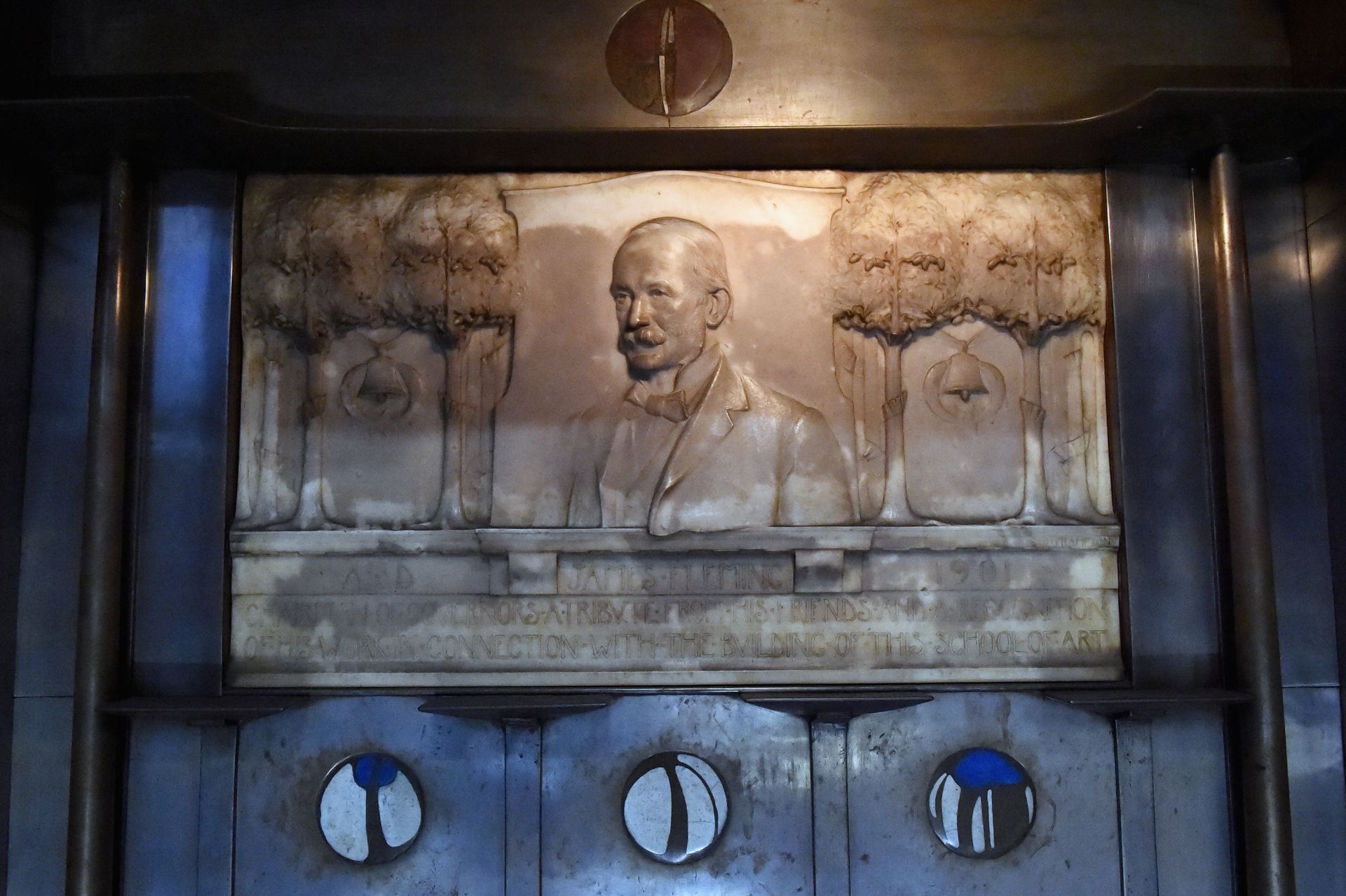 A memorial plaque from 1901 of Sir James Fleming, sometime chairman of the Glasgow School of art, which survived the fire.
Jeff J Mitchell/Getty Images 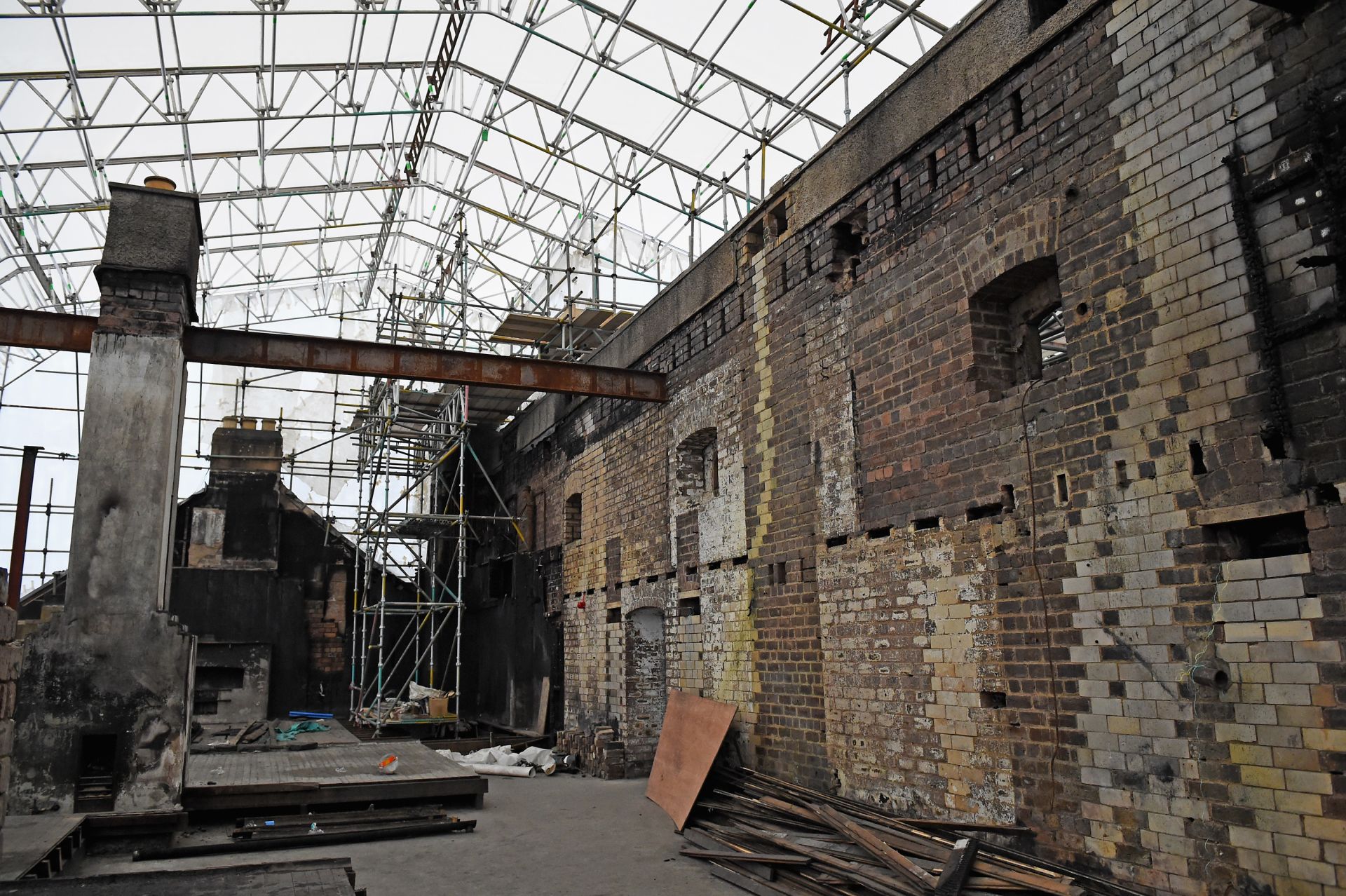 A view of the professors studios in the Glasgow School of Art Mackintosh building.
Jeff J Mitchell/Getty Images 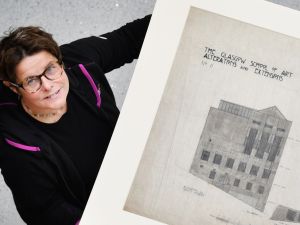 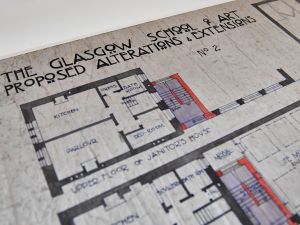 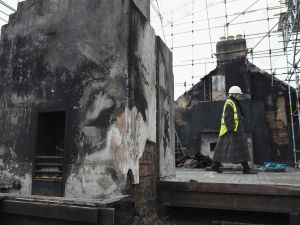 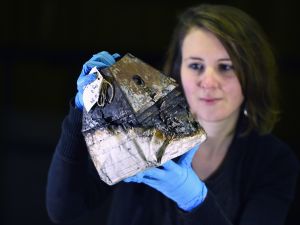 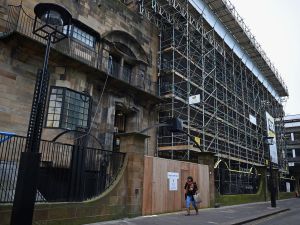 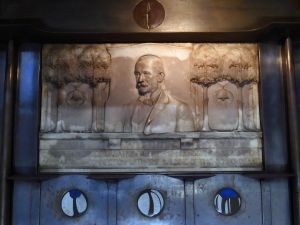 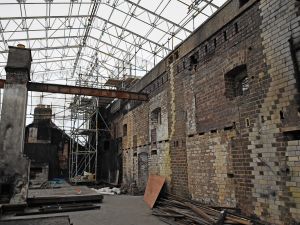 On May 23, 2014, a fire destroyed renowned Scottish architect Charles Rennie Mackintosh’s Art Nouveau library inside the Glasgow School of Art. The building, considered widely to be an architectural masterpiece, was a devastating loss for the school, the city, and the artistic community at large. But now, thanks to fundraising efforts and the dedication of art restoration experts and craftsman, Mackintosh’s ornate 1910 study hall is one step further toward resurrection. But trying to recreate a masterpiece is no easy task, as recent article in The Scotsman highlights by shining a light on the team of craftsman who have accepted the challenge.

“It’s been a real eye-opener, the level of detail you have to go into and the passion that lies behind the reconstruction of such an iconic building,” said David MacDonald, co-owner of the architectural joinery company Laurence McIntosh Ltd. Macdonald’s team is working full time from now until the end of the month to try and replicate Mackintosh’s library from his original plans, historic photographs, drawings and a myriad of sources—many of which provide contradictory directions, reports The Scotsman. Their goal: to craft a meticulously detailed, life-size version of one of the library rooms, which they hope will be approved for construction by the GSA’s expert panel to replace destroyed sections of the school.

However, the team faces considerable challenges, MacDonald says, in both trying to piece together the blueprints of Mackintosh’s original designs from the assortment of primary and secondary sources on hand, and staying faithful to the building techniques commonly used by workers at the turn of the century.

“In some ways the room was actually fairly badly put together and we are going to have to try to replicate that,” lead craftsman Angus Johnston told The Scotsman. “When we’re finished, one set of people will probably ask: ‘Why is it so badly made?’ while others, who know more about it, will say: ‘That is too good’. We are trying to pitch it somewhere in the middle.”

Other challenges for the team include interpreting the correct color of wood stain from old photographs, the precise details of intricate carvings, and sourcing wood that is grown and harvested so differently today than it was at the turn of the century that extra care must be paid to its brittle and delicate surface. The team is so serious about remaining true to the techniques of the Art Nouveau era that they’ve even searched out horse-hair matting to use as insulation, and the original nails used in construction to a company based in Massachusetts. “Everything you do makes a subtle difference,” says Johnston.

While opinions between experts, city residents and GSA students have been split as to whether or not the library should be rebuilt or replaced with something all together new, the GSA is pressing forward with its current efforts to recreate Mackintosh’s beloved rooms. The new library will be “Less a pastiche than a fresh iteration of an existing score,” according to GSA spokesperson Lesley Booth.

Sure, the 2017 rebuild won’t be the old, creaky library that was—some later additions to the original plans such as radiators and a staircase to the mezzanine won’t be resurrected—but Mcintosh Ltd.’s restorers, along with historians working on the project, are passionately sawing and sanding overtime to make sure those elements which made Mackintosh’s library special in the first place won’t become long lost history.