Evolution is usually very slow, a process of change that takes thousands or millions of years to see.

But for influenza, evolution is fast – and deadly. Flu viruses change rapidly to escape the body’s defenses. Every few years, new variants of flu emerge and cause epidemics around the world.

Controlling the spread of flu means dealing with this ongoing evolution. Each year, experts from the World Health Organization (WHO) must make their best guess about how the virus will change in order to choose which flu strains to include in the annual vaccine.

This work is difficult and uncertain, and mistakes have real consequences. Worldwide, flu infects several million people each year and causes hundreds of thousands of deaths. In years when predictions miss the mark and the flu shot is very different from circulating strains, more people are vulnerable to infection.

In the past several years, advances in genome sequencing have begun to shed light on the beginnings of viral evolution, deep within individual infections. We wondered whether, for flu, this information might give us an early glimpse of future global evolutionary trends.

What could a single person’s flu infection tell us about how the virus changes across the world? As it turns out, a surprising amount.

Looking deep inside an infection

Every step in flu’s evolution begins with a mistake. As viruses copy themselves within an infected person, they sometimes mutate, creating small changes to their genetic blueprint.

Most mutations are harmful to the virus because they break the machinery it needs to function. But every so often, a mutant virus survives, and even thrives. Viruses play a constant game of cat-and-mouse with the human immune system. Sometimes, a mutant virus may be just different enough to escape the body’s notice.

A mutant virus with this kind of advantage can multiply quickly and come to dominate the infection. Eventually, it may even spread from person to person, and from there, start spreading around the world.

Recently, it’s become easier to track how viruses change within the human body. The same advances that have made it cheap and easy to sequence human genomes are changing how we study viruses. For the cost of sequencing a single human genome, we can sequence thousands of viruses from throughout an infection to track new mutations as they arise.

These mutations can show us how the virus reacts to challenging environments within the human body. For HIV, where infections often last years or even decades, evolution can be substantial, even within a single person. In particular, viruses often evolve drug resistance in response to antiviral treatment.

How did flu change within these long infections? By sequencing viruses from different times during the infection and comparing their genomes, we were able to identify new mutations and track their fates.

Evolution acted in a matter of weeks. One clear example was resistance to Tamiflu. The patients we studied were taking the drug to control their infections. But, as in prior studies, viruses carrying drug-resistance mutations eventually emerged. These mutations might partly explain why the infections lasted so long.

Drug-resistance mutations weren’t the only evolutionary changes we saw. Half a dozen mutant viruses, all just slightly different from one another, would sometimes compete simultaneously in a single person.

These competing viruses made evolution a complicated affair. A mutation that started spreading one week would sometimes go extinct the next. Presumably, it was outcompeted by an even better mutation.

In some cases, we found the exact same mutations in viruses from different patients in our study, even though we could tell that the patients did not infect each other. We’d only very rarely expect such similarities to happen due to chance. The viruses may have hit on similar adaptations in response to evolutionary challenges. Some of these mutations may have helped the virus avoid the immune system, echoing other studies.

What’s more, many mutations within these patients matched mutations that later spread around the world. In the spikes of flu’s outer coat, which help the virus enter host cells, the mutation N225D emerged in three of the four patients in our study. By 2015, about eight years after our patients were infected, most flu viruses around the world carried the exact same change.

For us, this was unexpected. Evolution is full of trade-offs, and some mutations that help flu adapt within people may slow its transmission from person to person. We also didn’t know whether evolution in such unusually long flu infections would match patterns of change around the world.

But in our study, flu evolution in individual people showed striking similarities to evolution around the globe. We could see hints of some global evolutionary trends within just a few individuals.

As technologies continue to improve, it’s becoming easier to look deep inside flu infections, like we did. WHO labs sequence flu strains from thousands of people every year to monitor flu evolution. Researchers are sequencing more and more strains in ways that let us catch mutations as they first arise within individual people.

Each of these thousands of infections is like a separate evolutionary experiment. By comparing mutations that appear in different infections, we may get a sense of evolutionary possibilities and constraints.

Somewhere down the line, this kind of information may help forecast flu’s evolution. For now, at least, it’s uncovering some of the dynamic processes of evolution that take place within each of us.

Katherine Xue is a Doctoral Student in Genome Sciences at the University of Washington and Jesse Bloom is an Associate Member, Fred Hutchinson Cancer Research Center and Affiliate Associate Professor of Genome Sciences and Microbiology at the University of Washington. This article was originally published on The Conversation. Read the original article. 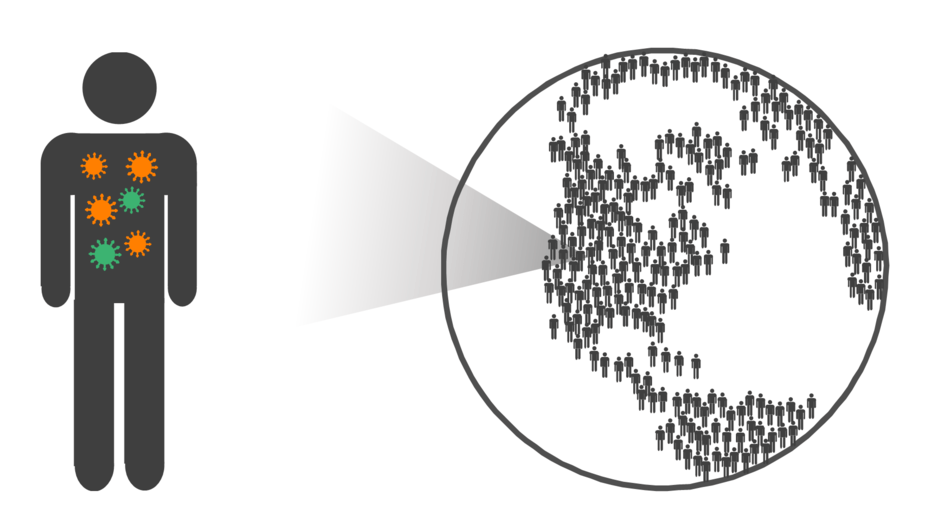