Imagined Dialogue For’ is our series by the hilarious and talented Chris Scott, of Reviews of Movies I Haven’t Seen fame. Next up? Chris takes a stab at guessing what happens in this summer’s most thrilling political thriller...the news.

JAMES COMEY: –so I had some time to kill anyway before picking my nephew up from soccer practice. And I needed some new plain white t-shirts anyway, so that’s when I decided to stop at Target. Huge mistake as I would come to realize soon enough.

SENATOR GILLIBRAND: Ok, if I may–

GILLIBRAND: If we can get back to–

COMEY: No, no, I will. I’ll address Trump and the Russia thing. Just give me a minute.

GILLIBRAND: –if it’s not relevant–

COMEY: I’m at Target in the men’s section and I find the white t-shirts I’m looking for. I’m very particular.

COMEY: –which was in and of itself a bit of a hassle, but whatever.

MCCAIN: And you’re still looking for your shirts, or you’ve already found them.

COMEY: I’ve already found them at this point but I saw other ones that I thought were the right ones. But I was right the first time, Hanes was what I was looking for.

MCCAIN: The Hanes shirts are the right ones.

MCCAIN: Ok, how much longer is this because we have precious little time I’m afraid and–

COMEY: So, right. Found the shirts, then I head to the dressing room.

SENATOR SCHUMER: If I may just– sorry to interrupt.

COMEY: No, go ahead.

SCHUMER: You said earlier these are shirts you already had.

COMEY: No, I’m at the Target buying them.

SCHUMER: Right, no, but the Hanes large white t-shirts. You’ve bought these before. You’ve worn them.

SCHUMER: So I guess I’m confused why you’re taking them to the dressing room in the first place if– I mean these things are pretty uniform, right?

COMEY: But they change them time to time. It really depends on where they’re manufactured.

SCHUMER: I understand that, but–

COMEY: And it’s just habit I guess. I don’t like to buy any clothing without trying it on.

SCHUMER: Will this all tie into Trump or Russia at any point?

COMEY: So the woman asks how many items I have. I say six. Big mistake, which I’ll get to in a second.

SENATOR MCCONNELL: Sir, we have five more minutes to ask you questions about the Russia–

COMEY: Just a second. She hands me the tag with the number “6” on it. I go back to the dressing room, lock the door behind me. Open the package and take one of the six white t-shirts out. And I try it on and, what do you know [laughs] it’s too baggy. Senator Schumer, I hope you caught that.

SCHUMER: Sir, we don’t care about this at all.

MCCONNELL: You’re not supposed to open the package like that, just to try it on. You can’t–

COMEY: I put the shirt back in the package and walk out of the room and take it up to the lady. And I hand her the shirts and the “6” tag and she says I wasn’t supposed to open the Hanes package.

MCCONNELL: Yeah, I was going to say. You can’t just open it, because then they can’t sell it if it’s been opened.

COMEY: Be that as it may, how am I supposed to try the shirt on without opening the package. It doesn’t make any sense.

MCCONNELL: Sir, if I may, when you and President Trump were having dinner on the night of the 14th, did–

COMEY: THEN before I can even explain this to her, she goes “Where are the other five items?” And I said, “There are six, that’s why you gave me a number six.” And she goes, “No, there’s one package here, one item. Where are the other five?” And I — very calmly and clearly, I might add — I said, “There are six shirts here. One, two, three, four, five, six.” I count each shirt out just like that in front of her. And she says–

MCCONNELL: Sir, can I–

COMEY: One more minute. And she says–

MCCONNELL: Sir, we’re out of time. 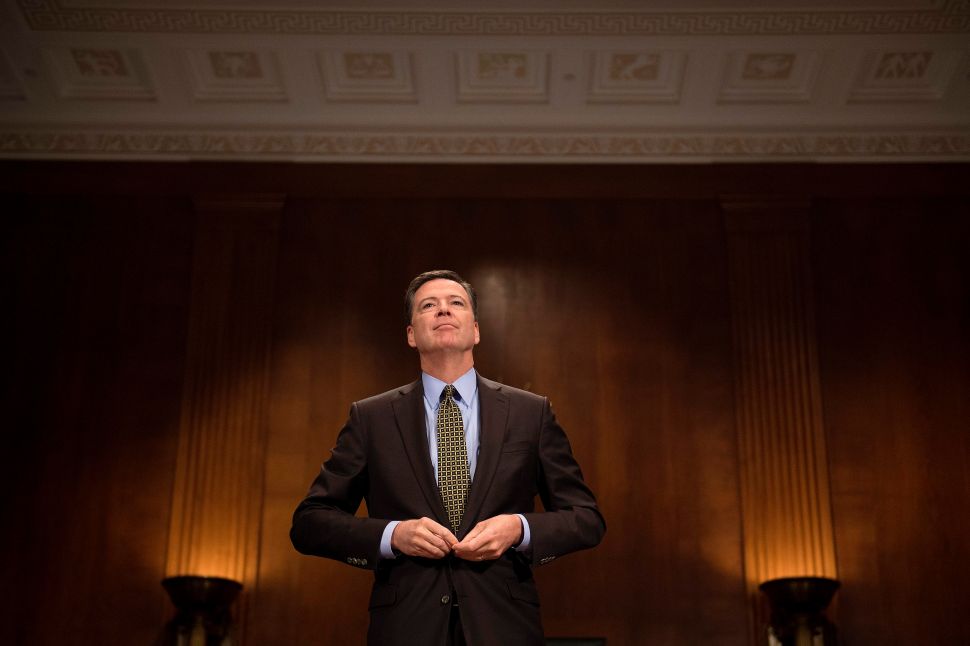