The cast of Insecure. HBO

When the Insecure cast and creatives gathered for a For Your Consideration panel hosted by Deadline, there were many laughs as the crew talked about season one and how their process is evolving in season two, which is now in production in Los Angeles. The panel included executive producer/star Issa Rae, cast members Yvonne Orji, Jay Ellis, and Lisa Joyce, executive producer Prentice Penny, and executive producer/director Melina Matsoukas.

Here’s what we learned:

–Issa Rae chose the fifth episode because “it was the tipping point.” Prentice Penny added, “Shoutout to (HBO executive) Amy Gravitt. She told us to move the juicy stuff with Daniel earlier in the season; originally we had it near the season finale. Then Issa’s cheating on Lawrence in the middle and we’re painting ourselves into these corners and it was exciting to figure out how to get out.” Issa Rae said it also changed from Issa just kissing her old flame Daniel to having sex with him, “That also opened the entire book because you can only cheat on Lawrence once.”

–Yvonne Orji chose the fight between Lawrence and Issa in episode seven because “it’s so heartbreaking. You really feel Lawrence, especially when he keeps saying, ‘Who? Who?’”

–Jay Ellis loved the season finale scene with Molly and Issa driving back from Malibu, “I enjoyed watching them tiptoe around each other, not directly talking *to* each other but on the same page at the same time. I’ve never gotten to see two black women do that on television.”

–Prentice Penny liked the fantasy sequence in episode four where Issa was in front of a mirror talking to Daniel, a bottle of champagne and the magical appearance of Ty Dolla Sign. Penny described, “The way director Kevin Bray shot it – Issa saw the champagne coming outta there and the laughs and then Ty Dolla Sign appears. It’s this crazy world. Issa is selling it and then Molly stops it when she says, “Have you forgotten about your man?” and Issa says, “I appreciate you, girl” and then it goes into this serious place and takes a left.”

–Melina Matsoukas chose the final montage in the season finale, “When Issa thinks Lawrence will be there (in the apartment) then we cut to Lawrence having sex with Tasha. We end on Issa and Molly, two women on the couch, there for each other.”

From the amount of questions posed by young black women during and after the FYC panel, it was clear Matsoukas and Rae are inspiring a new generation of female creative talent. 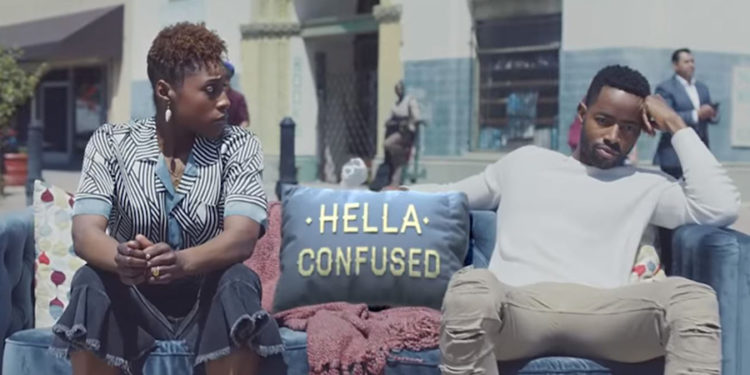