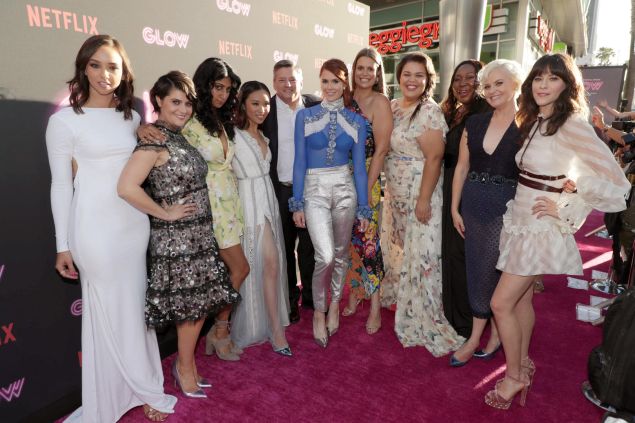 The entire cast, led by Alison Brie, knew they were making something unique when they were shooting the show. Brie said, “This was the role of a lifetime. I’m so proud of the work I’ve done here.” Jackie Tohn, who plays party girl Melrose and delivers a breakout performance, described her experience, “I’d read the script and I couldn’t believe I was getting to do this. This felt like it was coming from my guts. It felt special and incredible that way. Connecting with these women was empowering. We went in not having any idea what we were capable of and we left saying ‘Is there an ass I need to kick anywhere?’ We just feel strong.”

Kate Nash plays Rhonda, a lively Brit whose wrestling character is Brittanica. Nash also raved about working with the Glow company, “It was empowering to do something I never thought I’d be able to do physically with my body, with these incredible women who supported me, encouraged me and helped me succeed.”

Rebekka Johnson plays Dawn, half of a very funny pair of hairdressers (with Kimmy Gatewood’s Stacey) who create a duo of comedic wrestling characters for the TV show. Johnson talked about the personal growth she experienced working on Glow, “Wresting is so empowering – it made me feel like a superhero. I have anxiety. I could barely ride a bike. Then I had to act and learn to wrestle for this. I feel so much stronger.” Johnson also praised show creators Mensch and Flahive, “The fact that all fourteen of us have very nuanced, layered characters was so amazing. Often, I’ve auditioned for things where the women don’t have a description, just an age, and maybe what they look like physically, but this was so layered, it was awesome. Also, I’m a mother and there were several moms on set so our kids would come for dinner and there were toddlers running around. My mom bod is out there for the world to see!”

While Glow is packed with talented women, there are some men in the show too. Marc Maron portrays Sam Silvia, the director hired to turn “lady wrestling” into a TV show by producer Sebastian “Bash” Howard, who’s played by Chris Lowell. Maron said he wasn’t really looking for another show to do after wrapping his IFC show “Maron,” but when his manager sent him the Glow script, Maron found he really wanted to do the show, going so far as to put himself on tape auditioning for the role, “My manager said they weren’t really looking at anyone in L.A. and told me to put something on tape. I went and got some ‘80s glasses, I had my personal trainer read Alison’s part and my part-time assistant filmed me. I sent in the tape and got booked off it.” Maron’s enthusiasm for his Glow colleagues was genuine, “Jenji’s a genius. Liz and Carly created this amazing script. My character was something I could do and put my heart into because I was like that guy and I related to him.”

Chris Lowell wasn’t sure he was up to his role in Glow as entitled trust fund heir slash producer Bash Howard. He talked about how he got involved, “I got approached by Liz and Carly and I was hesitant to do it because I didn’t think I was right for the part but they had seen me in a play called Jacuzzi in New York at ARS Nova where they’re resident artists, and they said ‘If you did that, you can do this.’ I was just so flattered they believed in me. I could not be more grateful.” Lowell also noted the difference in working on a show with so much feminine energy, “I’ve worked on a lot of good ol’ boy shows where it’s very male-centric and I typically don’t enjoy that environment very much and I loved every minute of this job.”

Show creators and executive producers Carly Mensch and Liz Flahive worked on female-centric shows including Nurse Jackie, Weeds, and Orange Is the New Black, and in Glow, they’ve again crafted nuanced, shaded female characters with issues. There’s a key story point that hinges on one woman’s rage and betrayal but we won’t spoil it for you – you’ll have to watch and find out. Mensch and Flahive commented on their artful use of female anger in the space of the show, “We’re just trying to tell honest stories about these women. We stumbled upon this art form, wrestling, which is actually the perfect size for venting and showcasing and exploring women’s rage. It’s very productive. When women channel something and use their bodies to do something completely different, stuff happens. You go to a totally different place when you get into the ring and that’s exciting to us.”

Season one of Glow streams on Netflix June 23rd. 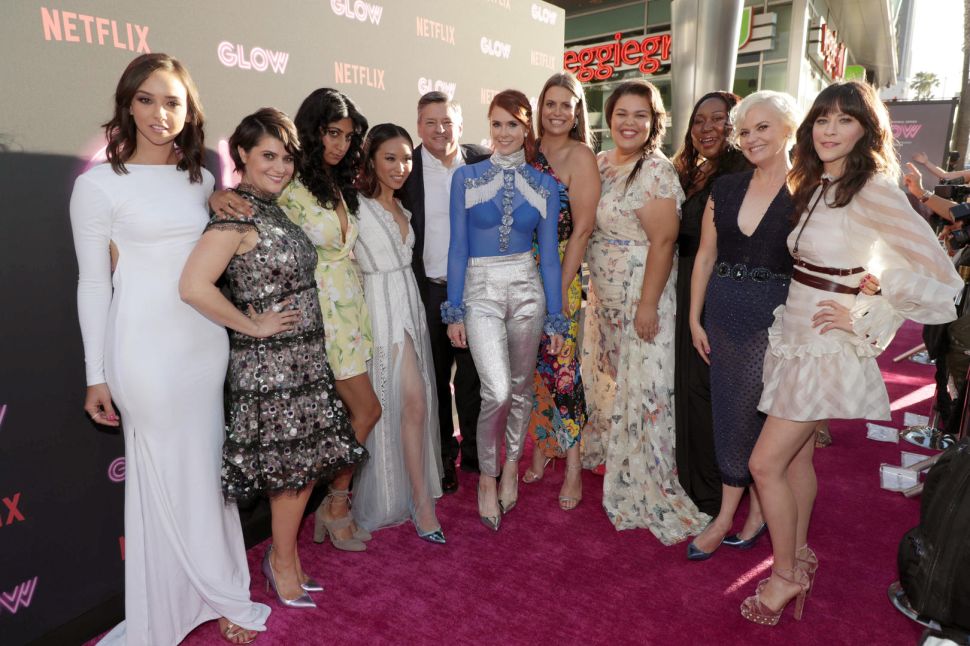