Feel free to check out the @the_press_tour if you're interested in information about sustainable fashion 💚💚💚 Paris photocall for the @wearethecircle, which is out in France on 12th July 🇫🇷⭕ Dress by @louisvuitton, embroidered by hand in Atelier Vermont in Paris. The silk lace was handmade in Caudry, a small French town that specialises in lace production, in an atelier that is certified by ‘Entreprise du Patrimoine Vivant’, which is a recognition to reward French companies for the excellence of their traditional skills, and aims to preserve traditional savoir-faire that is in danger of disappearing. The lace is made from Oeko-Tex 100 certified materials, which means that they don’t contain toxic substances. Shoes made in Italy by @santoniofficial, whose HQ is powered by 4,000 solar panels. Santoni also runs a school where young people can learn the craft of shoemaking. @fernandojorge uses small workshops in central São Paulo to manufacture all his pieces. His motivation is to stimulate the local craftsmanship and emphasise the quality of “Made in Brazil”. Bag made in a family-owned factory in Alicante, Spain by @m2malletier. The factory was opened in 1981 by shoe designer Jaime Romero and his wife, together with 3 of his sons. Today, 25 artisans from the local town of Sax work in the factory, and have all been working there for at least 15 years. Everything is handcrafted using skills and traditions which have been passed from generation to generation. All fashion info verified by @ecoage For skin, the organic concealer/foundation 'Un' Cover-Up in colour 22 by @rmsbeauty was used with the @janeiredale Active Light Concealer under the eyes. Silicone-free Bronzer by @vitaliberata Trystal Self Tanning Bronzing Minerals. For eyes, the Ecocert certified @antonymcosmetics Natural Eyeliner Pencil in Brown and Organic Nosiette Eyeshadow were used. For brows, Jane Iredale Pure Brow Gel was used and @herbivorebotanicals Coco Rose Tint in Coral, which is suitable for vegans, was used to tint the cheeks. Lips are lined with Jane Iredale Lip Pencil in Crimson before @iliabeauty Arabian Knights was added.

The former first lady shared her boot camp routine, revealing the secret to her toned arms.

When I was at the White House, I often hosted bootcamp weekends for my close girlfriends. It didn’t matter that we were all at varying fitness levels. Our bootcamp weekends were a reminder that if we want to keep taking care of others, we need to take care of ourselves first. And even though I’m no longer at the White House, I've continued this tradition and wanted to share some photos. My girlfriends have been there for me through all kinds of life transitions over the years – including a pretty big one recently! – and we’ve done our best to stay healthy together. Whether it’s a bootcamp or a walk around the neighborhood, I hope you and your crew can find some time this summer to be healthy together.

Wishing a big happy birthday to my dear friend, the one and only, mega-talented, #NicoleKidman!!! 🎂I hope you have a gorgeous day filled with laughter and love. Love you, lady!! 💖👑 💖

In other tennis news, David Beckham and his son Romeo attended the 2017 Aegon Championships match in London, at Queens Club.

Lovely day with the little man at Queens 🎾 @romeobeckham ❤️

The model posted a photo in an olive green dress and pointy white boots.

Pretty Little Liars star Shay Mitchell is getting nostalgic as the show comes to an end, and posted a photo with her castmate Sasha Pieterse.

I'm having trouble wrapping my head around the fact that after tonight, there is only one episode left of #PLL . So many years of our lives and I'm still not quite ready to leave the girls in Rosewood. Enjoy tonight's episode and also, Emison is endgame. Xo shAy 💋

Kendall Jenner was feeling the retro vibes in her gingham bikini and updo. 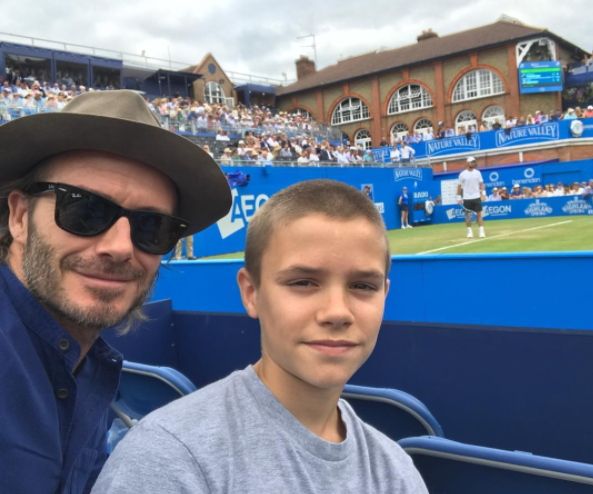