If you were near a television today, undoubtedly you caught at least some of former FBI Director James Comey’s testimony before the Senate Intelligence Committee on Capitol Hill.

Comey’s hearing was anti-climactic, as his opening statement or “testimony,” was released by the Committee the previous day. That testimony included Comey’s assertion that President Donald Trump told him that he “hoped” he could “see his way” to let go of the investigation of Michael Flynn.

During the hearing, Comey confirmed that Flynn was in serious legal trouble at the time that he was director.

The White House denies that President Trump made this request to Comey. If indeed it did happen, the request was inappropriate.

“That should not have happened,” U.S. Sen. Marco Rubio, a member of the Senate Intelligence Committee, said after the hearing.

The question is whether something that was inappropriate rises to the level of being illegal.

Democrats are casually throwing around the term “obstruction of justice.”

As Andrew McCarthy of National Review has pointed out, “Much of the commentariat assumes that any interference in an investigation equals obstruction. It is simply not true.”

Let’s examine what “obstruction of justice” requires, according to Section 1505 of the federal penal code (Title 18):

Whoever corruptly, or by threats or force, or by any threatening letter or communication influences, obstructs, or impedes or endeavors to influence, obstruct, or impede the due and proper administration of the law under which any pending proceeding is being had before any department or agency of the United States, [shall be guilty of a crime].

Did President Trump use threat or force?

From my reading of this, which liberal law professors Alan Dershowitz and Jonathan Turley have also said, what President Trump did here was inappropriate but not illegal. But the entirety of the news from the hearing was not bad for President Trump.

Comey could not explain why he did not raise Trump’s “inappropriate” behavior in the Oval Office with his superiors or the oversight committees in Congress at the time it allegedly happened.

Comey admitted that he leaked his own memo to a friend at Columbia University with the specific goal of forcing a Special Counsel to be appointed. This is a bombshell revelation.

Comey confirmed that he told President Trump, on at least three occasions, that he was not under investigation.

Set “Donald Trump” aside for a second.

Imagine that you are a high-profile individual, and a prosecutor tells you on three occasions that you are not under investigation, but the newspapers and cable news channels continually say you are.

Wouldn’t you be frustrated?

This fact alone may explain why Trump fired Comey.

Add to that an apparent reluctance from Comey to fully investigate and prosecute leaks of classified information, in addition to the bipartisan dissatisfaction with his handling of the Clinton email investigation, and the president lost confidence in Comey to lead the FBI.

Today’s hearing offered great drama, but it may have offered much sound and fury, signifying very little.

What matters is what evidence Special Counsel Robert Mueller is collecting and what his decision is regarding criminal charges. That may be revealed next month or next year—no one knows.

The speculation, reporting and media accusations will continue and almost certainly escalate.

But today was a home run for neither side.

Matt Mackowiak is the president of Austin-based Potomac Strategy Group, a Republican consultant, a Bush administration and Bush-Cheney re-election campaign veteran, and former press secretary to two U.S. senators. He is the host of a new national politics podcast, Mack on Politics, produced in partnership with The Washington Times. His podcast may be found on iTunes, Stitcher, Google Play or at MackOnPolitics.com 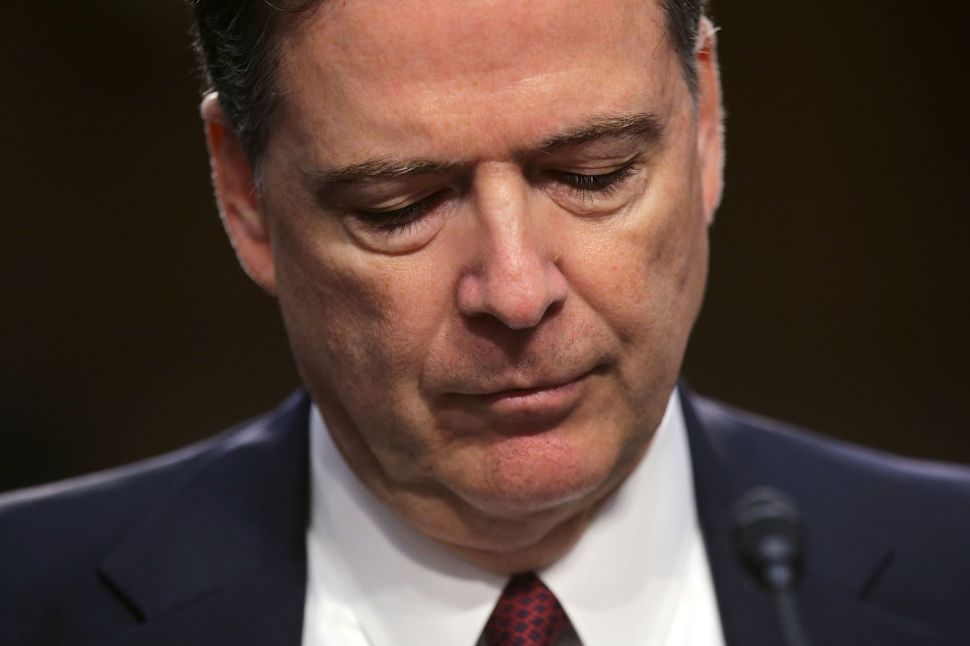