Yesterday, after weeks of anticipation, James Comey testified before the Senate Select Committee on Intelligence, offering his account of how and why President Donald Trump unexpectedly fired him as FBI director one month ago. As expected, Comey came across as the careful and calm career legal bureaucrat which he is. Both the pro- and anti-Trump camps heard things they liked in Comey’s testimony.

Predictably, the president’s supporters are trumpeting things they heard Comey say—or at least what they think they heard him say. Already the White House is running with Comey’s words which, they claim, vindicate the president and his version of how things went very wrong between Trump and his FBI director over the Bureau’s counterintelligence investigation of Russian interference in our 2016 election.

On the positive side, Trump’s supporters are taking comfort from Comey’s admission that he had, in fact, informed the president that he was not personally under FBI counterintelligence investigation last winter. This, while true, is something of a technicality, since Comey admitted that Russian interference in our 2016 election was very real—“with purpose and sophistication”—no matter what the president tweets.

When asked about this critical issue by Republican Senator Richard Burr, the SSCI chair, Comey’s responses were clear-cut:

Burr: Do you have any doubt that Russia attempted to interfere in the 2016 elections?

Burr: Do you have any doubt that the Russian government was behind the intrusions in the D triple C systems and the subsequent leaks of that information?

Comey: No, no doubt.

Burr: Do you have any doubt the Russian government was behind the cyber intrusion in the state voter files?

Trump backers are gloating over Comey’s unwillingness to say that the president committed obstruction of justice when he asked him to drop the FBI investigation of retired Lieutenant General Michael Flynn, Trump’s short-lived national security adviser, who was fired after just three weeks over his hidden ties to Moscow.

In truth, Comey left the door wide open for Robert Mueller, the special counsel appointed by the Justice Department, to decide for himself whether the president committed obstruction of justice here. Comey sensibly did not want to publicly state that conclusion yet.

Overall, the bad news for the president in Comey’s testimony today far outweighed the good. Team Trump’s present gloating about their alleged vindication will prove to be short-lived. Above all, Comey left no doubt that he is confident that Trump cashiered him as FBI director over the Russia issue. Regardless of whether the president explicitly asked Comey to “let go” of the Bureau’s investigation of Flynn, whom the former director admitted was under risk of being charged with criminal offenses, Comey understood that Trump was asking him to back off an active investigation of the highest national significance—a request which “stunned” him, he stated.

In addition, three major issues came up in yesterday’s testimony which will have important impacts on where the FBI and Mueller-led investigations of KremlinGate are headed. Let’s walk through them.

For Comey, this is personal.

The former director made clear today that he believes the president maligned him and the FBI with his public comments and his reported ugly statements to Russian diplomats about Comey’s firing. This was obviously a deeply personal affront to Comey, and his statement today exuded his anger:

It’s unprecedented for a top American intelligence or law enforcement official—until recently, Comey was both—to publicly call out the president as a bald-faced liar, but that’s what happened. Comey is a tenacious fighter, and the White House is naïve if it thinks this matter is resolved.

To Comey, Trump is simply a liar.

From there, things got even worse for the president. Comey admitted that he had kept notes of his meetings with Trump—something he had never done in his interactions with Presidents Bush and Obama. The FBI director did not trust the new commander-in-chief to render their conversations accurately or truthfully, therefore Comey did so meticulously.

“I was honestly concerned he might lie about the nature of our meeting so I thought it important to document,” he informed senators. It’s a rare event when the country’s former secret police chief admits that he has no faith in the president’s fundamental honesty.

Comey made a memorable statement: “I want the American people to know this truth. The FBI is honest. The FBI is strong. And the FBI is and always will be independent.” Omitted, yet easily inferred, was the follow-up line: “Unlike President Trump.”

The Big Reveals are yet to come.

However irritated Trump and his retinue may have been by Comey’s negative comments about the president’s honesty and personality, none of that matters much to the larger issues of the KremlinGate investigation. Yet it was here that Comey’s statements were most alarming—but they were easy to miss if you weren’t listening carefully.

First, Comey dodged questions about the infamous Steele dossier, the raw intelligence report compiled by a former senior British intelligence operative which alleged direct Kremlin ties to the president and his inner circle. When Senator Burr brought up the dossier, Comey swatted his query away: “I don’t think that’s a question I can answer in an open setting because it goes into the details of the investigation.” Which is the unclassified way of stating that parts of the Steele dossier are true, but they must only be discussed in a closed session (which was scheduled for yesterday afternoon).

Further hints of damaging classified information about Team Trump came up in a discussion of Attorney General Jeff Sessions, whose contacts with top Russians in 2016 have been a source of controversy. Comey indicated that there is something worth investigating there. When asked about the attorney general’s recusal from the Russia inquiry, Comey stated: “We also were aware of facts that I can’t discuss in an open setting that would make his continued engagement in a Russia-related investigation problematic.” That’s the unclassified way of explaining that there’s classified evidence that Sessions’ ties to Russians are worrisome from a counterintelligence perspective—and perhaps even illegal.

Last, Comey dropped an easy-to-miss bombshell when he was asked by Republican Senator Tom Cotton if he believed that President Trump has colluded with Russia. The former FBI director’s reply was terse: “That’s a question I don’t think I should answer in an open setting.”

To anybody versed in how classified information is handled in Washington, that’s a jaw-dropping response, since Comey de facto admitted that there is evidence that the president colluded with the Kremlin in 2016—but that information, being classified, cannot be discussed in an open session.

Even before yesterday’s Comey Show, many Americans were troubled by Trump’s shadowy ties to Moscow and his apparent inability to come clean about them. This week, a new poll showed that fully 61 percent of Americans believe that the president fired Comey from his FBI job to protect himself from the Russia investigation—not for the good of the country. It’s doubtful that number will drop after today’s revelations in Congress. 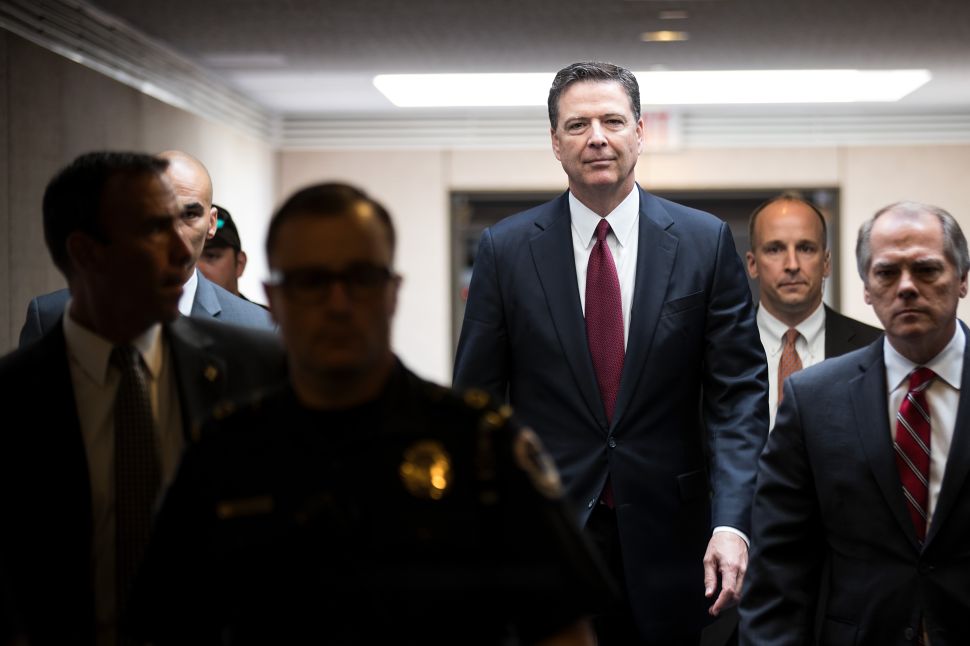