In the early years of The Simpsons, actor Phil Hartman voiced the role of the shifty lawyer Lionel Hutz, a mall-dwelling “law-talkin’ guy” whose storefront motto was “I Can’t Believe It’s a Law Firm!”

Sekulow rarely gets challenged on Fox, especially when interviewed by Trump poodle Sean Hannity, who reliably barks “Yep! Yep! Yep!” at Sekulow’s most ludicrous assertions. On Sunday, Wallace wasn’t buying them. He pointed out that Sekulow said Trump was under investigation two times.

WALLACE: “You’ve now said he is getting investigated after saying that you didn’t—”

SEKULOW: “No, he’s not being investigated.”

WALLACE: “You just said that he’s being investigated.”

SEKULOW: “No, Chris. I said that the inves—anything—let me be crystal clear so you completely understand. We have not received nor are we aware of any investigation of the President of the United States.”

If there were an investigation by special counsel Robert Mueller, it might involve Trump’s firing of FBI Director James Comey for investigating possible connections between Trump’s aides and Russians who hacked Democratic emails in an attempt to influence last November’s election for Trump.

Wallace—and three other Sunday hosts on other networks—pressed Sekulow on Trump’s Twitter tantrum on Friday in which the amateur President wrote, “I am being investigated for firing the FBI director by the man who told me to fire the FBI director! Witch hunt!”

Literally, Trump would be a warlock, not a witch, but Wallace never raised the point with Sekulow, who got nasty with the veteran TV journalist for challenging Sekulow on the “investigation” quotes.

“I appreciate you trying to rephrase it,” Sekulow said.

“Sir, I didn’t rephrase it,” Wallace responded. “Jay, the tape will speak for itself.”

“I do not appreciate you putting words in my mouth,” Sekulow told Wallace.

Ignoring for the moment that it would be hard to put words in Sekulow’s mouth when so many were pouring forth, Wallace said, “You’re speaking for his legal team. So you’re out here to represent him and tell us what the president’s belief is, is that correct?”

Ignoring for the moment that no one has proven that Trump, in fact, even has a conscience, Wallace went on to ask, “Have you spoken to the president at all?”

“Yes,” Sekulow replied, “but I’m not going to discuss those conversations with you.”

Sekulow began to spin theories about why Comey shouldn’t leak what he leaks and why the media shouldn’t report what it reports and what the Constitution really says.

SEKULOW: “Here’s what you’re trying to do, Chris.”

SEKULOW: “No, Chris. I deal with fact and law.”

He kept trying. When Wallace asked Sekulow if the president could be indicted, Sekulow said there is no investigation.

Here are Sekulow’s comments about the investigation:

Sekulow also brought his briefcase of talking points to Face the Nation on CBS, State of the Union on CNN, and Meet the Press on NBC.

All hosts on those shows displayed Trump’s tweet and most seemed confused. On NBC, Chuck Todd asked Sekulow why Trump would say he was under investigation if he was not.

“Is this he just mis-tweeted?” Todd asked. “Are we not to take him at his word… Why is the president confused?… I’m confused by this… But, again, you didn’t answer the question. If the president is innocent, why is he afraid of this investigation?”

On CNN, host Jake Tapper seemed to take pity on the hapless lawyer.

“Is this not frustrating for you as an attorney,” Tapper asked, “to have a client that is sharing information with the world that is not accurate?”

Less charitable later in the evening was David Frum of The Atlantic, who said on MSNBC that the best lawyers don’t want to stump for Trump. 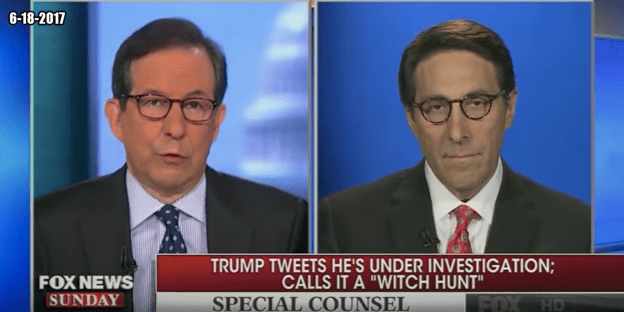