We are in the middle of another stand-up comedy boom. With the regular onslaught of comedy specials hitting Netflix weekly, along with original series like Louie, Inside Amy Schumer and Master of None paving the way for comedians to become superstars, it was only a matter of time before someone peeled back the curtain to examine how this medium all started. And this is exactly what Jim Carrey and Showtime have set out to do with their new series I’m Dying Up Here.

Inspired by the bestselling book of the same name by William Knoedelseder, the drama doesn’t waste any time digging into the very real – and often dark – struggles performers in this world face. For those in the know, the stories of the comedy scene on the Sunset Strip in the ‘70s are legend. It was the time of Carlin, Pryor and Rivers.

As a comedy nerd, myself (I mostly watched HBO comedy specials and snuck out regularly to watch Carson when others my age were digging into whatever cartoon was cool at that time), I jumped at the opportunity to hit Wednesday’s (May 31) red carpet premiere. After watching the first two episodes of the series, I felt compelled to pick the brains of those involved – to really find out why this era is such interesting fodder for today’s “Peak TV” landscape.

But really, my real goal was to come face-to-face with my childhood hero, Mr. Jim Carrey. What exactly would I say, if this was to happen? Not a damn clue, I didn’t plan that far ahead. It’s not like we’d actually meet right? Well …  I’ll get back to that later.

“I think up until recently, there just wasn’t a lot of information about the comedy world,” Executive Producer, Christina Wayne explains. “If you look at the ‘70s, which was really sort of the hay day where comedians, for the first time ever, became sort of the rock stars of their day … I think that kind of dipped down and was quiet and we’re having sort of a renaissance right now where comedians are again becoming super successful and having a lot of power.”

Just how much power did comedians have back then? Just look at the story of how Robin Williams was discovered for Mork & Mindy. He had zero acting experience, but his energy and stage presence up and changed the art of stand-up comedy – as well as the entertainment world — forever.

Wayne continues, “I think everybody’s going, ‘Where did this come from? How did this start?’ And I think that’s what this show does so brilliantly: It really shows you the struggles of how this whole world began.”

For comedians at that time, the main goal was to get invited to the couch on The Tonight Show. If Carson called you over, that was it – you just became a star. It’s that dream that drove so many to come to Hollywood with the goal of “making it.” Unfortunately, it’s wasn’t that easy. It still isn’t.

“It is such a desperate place. People sacrifice everything to be stand-ups,” Al Madrigal explains. “I know someone who slept in their car and ate Kentucky Fried Chicken every day for two years. Jim Carrey slept in a closet. People go through a tremendous amount of sacrifice in hopes that they might get paid. In hopes that it might work out. Who does that!? You’re working for like four years hoping that you might be good at this!? And it takes you a good seven years to be decent. So, it’s a huge investment and sacrifice … to get where? To earn $200 a set?”

Many may recognize Madrigal for his work as recurring correspondent on The Daily Show with Jon Stewart, but he’s been in the stand-up comedy game for two decades. Putting that experience to good use, Madrigal not only plays fictional comic Edgar Martinez in front of the camera, he’s a writer on the show as well. And while that adds to the realism of the subject matter being explored, what really matters is the amount of real comedians I’m Dying Up Here has employed.

Andrew Santino plays budding comic Bill Hobbs, who he describes as “a kind of a dark jealous angry man who embodies a lot of what most comics feel like.” And he’s quick to admit the difficult, and humbling, experience to be a real comic playing a fake comic on TV.

“That’s a hard thing to do,” Santino says, “like faking a voice that you’re completely unfamiliar with. So, that was quite difficult but the challenge of going dark for me on the show wasn’t too farfetched because I lived a lot of that pain, a lot of that failure and heartbreak. I’m 10 years into stand-up and I think I know it as well as anybody else does.”

While the series is about comedians, the show is a dramatic one. Think Boogie Nights but for comedy. And while there is humor in each episode, the stage routines mostly exist in the background. Steven Guarino, who plays the Robin Williams-inspired character of Sully Patterson, quickly breaks it down: “The majority is behind the scenes and you have to investigate how these people truly treat each other. And it’s awful. They’re terrible people. They’re just some of the most narcissistic competitive people out there.”

But behind that competitive narcissism is a desperate darkness. An infinite sadness – sup, Billy Corgan – exposed in all its beautiful glory. After all, comedy has to come from somewhere!

“It was an idea rolling around in my head for a long time, and I wanted people to see the comedy world as it was and the extraordinary experience I was lucky enough to have. And it was an explosive, inventive, alchemical invention coming from so many wonderful extraordinary souls and desperate, desperate motherfuckers,” Jim Carrey told the packed house, when introducing the premiere screening. “It happened at a time following Vietnam, with Nixon and Watergate. What happens is when these extraordinary times politically happen, we were going through terror, and the fear of the end, comics are the last line of defense. We tell the truth, and we make something beautiful out of it.”

And to really nail things home, Carrey tied those troubling times to present day – sending a quick shout out of support to comedian Kathy Griffin, who’s been the focus of all sorts of press since posing for a photo with a bloody depiction of Donald Trump’s severed head.

“Kathy Griffin: Hold up a severed leg! I don’t think the joke is the problem –- the subject of the joke is the problem,” Carrey continued. “Don’t worry for your existence. All this is meaningless. Seriously, everyone is very worried right now. I try to tell people that all of creation is just God’s fidget spinner. It’s really not important. What’s important is we’re all here, and I had such a glorious chance to be in this world of comedy. And to people who say, ‘Is the show too dark?’ Darkness is where diamonds form.”

As I said: Comedy has to come from somewhere.

Once the screening was over, the cast and select members of the press headed over to the iconic Canter’s Deli. It’s a spot near and dear to my heart – and one that has been a regular stomping ground for artists, musicians and comedians for decades. It’s quite fitting that Canter’s is a regular location featured in the series.

As guests enjoyed a variety of deli sandwiches, breakfast dishes, pickles and matzo ball soup, the talent partied it up in the adjacent Kibbutz Room. And as I made my rounds, grabbing a rugelach and brownie as I walked, it was almost kismet that I ended up face-to-face with the man who brought this show idea to Showtime in the first place: Jim Carrey. 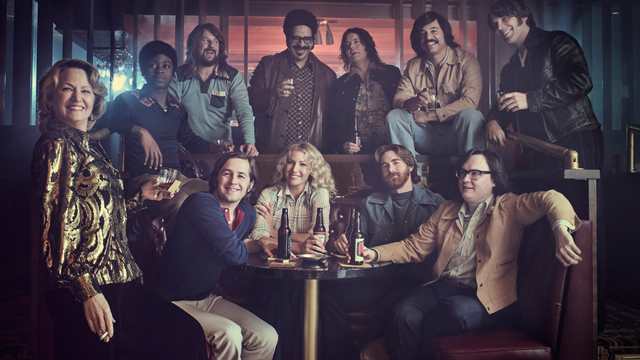