At a time when America’s relations with Germany and Western Europe are at their lowest point in recent memory, June 26, 2017 will take on special meaning. It was on June 26, 1963, when tensions between the United States and Nikita Khrushchev’s Soviet Union threatened both countries, that President John F. Kennedy delivered his famous “Ich bin ein Berliner” speech reaffirming America’s commitment to the defense of Europe.

In this 100th-anniversary year of Kennedy’s birth, his Berlin Wall speech is more than just the symbol of a time when there was widespread agreement by Republicans and Democrats on the goals of American foreign policy.

The Berlin Wall speech, which came during the final June of Kennedy’s presidency, is a reminder of how central the politics of the moral imagination were for him and how damaging their absence from American life today is.

Kennedy’s speech was his tribute to the capacity of Berliners to endure an era when the Cold War cut them off from their countrymen and often their relatives. Such steadfastness on the part of Berliners was heroic, Kennedy insisted. In saying “I am a Berliner” in German rather than English, Kennedy made it clear that he was looking at Berliners’ lives through their eyes.

Kennedy’s response to the Berlin Wall was consistent with the approach to politics that he had taken since his Inauguration, when he avoided bragging about his electoral victory and talked about his entire generation coming of age “tempered by war” and “a hard and bitter peace.”

Weeks before his Berlin speech, Kennedy had proposed the legislation that after his death would become the Civil Rights Act of 1964 by challenging white Americans to put themselves in the shoes of black Americans.

“If an American because his skin is dark cannot eat lunch in a restaurant open to the public, if he cannot send his children to the best public school available, if he cannot vote for the public officials who represent him,” Kennedy had asked in a nationwide television address, “then who among us would be content to have the color of his skin changed and stand in his place?”

A lesser politician would have been content to tell his audiences, “I feel your pain.” Instead, Kennedy asked all white Americans to look at the world through the perspective of those who were different from them and suffered racism. His act of faith was that if whites took such a step, they would be challenged to think differently.

The day before his Civil Rights speech, Kennedy made an even harder demand on the country. In a commencement speech at American University in Washington, D.C., Kennedy asked Americans to reexamine their attitudes toward the Soviet Union despite the Cold War going on around them.

“No government or social system is so evil that its people must be considered as lacking in virtue,” Kennedy declared. It was possible, he insisted, to hate communism but admire the accomplishments of the Russian people and recall their suffering in World War II when they were America’s allies.

Kennedy’s three June speeches paid off, even though he lived to see only one realized. That summer the United States, the Soviet Union, and Great Britain took an important first step in reducing Cold War tensions by signing a treaty outlawing nuclear testing in outer space, underwater and the atmosphere. The following year, Congress passed the Civil Rights Act of 1964. In 1989, the Berlin Wall came down.

Kennedy’s politics of the moral imagination had not been naïve, and at a time when too often we are exposed to a political scene that asks us to choose between being winners or losers, Kennedy’s example offers an alternative to the present without our needing to ask if there is a JFK among us.

Nicolaus Mills chairs the literature department at Sarah Lawrence College and is the author of Winning the Peace: The Marshall Plan and America’s Coming of Age as a Superpower. 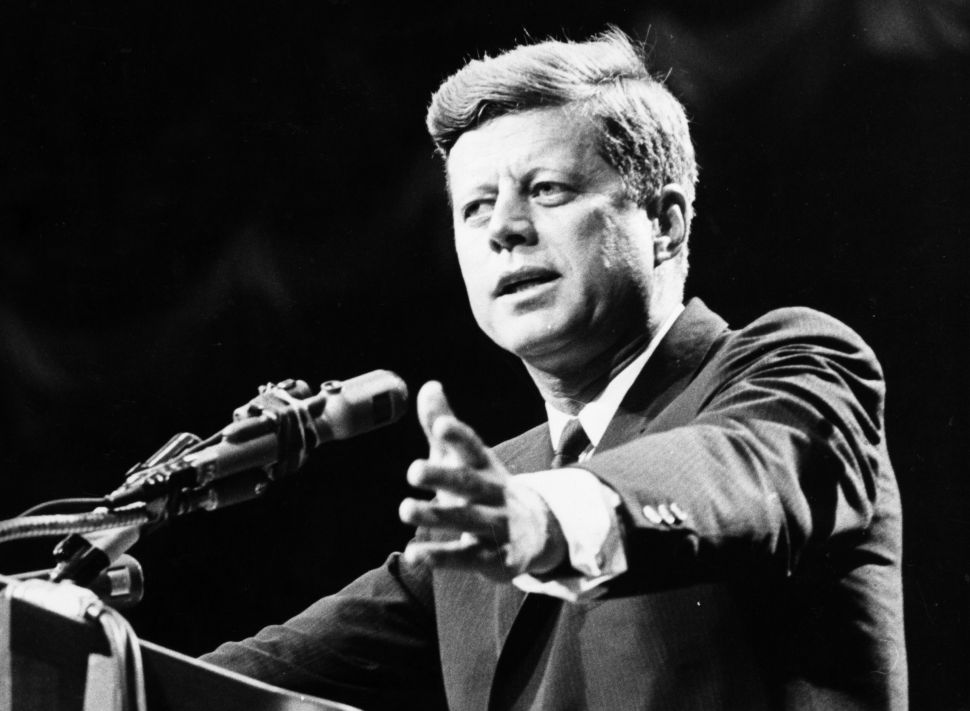