Barack Obama might have some competition for his Best Instagram Husband title. While the former president proved his picture-taking abilities with Michelle Obama while aboard a yacht in French Polynesia, Kristen Stewart took it to a whole different level with her girlfriend, Stella Maxwell.

Maxwell and Stewart proved that even celebrities aren’t immune to the perfect photo op, and sometimes you have to just do it for the Insta. Maxwell has been visiting the Twilight star in New Orleans, where Stewart is filming Underwater. This week, it seems the couple had to deal with some traffic as they drove around in a black SUV.

Some might just lament how annoying it is to be stuck in a car at a standstill, but Stewart and Maxwell decided to have a photoshoot instead. While Maxwell leaned out one side of the car, posing in shorts, an unbuttoned denim jacket and a black bra top while holding a coffee cup (showing some seriously impressive multitasking abilities), Stewart leaned out the other side, dutifully snapping pics of her Victoria’s Secret model girlfriend.

Perhaps they were taking some new photos to put in the home they’re now cohabiting, as Maxwell recently reportedly moved in to Stewart’s four-bedroom Los Feliz house.

They even examined the photos once they exited the car, though sadly we haven’t yet spotted the photos on social media just yet. Stewart doesn’t have a public Instagram account, but Maxwell updates hers relatively frequently, but mostly with glamour shots.

We suppose we’ll just have to keep checking Maxwell’s Instagam page to see if the car photos emerge. Maybe they’re just taking a cue from Bella Hadid and going for the #latergram. 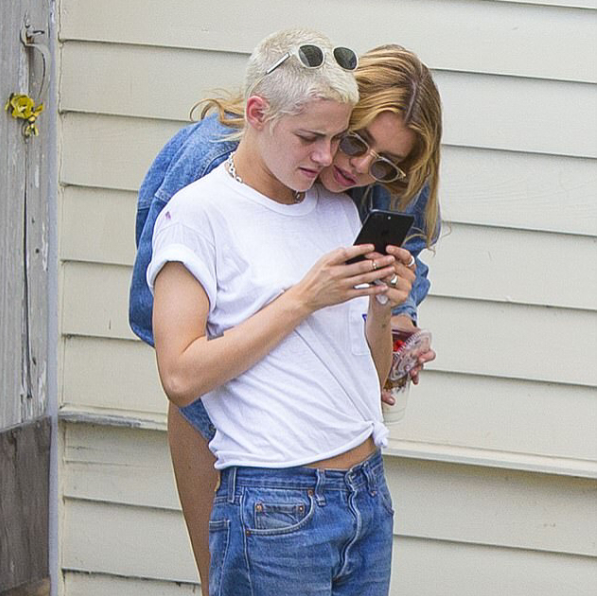